The Barcelona Free Trade Zone Consortium and Mercabarna have reached an agreement for the land sale which will allow the Barcelona food market to face a new stage of growth. The operation, which includes a total of 173,194 square meters, which is equivalent to a growth of 22% of the current occupied space, allows unlocking the growth plans necessary to consolidate Mercabarna’s transformation into a new stage of modernization and change of consumption habits for those that need to be adapted. The expansion frees up the wholesale food market to face ambitious development plans and ensures the Mercabarna expansion for at least the next 10 years.

The price paid by Mercabarna will exceed 69 million euros, capital that represents a new injection of capital for the CZFB in its strategy of diversification of activities and commitment to Economy 4.0. The special delegate of the State in the Consorci de la Zona Franca de Barcelona, ​​Pere Navarro, wants to consolidate the CZFB as a public entity beyond the real estate agency, in the direction of being a true protagonist of the reactivation of the new economy, especially of the one linked to additive or 3D manufacturing. The organization of the BNEW hybrid congress held recently in Barcelona fits perfectly into this business positioning of the CZFB as a catalyst and meeting point for various economic sectors and a leader in free trade zones in the world.

For Mercabarna, whose CEO is Jordi Valls, the signing of the extension agreement ends a long negotiation journey in which price was the most important obstacle. Plot 22L has a multitude of occupation applications and may be the appropriate lever to diversify the type of companies established in Mercabarna. It will make it possible to adapt this macro food infrastructure to new consumption habits and those that have to arrive in the coming years.

The current companies occupying the space will either continue in it or will be relocated if possible. Existing rental contracts will be honored in a progressive transformation process. The companies established in Mercabarna have a global turnover of more than 5,500 million euros, making Mercabarna the second most relevant business player in Catalonia, after Seat. A commercial city that employs 7,500 people.

Mercabarna’s net income was 22.5 million euros in 2020 (with a total turnover of about 40.7 million) and profits that have ranged in recent years between four and six million euros. Last year, accounting losses of 6.8 million were recorded due to the impact of the slaughterhouse closure (without this effect, the benefits would have been 5.2 million).

The current year will have an extraordinary injection of tax benefits of about five million euros, which is why it is the ideal time to assume the purchase of the CZFB land. The shareholding structure is solid, since the shareholders are the Barcelona City Council (Barcelona de Serveis Municipals has 50.69% of the capital), Mercasa (36.79%) and the Generalitat (12.16%). The rest is treasury stock.

The 22L extension is added to the remodeling of the space occupied by the slaughterhouse, of about 30,000 square meters. As a result, having 97% of the space occupied, the management team led by Jordi Valls, general director of Mercabarna, has under its baton the possibility of redrawing Mercabarna’s activity for the coming years with more than 200,000 additional square meters to allocate and new rental income. 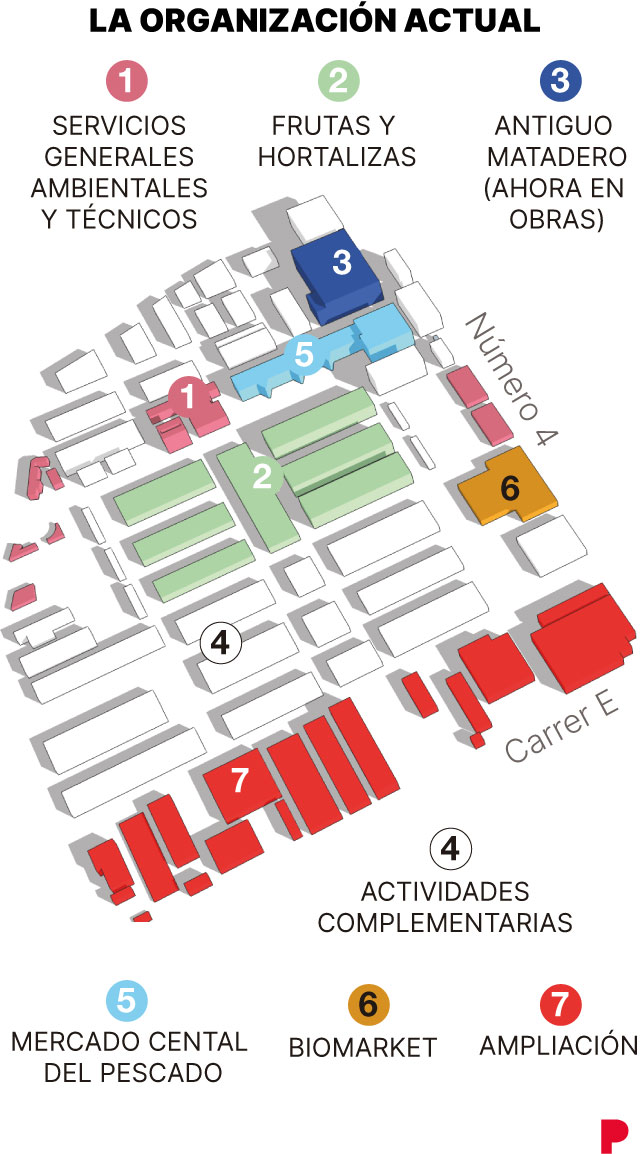 The objective of the expansion is to improve commercial activity and offer synergies for the restaurant sector and distribution chains. At a time when regional supermarket chains are consolidating their position in the distribution sector, Mercabarna is a reference in the supply of quality products. Under the premise of respecting the signed contracts, the leasable area will increase, although it is not expected that Mercabarna’s turnover will grow to the same extent since the commercialization and remodeling will be done gradually.

Mercabarna’s investment plan for the next five years amounts to around 200 million euros, which makes this commercial infrastructure the most relevant in the Catalan business universe. These investments will go hand in hand with European Next funds.

Mercabarna’s great transformation involves a generalized technological improvement that allows information on the evolution of market indicators to be available in real time. From the control of mobility and telecommunications to the monitoring of the traceability of goods. Exports is a chapter that will also grow in Mercabarna in five years’ time.

The BIO gives way and new trends are promoted

The areas to be promoted in the new spaces will be varied. The BIO market has collided with the pandemic and some consumers who have not endorsed expectations before the crisis. Therefore, it is foreseeable that conceptually those BIO labels will be reinvented in a way that is permeable to consumer habits and that Km0 will gain weight in the market, healthy food in general terms. Fresh produce, ready-to-eat products such as salads, and even fifth-range products (cooked or precooked for restaurants) will have to be promoted in the enclosure. It is also planned to allocate a space for start-ups, intermodal agrologistics companies, e-commerce platforms for fresh products, new product lines for vegetarians and service companies of all kinds for the food sector.