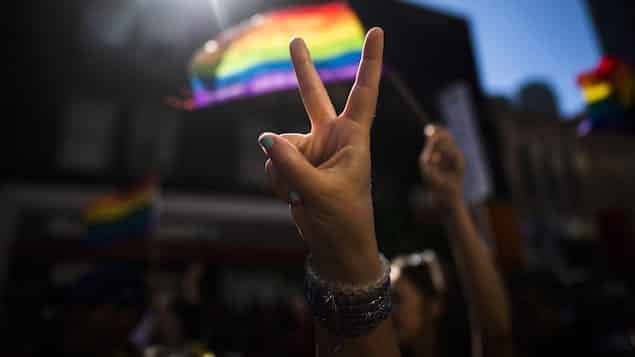 It will certainly be full of people who will return with renewed vigor and people excited to see and rub shoulders with the community after these two years at a distance.says a smile Ace Mann, who sits on the board of the Pride Society of Victoria as secretary.

editor’s note In order to respect the neutral gender of the people quoted in this article, the personal pronoun iel has been used to speak of a person, whatever their gender, as defined by the Robert dictionary.

He points out that the community of Victoria is particularly diverse. Indeed, according to the latest census statistics, the capital has the highest concentration of transgender and non-binary people in Canada. It’s awesomesays Ace Mann.

Ace Mann is working with the Pride of Victoria Society to develop the festivities to be held from June 23 to July 2 in the capital.

The traditional parade will take place this year in the presence of drummers from the Songhees First Nation. He will cross the Johnson Bridge before heading towards the parliament and then joining the celebrations which will be held in MacDonald Park, in the James Bay district.

For Éric/Érica Thompson, who uses two different first names in keeping with her gender fluidity, this will be her first appearance at Pride festivities in Victoria. In the capital for a month, it will be an opportunity for them to meet part of the population.

To see these parades and these events gives visibility to the community and demonstrates that these people can live a normal and happy life. And for the youngest who question themselves, who have doubts or who are ashamed of who they are, who are perhaps afraid to come out of the closet, it gives them a glimmer of hope.he underlines, explaining that this visibility has been beneficial in his case.

” We must not forget that these parades were originally protests, demonstrations to defend the rights of LGBT people. »

After the threats, the wave of love

The cancellation of a drag queen show, scheduled at Caffè Fantastico in mid-June due to violent homophobic and transphobic threats, has upset several members of the city’s 2SLGBTQ+ community, but also rallied the population.

It brought out the mother bear in me. If any member of the community here has no parents or no one to protect them, come to me, I will be your parent, I will protect youassures Ace Mann, his voice charged with emotion.

Even if the art of drag is more and more popular especially since it is on the small screen, Alex Pilon, alias Johnny Poutina, is not very surprised by these threats. For him, this is a sign that there is still work to be done.

We don’t do anything wrong when you think about it, I’m putting on a wig and a dress! I don’t hurt anyone. But it challenges people’s closed ideas and I think the festivities bring those conversations. Whether you agree with it or not, we’ll talk about itexplains the drag queen from Nelson who will be visiting Victoria for a few days as part of the festivities.

Security will still be increased by prevention during Sunday celebrations, warns the Pride Society of Victoria.

We have increased the level of security for several reasons, but we also do not want to take any risks. This is a celebration of love and acceptance and that’s what we want. We have zero tolerance for negativitysays Ace Mann.