The mobilization this Saturday in support of the victims of ETA has further widened the gap between the right and the left. While PP, Vox and Citizens They concentrated in different parts of Spain to express their rejection of the acts of support for the terrorist Henri Parot, the PSOE chose to remain silent, to the greater derision of the victims’ associations, which criticized Pedro Sanchez for his “permissiveness” in the face of this type of “humiliation”, as well as for “making a pact with the devil”, in reference to eh Bildu.

The coalition that coordinates Arnaldo Otegi encouraged to attend the various events organized by Sare, a pro-ETA platform, to demand the release of the author of 39 murders, although they were finally replaced (in the face of social and political pressure) by rallies in different towns against “life imprisonment” for ETA prisoners. And all this without the government party having anything to say about it.

A silence that was only broken by two socialist barons: the president of Castilla-La Mancha, Emiliano Garcia-Page, and that of the Government of Aragon, Javier Lambán, who criticized the vindication of “blood and cold-blooded murder” with the tributes to Parot, which represent “a humiliation” to the victims of ETA.

An attitude, that of the PSOE, which clashes a lot with that shown this Saturday by the right, present in practically all the manifestations of reparation to the victims of Parot held in different parts of Spain: Madrid, San Sebastián, Zaragoza, Granada and Arrasate / Mondragon.

In this last town, belonging to the province of Guipúzcoa, there were incidents, police charges and races, in which an old man was injured, after during the entire concentration of radicals abertzales They rebuked and threw objects at the members of Vox, heavily guarded by the Ertzaintza.

There Santiago Abascal He denounced the “permissiveness” of the institutions and the “complicity” of the President of the Government, Pedro Sánchez, with a “permanent act of exaltation of terrorism, of vindication of each one of the crimes of the terrorist group ETA”.

In Móndragón (Guipúzcoa) together with the victims of separatist terrorism and against the tributes to the ETA gunmen.
ETA’s votes have made Sánchez president and he tolerates indignity.
We will not be silent even if the finger threatens violence, censorship or illegalization pic.twitter.com/115WQRAXoY

An hour and a half before, also in the Guipuzcoan municipality, the PP Vasco was concentrated next to the factory where ETA held the prison official kidnapped Jose Antonio Ortega Lara and to the industrial Julio Iglesias Zamora.

From there the vice-secretary of Organization of the popular, Ana Beltran, accused Sánchez of “being with the executioners”, with “the heirs of ETA” and not “with the victims.” “Sánchez blanches them, runs his hand over their backs,” said Beltrán in reference to the pro-ETAs, “his preferred partners.”

“Pact with the devil”

And it is that the allusions to Bildu, a regular partner of the current Government of Spain since the investiture of Pedro Sánchez, were constant throughout the day. The Association of Victims of Terrorism, which held a ceremony in Madrid together with PP, Vox and Cs, said that the president “pacts with the devil” in order not to leave “his chair in Moncloa”, although “the price is the victims of ETA “. 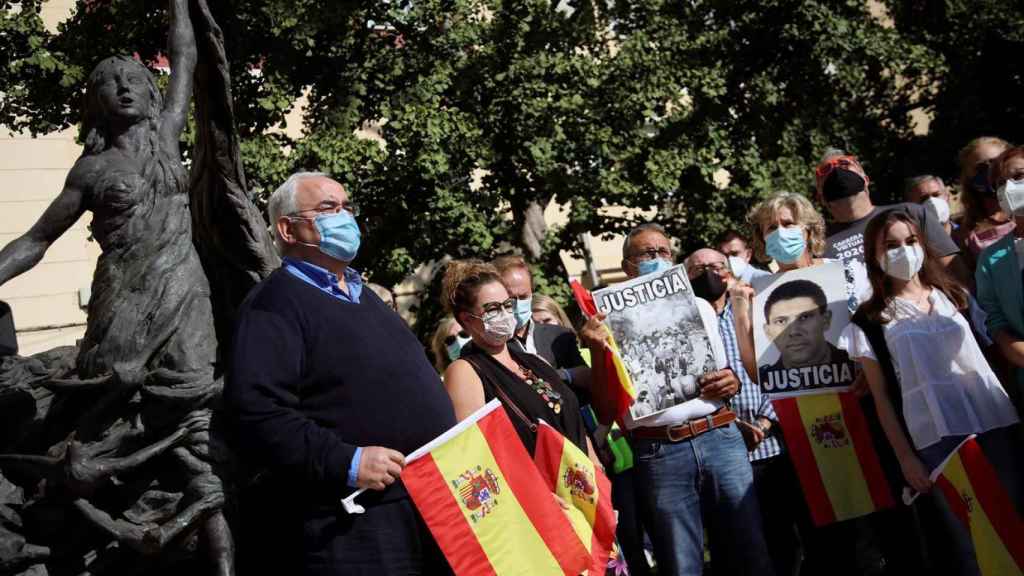 Members of the Association of Victims of Terrorism during the demonstration.

The president of the AVT, Angeles Pedraza, regretted that the Central Executive did not cancel the acts of “exaltation and public justification of terrorism”, and assured that the victims feel “cheated, humiliated and vilified.”

After a wreath at the monument to the victims of the attack in the Plaza de la República Dominicana, the mayor of Madrid, José Luis Martínez-AlmeidaHe pointed out as “a problem” that “they are tolerated, protected” by the pro-ETAs who exalt Parot before “the heartbreaking silence for the victims” on the part of the Government of the nation.

Social pressure has achieved what the Government has not done, to stop today’s tribute to the terrorist Henri Parot. pic.twitter.com/kpoCk1nav6

Representing Citizens, Edmundo bal he condemned the “impudence of wanting to pay homage to the most bloodthirsty ETA member of all time” and called for the elaboration of a regulation that prevents “praising those who were the executioners” and “re-victimizing those who suffered the loss of loved ones.”

What the Cs spokesperson in Congress is asking is, in reality, a constant demand from the associations of victims of terrorism: that acts of exaltation of terrorism, as well as acts of terrorism, be outlawed. welcome, which is the name for the tributes to ETA members who come out of jail that are carried out in towns and cities of the Basque Country.

These acts have always taken place with the approval or direct participation -through Sortu- of EH Bildu. The coalition coordinator himself nationalist, Arnaldo Otegi, He threatened that they would continue to be carried out as long as prison policy did not change: “There are 250 prisoners and there will be 250 receptions.”

The associations of victims of terrorism, such as Covite or AVT, have for some time been calling for its banning and denouncing to the National High Court acts that they consider to constitute crimes of glorification of terrorism and humiliation of the victims.

But Ministry of Interior it hides itself in the fact that it “has no legal instruments” to prohibit them. Inaction and silence in the face of acts that widen the gap between the right and the left, or between the latter and the victims of ETA terrorism.