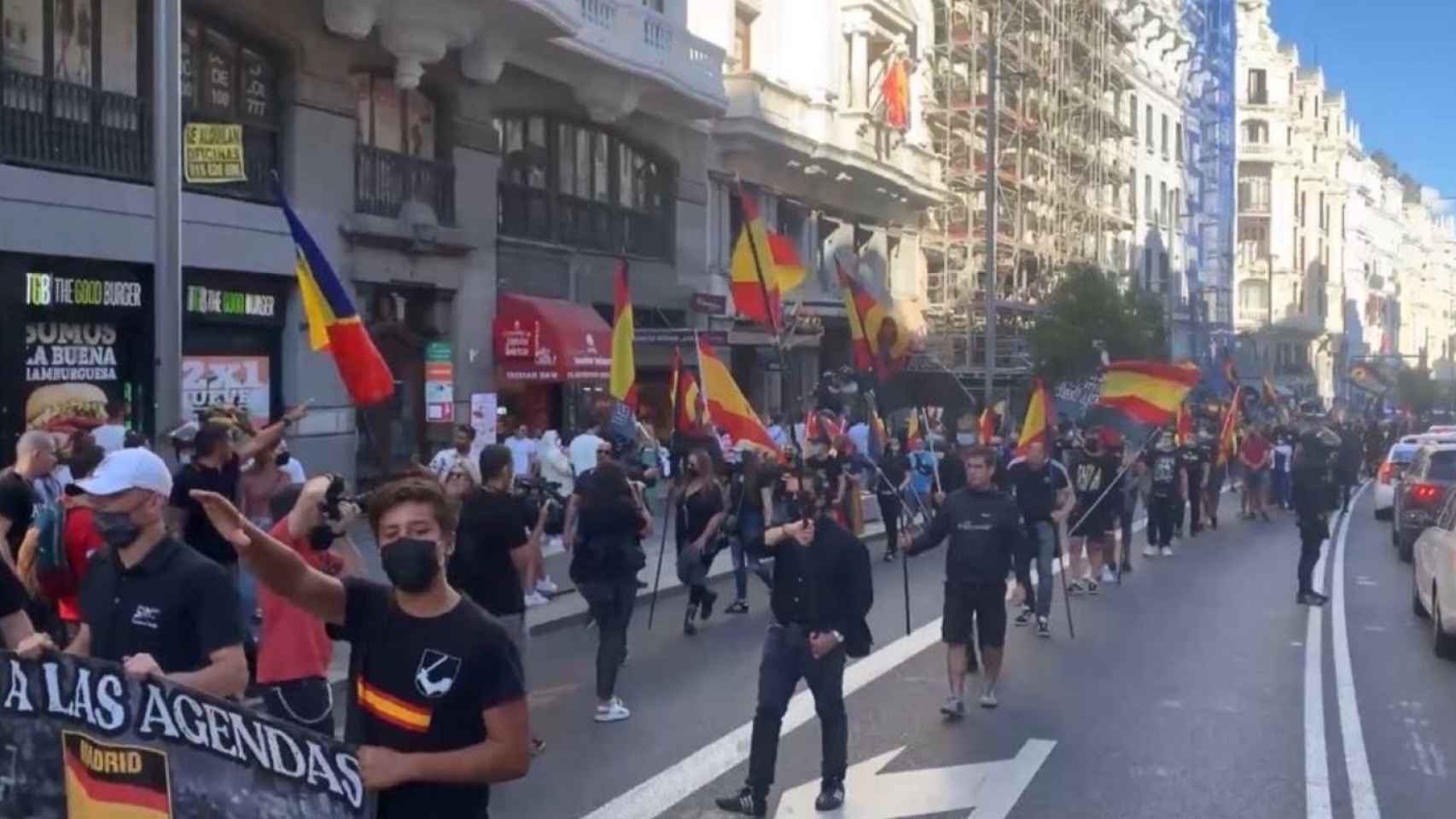 The demonstration planned by the far-right platform Madrid Seguro, which took place this Saturday the 18th in the busy Madrid square of Chueca, has led to a controversy that has regenerated the homophobia debate in the Community of Madrid.

Around fifty neo-Nazis integrated into the protest, which sought to condemn the government’s planning of the ‘2030/2050 Agendas’, have chanted homophobic chants in its streets: “out of our neighborhoods fagots” O “out, sidosos, from Madrid”. Allegations that have flooded social networks with videos that have once again pointed to the president of the Community, Isabel Diaz Ayuso, as a target of controversy.

The left considers Ayuso a direct accomplice of Vox’s demands by not fighting the growing hostility towards the LGTBIQ + collective, mainly after the latest controversies and attacks.

Neo-Nazis in Chueca parading shouting “out, queers from our neighborhoods” https://t.co/zXmLR2PPhv

The reactions did not take long to follow, with Íñigo Errejón, a deputy from Más Madrid, the first political profile to pronounce on the neo-Nazi chants on his personal Twitter account. “These mindless men who shout their arms up ‘out of our neighborhoods’ are only the spearhead of the reactionary wave. Some point out the most vulnerable while others play at equidistance. We must defend freedom, street by street,” He has written.

Your political training partner, Hugo Martinez Abarca, has been more direct and has taken the opportunity to recall the words of the president of the Community of Madrid, who last Thursday claimed that “homophobia only exists in the head of the left.”

“Homophobia only exists in the head of the left.” Isabel Díaz Ayuso, two days ago. https://t.co/nGowyArIPi

The former deputy of the PSOE in the Assembly of Madrid, Carla Antonelli, has also pointed to Ayuso as the architect of the growing homophobia and the increase in aggressions towards the group in the Community of Madrid. Antonelli affirms that, according to the president, “” homophobia “only existed in our heads”. The former deputy has also pointed out to the mayor of Madrid, José Luis Martínez-Almeida, for having insinuated that it was “an exaggeration to point to the extreme right” as an inciter.

According @IdiazAyuso “homophobia” only existed in our heads and to @AlmeidaPP_ It was an exaggeration to point out to the extreme right incitement hatred, I don’t know if these neo-Nazis who right now are in Chueca shouting “out of our neighborhoods” and “out of Madrid AIDS” ✋ https://t.co/8vu73BMOJd pic.twitter.com/GiTe7kcdgf

The Minister of Equality, Irene Montero, has reacted to the news with the following message: “Institutional unit to protect LGTBI people and all their rights. You are not alone. Nazis never again.”

Institutional unit to protect LGTBI people and all their rights. You are not alone.
Nazis never again. https://t.co/fzEHZ0DrlU

“Homophobia is in the head of the left”

Both Carla Antonelli and Abarca have appealed to the speech that Isabel Díaz Ayuso made last Thursday in the control session in the Madrid Assembly, in which she affirmed that “homophobia is in the head of the left” and that the Community of Madrid “It is safe, open and respectful.” “A Community where one of the most important parties that have been claimed is the freedom of homosexual and transsexual people, after 20 years of freedom with the PP, “continued the president.

Another allegation that generated some controversy was the idea that, since his mandate began, “for the left, Madrid is a region of drunkards and homophobes. They want to win that way, but they are not going to do it even to the plates with that attitude.”

The Malasaña case, in which a 20-year-old man made a false complaint of homophobic assault at the hands of eight hooded men, it was used by the left as a dart aimed at Ayuso. The Minister of Equality was, precisely, one of the most critical figures with the president.

Monteró posted a video in which he spoke of how the permissiveness of “hate speech” in politics enhanced homophobia towards the group. When the nullity of the complaint was known, the minister seized on the recent data: “Hate crimes against the LGTBI community have increased by 43% in the first half of 2021. That the tree does not prevent us from seeing the forest” he admitted.

Ayuso reinforces the presumption of innocence with Vox

The president of the Community of Madrid announced last Thursday that she intended to propose a modification of state regulations to make the presumption of innocence “more effective” and put an end to “false complaints” after the case of the young Malasaña complainant.

Ayuso thus responded to the question of the Vox spokesperson, Rocío Monasterio, about whether the Government was willing to modify the laws in force in the Community that did not respect the presumption of innocence.

The Madrid president alleged that, two legislatures ago, the Popular Party saw with good eyes the search for a consensus among parliamentary groups to try to end discrimination against homosexuals and trans people, and that is why the LGTBI laws were approved.

“However, this is not always effective,” the president explained, arguing that neither homophobia nor aggression will be “corrected” through a law because “feelings and emotions” cannot be reflected in a text, for what “good performances and normality have to be” what must prevail.

Monastery celebrates that Ayuso “shares” Vox’s position regarding the presumption of innocence and has asked him to “be consistent” and repeal the regional LGTBI laws and not be “like Mayor Carmeida or the PP of Genoa” who says some things and “does the opposite.”