With the motto “Cooking is remembering”, Mrs. Rosa reveals secrets of her pregnancy from Jenni Rivera while preparing chicken broth, in addition to confessing that she only ate “pure broth” during that stage of her life.

Through your page Facebook, Doña Rosa Rivera Cocina, the mother of La Diva de la Banda surprised her followers with her recipe for this delicious dish.

Before starting, Rosa Rivera, who wears a colorful apron with the legend “The Great Lady”, clarified that this nickname was given to her by her daughter Jenni when she composed the song of the same name.

After washing the chicken, it is placed in the water to cook it. At that moment, Mrs. Rosa recalled anecdotes about her mother and mother-in-law, who “fought” over the way each of them cooked the chicken.

Afterwards, salt and three garlic are added to the chicken, as well as a piece of onion and wait for it to boil. This moment is used to chop the vegetables and then fry them.

“It is a different broth, it is a different chicken. The only thing I put on it are potatoes, carrots and celery, which is how I know how to do it, ”said Jenni Rivera’s mother.

Concentrated on the preparation of this dish, Mrs. Rosa shared that every occasion that she prepares certain dishes, she brings back a memory. Keep reading…

“I didn’t eat any meat, no chicken”

“I remember when I was pregnant with my daughter (Jenni Rivera), I did not eat any meat, no chicken. For example, if I made chicken broth, I would only eat the broth and not the meat. So, if I ate meat or cooked, I would eat pure vegetables, pure broth, ”said Mrs. Rosa.

As if that were not enough, the singer’s mother revealed that during her pregnancy with Jenni, she did not eat meat, fish, or chicken, only vegetables, beans, eggs and potatoes. 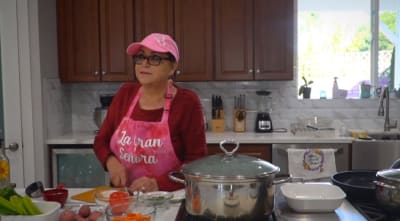 Of the reason why he decided to share his recipe for chicken broth, he said it was because a girl, who is pregnant, asked him, but it was inevitable that he remembered more anecdotes.

To continue with this recipe, Mrs. Rosa waited for the chicken to boil so she could froth it.

Besides, olive oil is put in a frying pan to cook the rice, which has a very particular flavor, and chopped vegetables and tomato puree are added to the chicken, water is added if necessary,

When the rice and chopped vegetables are ready, add to the chicken, plus pepper to taste and salt, if necessary. 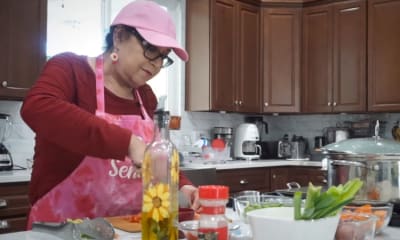 Almost to finish, he added halved potatoes and cilantro. Cook for approximately 15 minutes. During that time, he constantly checks himself and moves. It can be served with corn tortillas, chiltepin or salsa.

Before saying goodbye, Jenni Rivera’s mother thanked her followers for watching her videos, apart from telling them that if they want a special recipe, let them know.