Steven Del Duca took a seat at the head of the Ontario Liberal’s table during one of the most trying times in the party’s history.

After a 15-year Liberal reign in the province, the party was gut punched in the 2018 election and left with only seven seats, just shy of the eight needed to retain official party status.

Meanwhile on a personal note, Del Duca was unseated in his own riding of Vaughan-Woodbrige.

Then, on March 7 2020, he won the leadership of the Ontario Liberal Party just as the world was hanging on the edge of a global pandemic that would deprive humans of physical contact. The new leader spent most of the next two years making public appearances in the confines of a computer screen.

While Del Duca says he first got involved in the Liberal Party when he was 15-years-old, to some his face is still relatively new.

To bring voters closer to the Liberal leader, CTV News Toronto sat down with Del Duca at the end of April to talk about his plans for the party and the province, along with his go-to TV shows to binge.

Here’s what he had to say.

Q: What is your number one issue on the campaign trail?

“My number one issue is to make sure people understand why there is a clear choice in front of them between two options: the Ford Conservatives, who are determined to keep dragging Ontario backwards, and a new Ontario Liberal team with new leadership and a new team of candidates who have the experience and the desire and the talent to start the important work of rebuilding Ontario on day one.

Q: The Liberals have focused on ending for-profit long-term care, academic and applied streaming, boosting PSW pay, and the overall minimum wage, along with banning handguns. Why have these issues been the primary focus early on for your platform?

“I think about things like elder care and the revolution that we need there—the transformation. I think about my own parents who are in their early 80s”

“I think about what we saw during this pandemic with the for-profit long-term care system and how it’s so badly failed our parents and grandparents. When it comes to elder care, in particular, profit and care don’t mix. That’s become abundantly clear. So I’m determined to end that, phasing it out by 2028.” 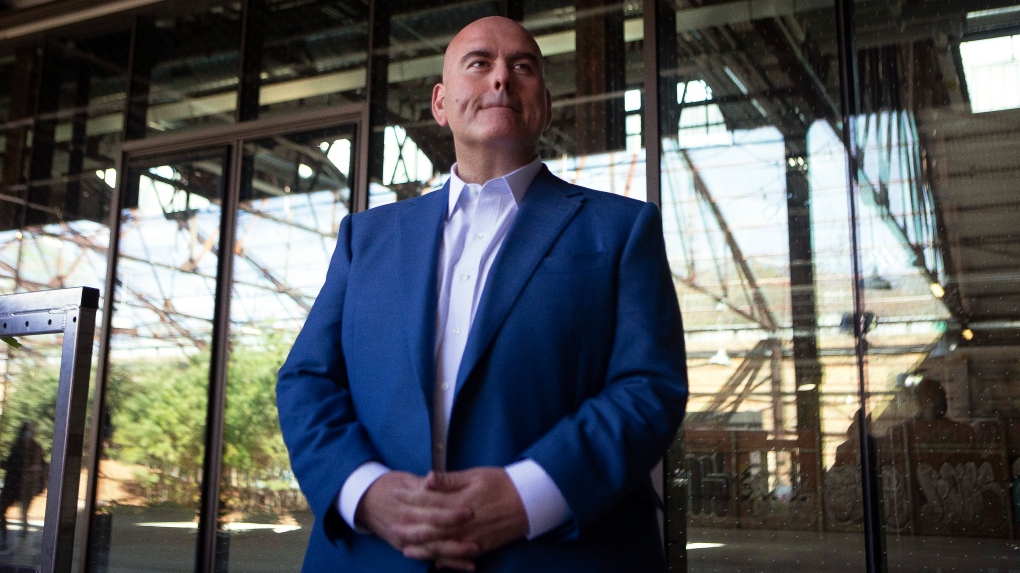 Ontario Liberal Leader Steven Del Duca listens to his introduction before making an announcement in Toronto, on Monday, May 9, 2022. THE CANADIAN PRESS/Chris Young

“When I talk about education, for example, it’s not an abstract concept for me. My daughters attend publicly-funded schools in our home community of Woodbridge. So I know what parents, students and front-line education workers have gone through the past four years where Doug Ford has consistently underfunded and undermined public education.”

Q: It’s been said that you have the toughest job, perhaps out of any new Liberal leader in history. Your party currently has seven seats, not enough for the official party status. Layered on top of that, you lost your seat last time around and your leadership has taken place largely during a pandemic. That’s tough stuff. How do you plan on rebuilding your party?

“That is tough stuff, but there are no shortcuts to success in life. I learned this from my grandparents and from my parents. There are no magic solutions. It literally is just about rolling up your sleeves and doing that heavy lifting and doing the Throughout my life, I’ve been blessed that hard work has never bothered me. In fact, I thrive when. I’m in a scenario or a situation where I am called upon to work hard and to take ownership of my responsibility and my obligation”

“I feel remarkably encouraged about the progress that we’ve made over the past two years as a political party. But I want to stress the reason that I’ve been working this hard and our team has been working this hard isn’t simply to say that we’ve rebuilt the Ontario Liberal Party. We’re not in this to rebuild the Ontario Liberal Party. We are in this to deliver progress for Ontario. That’s what brought me back to this fight”

Q: You spoke a bit about your experience with the Liberals, which is 30 years long. But some people outside of the political sphere might not know your name, it might still be new to them with weeks to go until the election. How are you going to get voters to understand who you are as a leader?

“I’m just going to keep doing what I’ve been doing for the past couple of years. Working hard, making sure that the ideas that I’m conveying to the people of Ontario help them understand who I am, and what I ‘m all about and what my values ​​are.”

“You know, I tell people, and this is the truth, the most important job that I’m ever going to have is as a dad, a dad to two young daughters. I’m a husband. I’m a son. I’m a brother. I’m someone who’s really proud of the community that I come from, really proud to have had the chance to represent Vaughan in the legislature for six years. And I’m hoping to once again.”

Q: If your party is elected, what would you see as the biggest challenge you face?

“I think the challenge is going to be to try to accomplish as much as needs to be done in the aftermath of the disaster that has been the Ford Conservatives over the past four years. The scope and the scale of the challenge will be considerable. That’s why earlier in this interview, I said there’s no time to waste.” 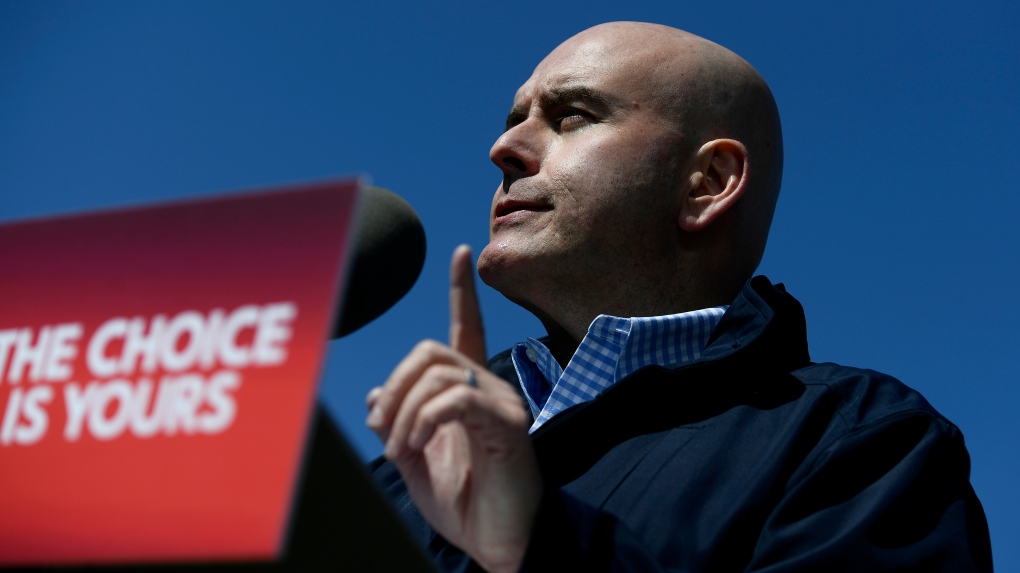 Ontario Liberal Leader Steven Del Duca speaks at a campaign event at a park in Ottawa, on Saturday, May 7, 2022. THE CANADIAN PRESS/Justin Tang

“I learned, we all learned the hard way, four years goes by very quickly. And whether it’s public education, or public health care, or the fight against the climate crisis, or achieving real economic dignity for workers and small business owners, supporting our seniors, when you think about the challenge of how much needs to be done, to once again, get this province on the right track, it is considerable. .”

WHO IS STEVEN DEL DUCA?

Q: What made you interested in running for office?

Q: What is your favorite natural area of ​​Ontario?

“Where I live in Woodbridge, we’re just a few streets away from what’s known as Boyd Conservation Area or Boyd Conservation Park. It kind of flows into the Kortright Center and it is one of the entry points to the Humber River Trail. It’s close by. I love it. It’s beautiful.”

Q: Name one of the things that you love about your riding

“One of the things that I love about Woodbridge, which is where I live, and where I’d be running again, is what I like to call Ontario’s largest small town. It’s a place where the neighbors look out for one another.”

Q: What is your favorite place to visit in Ontario?

“I love Niagara-on-the-Lake, especially the wineries that we have. We’re really lucky to have such extraordinary wineries in our province.”

Q: What was your go to pandemic pastime?

“My gosh, staying off zoom calls, staying away from them. I did a lot of reading. And we spent a lot of time as a family. I mean, I tell people COVID has been horrible. However, the fact that my wife and I were both able to spend a lot of time in person with our daughters, more than would have been the case if they were at school physically all the time and we were doing the work that we do, just getting that time in a way back. We literally could witness how they grew.”

Q: What was either a book or a TV show that you’ve binged during the pandemic?

“The latest book that I just finished is another biography of a former US President Franklin Delano Roosevelt, FDR. I think that’s my 11th or 12th bio that I read up on him.”

Q: What’s your go to caffeinated beverage or snack on the campaign trail?

Q: In one sentence, why should people vote Liberal?

“I think people in Ontario should vote Liberal in particular in this election because we’re in this for the right reasons.”

This profile is one of a three-part series spotlighting Ontario’s main party leaders. CTV News Toronto reached out to Progressive Conservative Leader Doug Ford on multiple occasions, but his party declined an interview request. Responses have been edited for clarity and concision.