It’s bedtime and Curtis McCleary is trying to get Milah, one of his four-year-old triplets to settle in her bed.

“She sleeps alone. If she does not fall asleep first she’ll keep the other girls awake, ”McCleary tells a reporter he has invited into his home.

A few minutes later little Milah opens her bedroom door and pokes her head out. Dad gently coaxes her back to bed, the other girls, Miyah and Miliyah, observing with wide-eyed wonder as their sister gets into mischief.

When he’s not busy chasing after the youngsters in the three-bedroom unit you’ll see Curtis McCleary wheeling his daughters around Toronto’s Regent Park neighborhood in their covered wagon.

He’s somewhat of a unicorn. McCleary, 29, is a single father of triplets. And a widower.

The girls keep him running. He gets up around 4:30 am during the week so he can make them breakfast and get them off to junior kindergarten.

He’s juggling their hectic routines – and their high energy levels – on his own.

“In the morning I play music to get myself amped up. ‘Lose Yourself’ by Eminem is one song I use, ”McCleary explains. 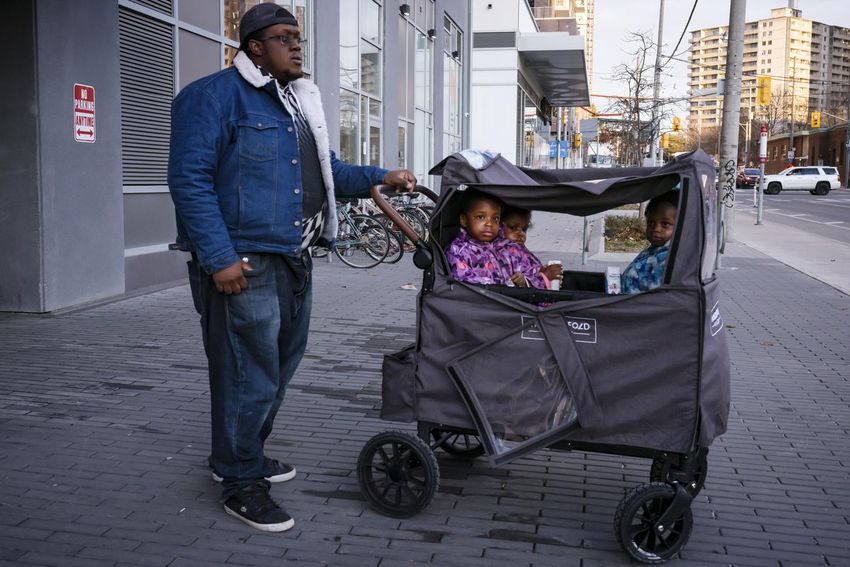 But since that time he has received an outpouring of support from people in Regent Park and beyond who’ve been moved by McCleary’s story and his battle against adversity. That support has also come from some unexpected corners including a Toronto police officer.

With the help of her husband Bentley, longtime Regent Park resident Denise Campbell, a manager with the City of Toronto and herself a mother of multiples, twin boys who are three and a half, managed to organize a fundraising drive that raised money last summer to buy a top-of-the-line four-seater wagon for McCleary’s girls.

Campbell took the steps after seeing McCleary in the community transporting his youngsters in a broken wagon.

“I reached out to all the (moms of twins) I knew in the area … I reached out to some neighbors, friends who did not know him but who appreciated the idea of ​​what I was doing. People were generous, ”Campbell says of residents in Regent Park, a large downtown development that has undergone a revitalization that transformed it into a mixed-income neighborhood of condos, townhouses, seniors’ residences and rent-geared-to-income units.

There was even money left over from the fundraising, some of which has gone to backpacks and clothes for the girls.

After meeting him and his girls for the first time two Christmases ago, Const. Mariya Zasheva developed a close bond with the family. The married mother visits them several times a month, including with her own girls, aged 12 and 19. She has purchased items for the triplets including toys, shoes, socks and mittens. She also reads books to them.

“I do not do this for glory or fame. I do it because the girls need someone and I’m that person. I feel privileged to help them out, ”says Zasheva, who works out of 33 Division.

McCleary says he’s “more than grateful” for the helping hand from everyone, including the Toronto constable.

“I do not know what I can do for them to make up for the generosity they’ve shown me,” he says.

McCleary met his common-law wife, Juleesia, in 2016 after he introduced himself to her at a gathering in Toronto.

“I made her laugh and she slowly started warming up to me,” he recalls.

Juleesia had health problems when they met – epilepsy – and he ended up caring for her during her bouts with the illness early on in their friendship.

In one instance, he stayed in hospital with her overnight, which she appreciated.

“She told me no one had ever done that for her. She said she was starting to have feelings for me, ”he recalls.

They started dating around this time and a short while later she was pregnant.

She went for an ultrasound.

After the appointment, McCleary, who was doing general labor in a warehouse at the time, got a call from her while he was at work.

“She said she had some news about the ultrasound that she needed to tell me when I got home,” he says.

He remembers the exchange that evening:

He was thrilled and excited about the news, but in such disbelief that he went to her next doctor’s visit just so he could confirm the results for himself.

He decided to take on extra hours at work. He also contacted a friend and lined up home renovation jobs for additional income.

“I had a good bundle of money for the kids,” as a result, he recalls.

When the babies came on May 30, 2017, they were four months premature.

And their delivery was sudden, so much so that McCleary did not get to the hospital in time and missed the whole birth.

A few years later, when the children were age three, tragedy struck. Juleesia took ill and died at home. The cause of death was complications due to diabetic ketoacidosis.

“I felt so bad for my kids. What was I going to do when they asked me where their mother is? On Mother’s Day they’ll see kids making cards, ”he recalls thinking at the time.

And when they were smaller there were sudden tears from the girls when they saw other kids with moms.

The family lives in a unit in one of the new highrises in Regent Park, near River Street and Dundas Street East.

McCleary’s 4:30 am start with the girls during school days can include cooking their favorites, such as eggs and waffles, or Jamaican dishes such as fried dumplings or ackee and salt fish.

He has also learned how to take care of the girls’ hair, in large part by watching YouTube videos and getting tips from Leonie, a sister.

Life is not easy for McCleary. For one thing, all three of the girls have autism. The signs of autism, which can cause significant communication, social and behavioral challenges, are most apparent in Milah, who is non-verbal as a result.

Through a referral, McCleary and his daughters have, for over a year, been getting support (virtually, due to COVID-19) from Surrey Place, an organization that helps people with autism, visual and developmental impairments. The girls get speech and language support and occupational therapy.

McCleary says he uses some of the techniques when he’s alone with the youngsters.

He’s trying to teach them to write their own names, identify objects that he points to, such as a picture of a cat or a butterfly, and he’s showing them how to pull over the Velcro to fasten their little shoes.

“I’m getting them to take their time and not to give up when they can not do something,” he says.

For Milah, this entire process is harder because of her speech deficit.

COVID-19 and the recent school closures that had children in Ontario learning online earlier this year meant McCleary really had to stay on his toes in terms of their learning.

The triplets used their tablets to get their online lessons. McCleary sat them apart at home and monitored them closely because each of them was interested in what was on the others’ screens.

“I would be listening to what they were doing in class and when they were done then I would teach. I would literally sit down with them and make it fun and interactive. Milah likes the sensation of touching for instance, so I would find objects for her to touch, ”he says.

Zasheva, the Toronto police officer helping out on her own time, was introduced to the family when she was a parole officer, prior to joining the police service. It was two Christmases ago and she wanted to donate to a family. A police officer assigned to cover Regent Park suggested McCleary and his kids.

“These girls needed attention from a female. I fell for those girls, ”the officer says.

Zasheva is always off duty and out of uniform when she spends time with the girls and their dad.

“I love them and they love me back. What else can someone ask for? ” the officer says.

Campbell, who helped get McCleary the wagon, says she’s impressed by how he’s holding up given his situation.

“I’m amazed at how well his parents and how well his girls are doing. He’s an incredibly resilient parent and there’s a lot that we can learn from him. ”

Nemoy Lewis, an assistant professor at Ryerson’s school of urban and regional planning, argues that examples like this of social cohesion – people living together, sharing a sense of community and supporting each other in times of need – have always been present in Regent Park, long before the community was remade in the past decade and a half into a cluster of mixed-income housing for people of varying economic backgrounds.

McCleary also gets support from family, including one of his sisters, Leonie, 31, a health data analyst at Sunnybrook Hospital.

“It’s not easy to raise one kid, much less three. He’s doing his best to get them ready for school and everything else while still grieving, ”Leonie says.

She goes on to say that her brother’s personality has helped him be successful with the girls.

“Curtis is funny. He loves to entertain and make people laugh. He was like this from when he was young. And we always thought he was going to work with kids. He was always drawn to taking care of kids, ”she says.

And it’s the little things he does for his daughters that show they’re in good hands, his sister adds.

“Over the summer he went to buy clothes for them and he called me to show me the clothes on a video call and ask me if I thought he did a good job. As a guy he picked out some cute things. I saw how excited he was shopping for them, ”Leonie says.

Currently, McCleary is training to become a security guard.

In a candid moment, he admits he does get lonely for adult companionship sometimes. But he has started talking to a woman and things seem to be going well, he says.

“She knows I have three kids. She knows the whole story, ”he says.

“(They) inspire me to be a better dad. When I feel like I can not do something they cheer me on. When I’m sad they know how to make me happy, ”he says.

“We bring out the best in each other.”