II Symposium of the Health Observatory. Some have taken the observatory very seriously. TO Margarita del Val, Iñaki Comas and Ricardo Pujol (The scientists) have only needed to bring the microscope, because they have done nothing more than observe and annotate during all their sessions. Look ahead, pay attention to the speaker and return to the notebook. This is how the morning and afternoon of the first day have passed, which ended almost late at night, at around 8.30 pm.

Due to the good schedules and the lightness of the program, it must be that the president of IDIS, Juan Abarca, has referred to this event as “congress”. But be careful, without missing and with love. If not, ask these humble moderators who we observe from the stage everything that is cooked in the auditorium while we look at the clock to see how to cut our guest and comply with the stipulations.

The great thing about being the presenter is that you see what others miss. Like the pride of the Minister of Health, Carolina Darias, when she recounted her trip to Rome last week at the inauguration. There, his colleagues from the G20 asked him about “the Spanish miracle” given the speed of vaccination. She, says, replied that there was no miracle formula. Quite the contrary: “It is the National Health System”, he told his colleagues in other governments.

If the minister was full of pride and satisfaction, you cannot imagine how the rest of the room was. And it is true, we have reason to be happy and stop flagellating ourselves permanently, as Pedro J. recalled in the opening greeting.

Some of the architects of this process were there, with the Director of Public Health at the head – and whom the minister thanked for her work. Also the brand new president of AstraZeneca in Spain. Ricardo Rafael Suarez He says he came to see Darias, although we fear that he actually wanted to gossip about what he was going to find in his speech this Tuesday.

Not only them. The entire sector has passed through the auditorium of the Camilo José Cela University (UCJC). From Luis Cortina, CEO of Siemens Healthineers Spain, to Jesus Ponce, President of Novartis in Spain; Margarita López Acosta, general director of Sanofi in our country; Pablo de Mora, CEO of Sobi, or Miguel Fernández Mayor, CEO of Merck, among many others were present at the inauguration.

Everyone was watching the minister, who spoke after the director of EL ESPAÑOL. Pedro J., who after seeing how Madrid in basketball was doing this weekend with the Super Cup, used a sports simile to tell us that We “play on the attack” against Covid-19 and not on the defensive like a year ago and that is why the “pandemic is not going to defeat humanity.”

Everything was going smoothly under full sail, except for the weather, until the Deputy Minister of Health of the Community of Madrid arrived. Antonio Zapatero has put the spice of the day by demanding that the judges not get involved in taking sanitary measures against the pandemic; and by refusing to allow citizens to lose their “freedom” with the Covid-19 passport.

The intervention generated debate. Not only at your table, but also at food. There some hospital managers (we will not say who to save the off the record) They recognized that measures had been taken violating all kinds of rights… Something that should be avoided now that it seems that the pandemic is under control.

At the time, others were screaming Long live the Covid Passport! Metaphorical screams, it is understood. Do you have a future? Here the experts say not much, but beware that the French seem to love it.

The president of the French Hospital Federation explained it, Frederic Valleteux, who spoke with national pride about how well French hoteliers manage to ask their customers for the vaccination schedule. Can you imagine Manolo, the one from the bar of a lifetime, passing the QR with his vaccination passport? We don’t see it around here.

Scientists don’t see the situation rosy either. They have warned: the coronavirus is just the pandemic that has broken out. But there are more pathological ‘mines’ to explode. In fact, Margarita del Val assures that there are already some other known infectious agents with “enough capacity to give us a slap like the one that this pandemic has given us.”

Also attentive to bacteria resistant to antibiotics and infectious diseases carried by mosquitoes that are ‘moved’ by climate change and global warming.

Goya to the disease revelation

Cuban López Collazo adds another candidate to star in future health crises: “Deforestation has exposed our species to viruses that we have never seen. This is where the next pandemic may come ”. If they were the Goya, this would be the award for the best revelation disease, without a doubt.

Another corridor gossip. Do you know which is one of the specialties that has recovered the fastest after the pandemic? The aesthetics! It must be because people have looked in the mirror a lot during confinement. Calviño and Montero can now take good note, because a large part of the families’ savings during confinement will go to rhinoplasty. At the time.

They have remembered Montero here more than once and more than two. It is already known that all governments are in a coalition between the Treasury and the rest of the Executive, so it is not surprising that Margarita Alfonsel and Humberto Arnés insisted on the need to bet on the Health sector … And that we stop “talking about health spending to refer to investment”, a reflection in which doctors also agree and pharmacists.

A very similar request is the one that the president of Clece had, Christopher Valderas, which repeatedly demanded that investment in the elderly rise to 1.7% of GDP as occurs within the OECD.

The doctors with Tomás Cobo, president of the Colegio Medica Organization, have come with the hatchet and warning that they are “fed up.” A claim that is extended to other professionals in the sector. And not only from work, but also from their working conditions. So, to a large extent, Montero and the rest of the Treasury councilors have also been floating in the environment..

Be careful, because in the next few years things will get complicated because a good part of our toilets will have to retire, so we will have to pay more and better to those who come. If we add to this the awareness about health that we Spaniards are gradually acquiring, anticipates an increase in premiums on the insurance we pay.

“Compared to quality they are cheap, and if compared to the rest of Europe they are very cheap,” he exclaimed. Enrique de Porres, CEO of Asisa while his colleagues in the sector nodded. A table where I was also Iñaki Peralta, the CEO of Sanitas, who has been in office for one year and who has passed his first speech at the Health Observatory with flying colors.

The symposium (something historic according to the attendees: never had so many health professionals met in so few days … and even less respecting the security measures of the Covid) has also served for the reunion of many old colleagues. The scientists looked at each other remembering ‘calls’ and teleconferences, missing the congresses. Something similar has happened between the comrades of the sanitary industry

In fact, in the corridor there were those who spoke about the ‘rags’ of each other. Speaking in silver: sanitary ‘pret a porter’ whispers. By the way, it has been Raquel Yotti the one that has aroused the most admiration with her model, which can be seen in the photo below. 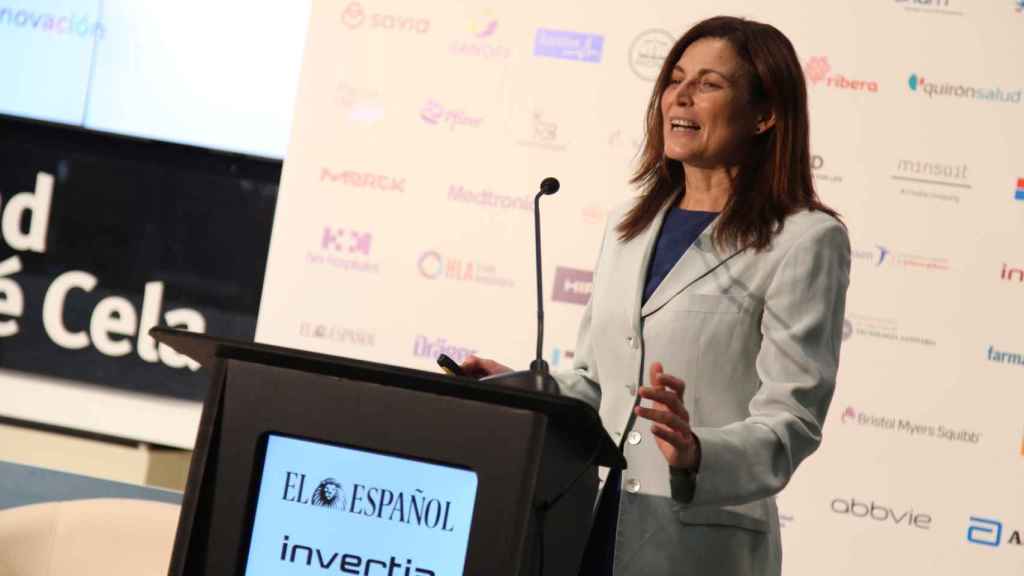 Raquel Yotti, Secretary General for Science, in her speech at the Health Observatory.

There are three more days of ‘catwalk’ in Madrid. Raquel Yotti has left the flag high. Let’s see if the rest of the guests can overcome it. We already warned that they will have it easier. The ‘look’ of the gentlemen is the pre-pandemic: blue or gray suit, shirt and tie, although the hanger of each one plays an essential role.