We said four months ago that some poorly advanced elections by the PP, in Castilla y León, sentenced the electoral expectations (and the political career) of the then leader of the party. We say today that certain early elections for the interests of the PP, In Andalucia, may have boosted the choices of the current opposition leader. The historic absolute majority of Juanma Moreno has given Alberto Núñez Feijóo a strong boost ahead of the general elections, for which, in principle, there is still more than a year left.

The first poll prepared after the Andalusian elections last Sunday extends the advantage of the PP over the PSOE to 7.6 points. The trend on the national electoral board is traced to what happened in Andalusia: the growth of Feijóo stops the escalation of Vox in its tracks, erases Ciudadanos from the map and collapses the PSOE.

According to the Political Barometer of Spain of the Gabinet d’Estudis Socials i Opinió Pública (GESOP) for the newspapers of the Prensa Ibérica group, carried out in the three days after the Andalusian elections, the PP could reach 140-144 seats (Today he is 89) and, yes, he would still need Vox’s extreme right to reach Moncloa.

But he would have a less emboldened Santiago Abascal, because if he still improved his current record two months ago, now he would be well below said mark, with 37-39 deputies (today he has 52). The ultras have fallen three points and 17 seats since April, and five points and 30 seats since February. In any case, PP and Vox add an absolute majority at any of the forks. Cs, for the second time in the GESOP barometers, would disappear from the Congress of Deputies.

Since he assumed the leadership of the PP, two months ago, Feijóo has risen three points and twenty seats, and since Pablo Casado ceded the helm of the party, four months ago, the popular ones have grown 11 points and 55 deputies. Today they would get 31.5% of the votes, which means that since April, the date of the previous poll, Feijóo has increased the distance with respect to the Prime Minister, Pedro Sánchez, by six points.

This bite of the PP to the political board is based on four parallel vote transfers: Feijóo absorbs 56.3% of the Cs voters, 23.6% of the Vox electorate, 13.8% of the PSOE voters and 19.8% of those who abstained in the last general elections. The percentage of socialist voters in 2019 who would now choose the PP ballot has doubled in just two months. While vote loyalty to the PP has risen eight points and is close to 80%, that of Vox has fallen 11 points and remains at 62%. That of Cs remains stagnant at 11%.

The improvement in the estimated vote of the PP coincides with a notable increase in the perception that this formation would win the general elections if they were held today. This is what two thirds of those interviewed believe (65.5%), 25 points more than in April and 30 points more than in February. Feijóo is the highest rated politician and the only one who approves (5.1), although it has lost a tenth in the last two months, and the one that obtains a better score among its own voters. He also leads the preferences as Prime Minister: 25.7% would prefer him compared to 16.7% who would opt for Sánchez. More than 70% of PP voters prefer Feijóo, while less than 40% of socialist voters opt for their own leader. 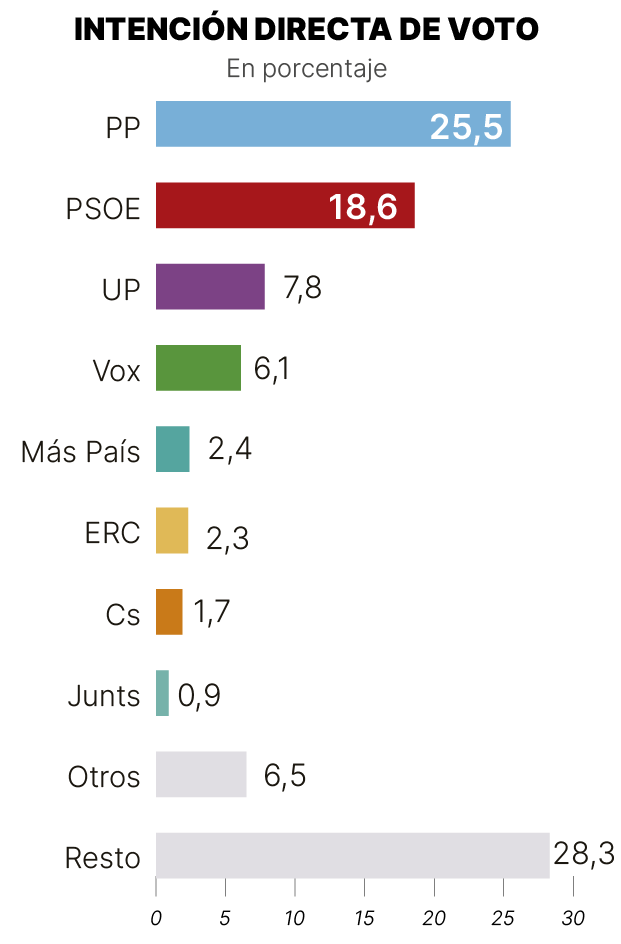 And it is that the ‘Andalusia effect’ has the reverse of the coin on the left. After the socialist blow in which for decades he was his most faithful granary of votes, Sánchez would see his electoral expectations sink compared to just two months ago, when the advantage that Feijóo had was only 1.5 points. Now it is 7.6 points and the PSOE could fall below the psychological threshold of 100 deputies. It would achieve 23.9% of the votes and 93-96 seats (now it has 120), three points and 14 deputies less than in April.

Some data that would justify the nerves in the PSOE are the growing voter flight to the PP, the recovery of just 7.4% of the voters who migrated to United We Can and the fact that it only captures 2.5% of the voters that Ciudadanos loses outright. In addition, Sánchez has worsened his score as leader, falling three tenths, to 3.9, which places him as the least valued leader of the left, behind Yolanda Díaz (4.7) and Íñigo Errejón (4). The electorate of the PSOE gives a better score to the second vice-president of the Government than to the president himself.

After the fiasco in the Andalusian elections, only 15.6% of Spaniards believe that the PSOE could win the general elections, a percentage 19 points lower than that of April and 23 points lower than that of February. Only one in four socialist voters trust Sánchez’s victory a year and a half away, in principle, from the appointment with the polls. And only four out of 10 PSOE voters prefer Sánchez as president, almost 18 points less than two months ago. 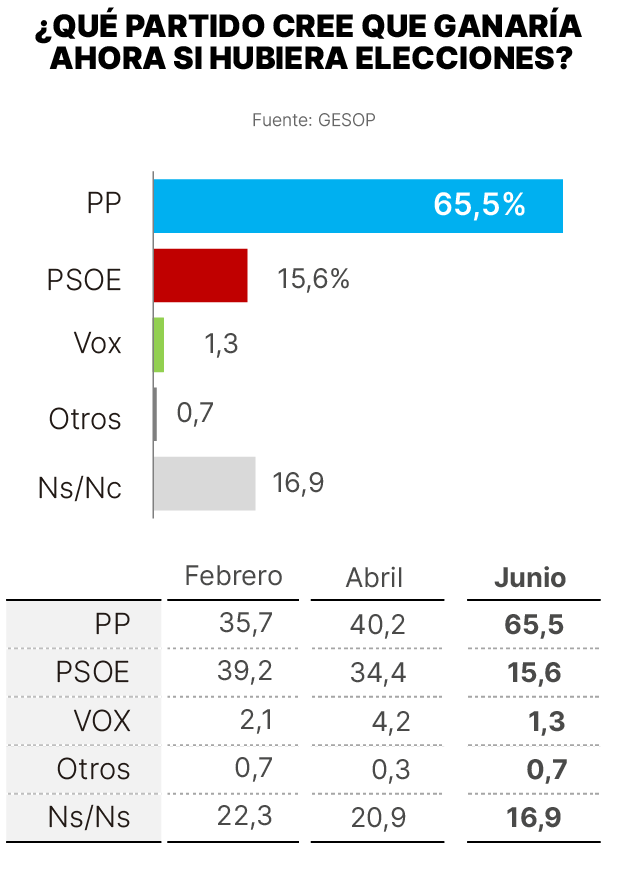 There would be less and less room, therefore, to repeat a leftist government. Despite the disaster in Andalusia and with the first bars of Sumar, the embryo of Yolanda Díaz’s future electoral platform, United We Can take oxygen in this survey and would obtain 29-32 seats (today it has 35), four more than in April. The sum of the current members of the Executive would move in the 122-128 deputies, when now it is 155 parliamentarians.

-Population: Adults with the right to vote.

-Type of sampling: Proportional by autonomous communities and municipality size. -Selection of the person to be interviewed according to crossed quotas of sex and age.