The Saskatoon city council voted against imposing its own meeting limits to stop the spread of COVID-19, after the Saskatchewan government failed to do so.

In a special session of the city council on Friday, many councilors said they did not believe the city had the legal authority to enact the measures.

All but one councilors voted against it, stopping it on the second reading.

Several also criticized the provincial government for failing to take further steps to protect Saskatchewan residents from the pandemic.

“The model and clear advice from medical health officials is that we risk extending this crisis for more months without more decisive action,” said Mayor Charlie Clark, saying he was disappointed in the Scott Moe administration for do not impose collection restrictions.

Clark said the measure is necessary, but announced that he would not vote on it, as Government Relations Minister Don McMorris told him the provincial government would not support the measure.

Coun. Troy Davies, who is also a paramedic, said he knew the situation was bad, but that it was not for cities to impose health measures.

“Municipal policy should be limited to: ‘We’re running the city, making sure its trash is collected …’, we’re about to include a city budget, and those are the things we should be focusing on. ‘ ”He said, speaking before the meeting.

Coun. David Kirton said he did not vote in favor of the measure for the same reason, though he referred to Moe’s refusal to implement additional restrictions as “an astonishing lack of provincial leadership.”

Ward 2’s Hilary Gough, the only supporter, said the city should do something.

“There are no other provinces, however, where the COVID situation has been so severe with so few restrictions, as to leave municipalities in such a tight corner,” he said.

“Our health care system is far from ready to take care of us.”

Emergency physician James Stempien, prior to the meeting, said he expected the city, or any government, to impose assembly limits.

“The last two shifts, I think I saw more than half of my patients in the waiting room,” he said, telling Global News that some patients spend two or three days waiting for a bed.

He said the overload prevents healthcare workers from providing the level of care they would like to administer.

“I have elderly patients who are in pain and are sitting in a chair in the waiting room because there is nowhere else to go, because the emergency department (is) full of admitted patients because upstairs is full of patients, many of them who are not vaccinated with COVID.“

He said he hopes the provincial government will enact the guidelines that the province’s medical health officials recommended on October 21.

The city’s director of emergency management told the council that the number of new cases is dropping, but so is testing.

In any case, Pamela Goulden-McLeod said the numbers weren’t dwindling to the point of making a difference for the city’s hospitals.

He said case rates are stabilizing and, citing the University of Saskatchewan model, said he expects “the numbers to remain high over the next few months.”

“This will translate into more hospitalizations, ICU admissions and deaths.”

The council voted to ask the province to provide clarity on what a city can do to deal with COVID-19. It also voted to instruct the administration to report on options on how to better educate the city on the severity of the pandemic and how to better communicate the Saskatchewan Health Authority model. 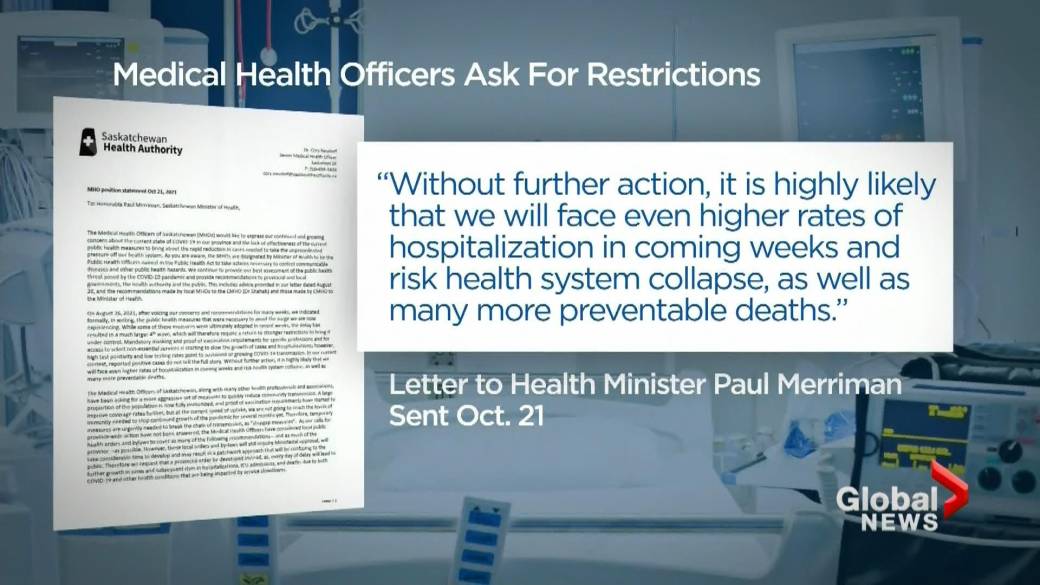