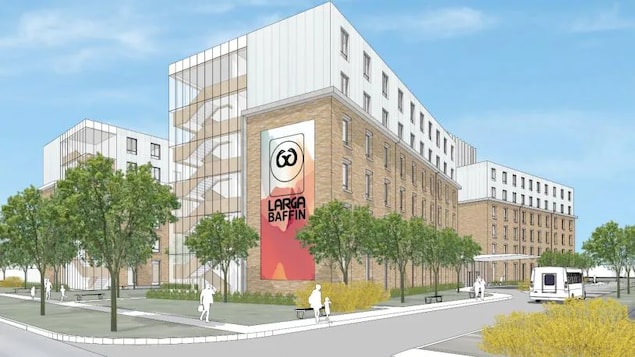 The project aims to provide new premises for Larga Baffin, a shelter for Inuit who travel to Ottawa for medical appointments requiring short or long-term stays. The new building would be located on Hunt Club Road in the southeast of the city.

The current premises, located on Richmond Road, are no longer sufficient to meet demand, to the point where residents are sent to the hotel.

With the approach of a session during which the city’s planning committee must decide, in particular, on the possibility of increasing the height of the building, the inhabitants of the surrounding area who have spoken about the new project seem divided.

Of the approximately 350 comments received, around 100 were in favor of the project, while 250 were against it. However, City employees recommend moving forward.

Among the reasons cited by opponents are major concerns related to a possible increase in crime and drug use, as well as the effect of the arrival of the shelter on the value of neighboring properties.

Some residents believe the residence only serves people who are not from Ottawa and therefore has no direct benefit to the communityis it also written in the report.

We are proud to welcome this kind of residence in our citybut you have to to make sure that [le projet est] compatible with the neighborhood in which he settles and that the concerns of the neighborhood find an answerexplains the local councilor, Diane Deans.

The City of Ottawa’s planning committee must decide on the latest version of the project at a meeting scheduled for June 23.

The impact on families

Among the Nunavummiut who have benefited from Larga Baffin’s services is the mother of Katherine Takpannie.

The lady, who is now hospitalized in the capital, resided in Larga Baffin while undergoing knee replacement surgeries and treatment for a brain tumour.

Katherine Takpannie, an artist living in Ottawa, laments the tenor of the debate about the new residency project. There were a lot of inappropriate and racist commentsshe points out.

According to her, the mentality of not in my yard is just another barrier to preventing Inuit from obtaining adequate health care.

Comments related to Larga Baffin’s proposal also had the effect of a cold shower on the pastor of the residence, Manitok Thompson.

When she heard about the project, she allowed herself to dream of a place where mothers could come with their children, where there would be a playground, a library and a sewing room, for example.

She is, however, shocked by some of the comments heard, which she describes as racist remarks old.

” Our goal is not to make people uncomfortable, we are here because we are hurting. »

We try to minimize the impact of traffic and ensure there is a buffer zone between [le nouvel immeuble] and residential areasexplains Bill McCurdy, of the firm Creva Groupwhich manages the project on behalf of Larga Baffin.

When they arrive in Ottawa, Nunavummiut are taken to Larga Baffin, who takes care of taking them to their appointments.

According to Bill McCurdy, this traffic will be less than that currently generated by the warehouses and businesses that occupy the land where the new building is planned.

As for the risk of residents smoking on the sidewalks, he says the question arose when Larga Baffin moved into his current building, but the creation of a designated smoking area on the property solved the problem. .

According to the plans submitted to the City, the planned building would offer 220 rooms that could accommodate up to 350 Nunavummiut. It would also have a kitchen, community spaces and landscaped grounds.

If the zoning changes are approved, construction should be completed within three to five years.

With information from Sara Frizzell