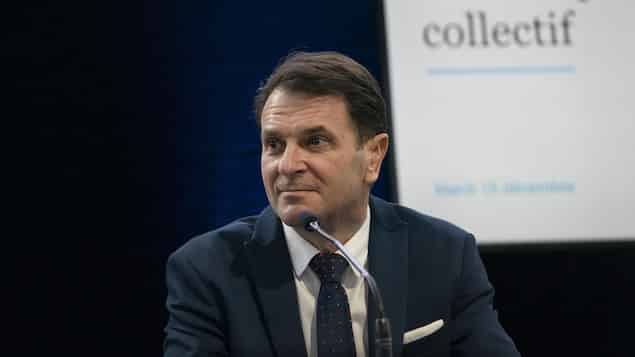 On Monday, the mayor of Quebec Bruno Marchand believed that the Legault government had the obligation to demonstrate to citizens that the third link meets a real need in terms of mobility.

To do this, he demands that a proper opportunity study be published. A spokesperson for the Ministry of Transport confirms, by e-mail, that the opportunity study is still in progress. It will be made public as soon as it is completed..

Although the government insists on making a distinction between a study and one opportunity filethe situation did not prevent the minister from being attacked on the lack of information around the project by the PQ Pascal Bérubé during the study of the credits, Tuesday.

He doesn’t have an opportunity file, Mr. President. We used section 32, which takes us directly to the business case. There is no opportunity filereplied Minister Bonnardel.

When he came to power in 2018, the CAQFuture Quebec Coalition chose to move the third link project directly to the planning stage, without completing the opportunity study undertaken by the previous government.

No, not that I know ofreplied the minister again.

No studies before the elections

Minister Bonnardel was also questioned about the unveiling of studies that support the government’s choices for the third link.

We understood that we will not have any data between now and the election campaigndropped Liberal André Fortin, blaming the MTQQuebec Ministry of Transport to have unveiled a new version without even justifying the changes.

André Fortin also criticizes the postponement of the deadline with the new version. The twin-tube project should see the light of day in 2032.

We went back to the drawing board. We worked again with the former municipal administration to review the backbone of the Capital’s express network, which is the tramway. These were long negotiations. All the work to be able to respond to the entire outskirts of Quebec, to respond to Guillaume Couture, the 116, it’s a long-term job and which made it possible to submit this updatedefends the minister.

The Minister of Transport was bombarded with questions by the opposition on the potential consequences of the 3rd link on urban sprawl. François Bonnardel refuses to say that the new tunnel between Quebec and Lévis will cause urban sprawl, speaking instead land occupation.

You know, the discourse of urban sprawl, a few years ago, when I arrived, we were talking about land occupation, replied the minister. According to Mr. Bonnardel, the current trend in urban planning and architecture is towards densification rather than urban sprawl.We see it on Highway 30, we see it on Guillaume Couture [à Lévis]. According to him, the development will rather take place on the outskirts of public transport routes.

The Minister reiterated that the third link would not lead to development on agricultural land since it there are regulations to protect agricultural land. Nobody in this government said we were going to bulldoze the farmland overnight.

The third link will instead provide an opportunity for certain municipalities to develop, without necessarily leading to urban sprawl.