Some old bicycles are getting a new lease on life thanks to a group of Calgary seniors.

Based out of the Greater Forest Lawn +55 Centre, members of the Bike Shed are rescuing unused, or discarded bicycles, then fixing them up to be donated to Calgary schools. The Bike Shed’s facilitator, Merv Graham said most of the bikes they get don’t need much work, but they ensure all of them are in safe street-worthy condition before shipping them off.

“If they have a good bike they can ride, and it’s safe – with the front reflector, a bell, and back reflector we’re happy.”

About half the cycles the Bike Shed take in to repair are rescued from city dumps, where they have a permit to salvage them.

“They were excited for us to be there because they know that we’re giving the bikes away for free.” said Graham.

Bikes that cannot be restored are stripped for parts. 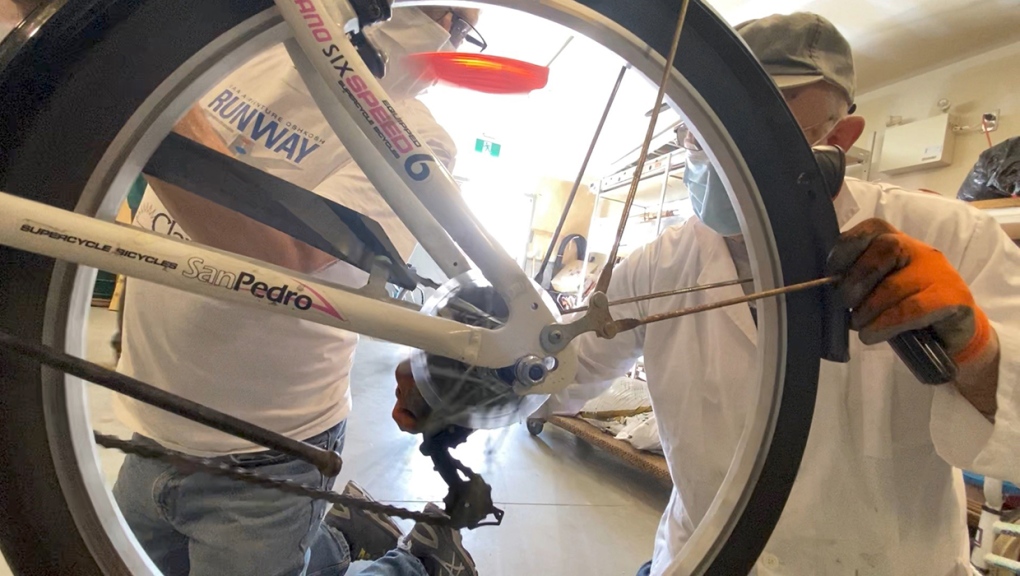 Last year the Bike Shed sent about 40 Bikes to YYC Kids Ride. This year the group has teamed up with Youth En Route which is building fleets of bicycles at Calgary school

TEAMING UP WITH YOUTH EN ROUTE

Last year the Bike Shed sent about 40 Bikes to YYC Kids Ride. This year the group has teamed up with Youth En Route which is building fleets of bicycles at Calgary schools. About half the bikes in 2022 have gone to Bishop O’Byrne High School, where they are used in a leadership program which sees high school students riding to elementary schools and mentoring younger students about bike safety.

The other half have been sent to Lester B Pearson High School, where Youth En Route CEO Laura Shutiak said they will be used to build a school bike fleet.

“We’ve helped them get bikes, so that they can use them in phys-ed class. And so they’re using them with all ages, grade 10, 11 and 12. They used them all fall, and again this spring,” said Shutiak.

“In the winter, they’re learning some basic bike maintenance.”

Teachers at the school said without the school-based bike fleet, some students might never learn how to ride one.

“We even have kids that maybe not have ridden a bike before at all, and so that’s a good skill to have,” said Mike Witt.

“I think that’s kind of probably what’s holding a lot of kids back in terms of doing it.”

Youth En Route surveyed students at Lester B Pearson High School and found a large proportion did not have access to a bicycle in their homes.

“Only 55 per cent of students have bikes. Another 10 per cent tell us they have access to a bike but not every day. So that’s a huge gap,” said Shutiak

“At Forest Lawn High School 11 per cent of students tell us they have never been on a bike.”

Tuesday morning a new load of a half dozen bikes arrived at the Bike Shed. The next school to receive them will be Forest Lawn High School.