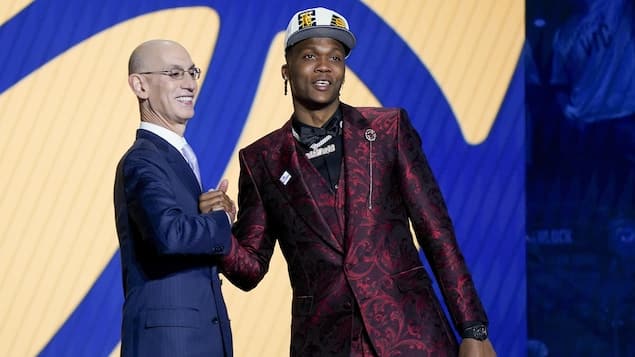 Mathurin thus became the first player born in Quebec to be drafted in the first round in 37 years. Bill Wennington, 16th pick of the Dallas Mavericks in 1985, preceded him.

The new member of the Pacers is also the representative of the Belle Province selected earlier in the history of the auction of the NBA.

In an interview with RDS, the main interested party confided after his selection that a lot of emotions walked through it when he heard his name being spoken by Commissioner Adam Silver.

It’s always been my dream to play in the NBA and I know my brother, who is in heaven right now, was with me.he said.

Mathurin’s older brother, Dominique, died in a bicycle accident when he was 15. Bennedict was 12. It was his dream to play in the NBAhe said in an interview.

The native of Montreal North did not experience the conventional route to the NBA. He joined the NBA academy in Latin America, Mexico, before joining the University of Arizona Wildcats program in the NCAA. He shone there for two seasons. In 2022, he was voted MVP of the PAC-12 association, one of the most successful in American university sport.

Bennedict Mathurin is an energetic crowd-favorite player in Arizona.

It is truly an honor to be the first lottery pick [choisi parmi les 14 premiers, NDLR] from Montreal. It’s really something big, but also for the young people of Montreal Northmentioned Mathurin.

In Indiana, Mathurin will line up alongside talented players such as Tyrese Haliburton and Myles Turner. He will also evolve under the orders of a renowned trainer, Rick Carlisle.

The Pacers, in general, are a good team, he added. Reggie Miller is one of my favorite players of all time. Tyrese [Haliburton] and Chris Duarte, they’re players I’m really looking forward to playing with too.

Mathurin, who met the Pacers in anticipation of the draft, also indicated that he had greatly appreciated his experience with the Indiana organization.

They were frank with me. They didn’t tell me what I wanted to hear, but the things I needed to work on and that they were going to help me reach my full potential.

” If you do what you have to do, anything is possible. You should never let someone tell you that you can’t do something. You also have to always believe in yourself because there is never anyone who can stop you but yourself. »

Duke University’s Paolo Banchero was the first overall pick in the draft, a catch for the Orlando Magic.

Another Canadian, Shaedon Sharpe of London, Ont., was the Portland Trail Blazers’ 7th overall pick. For the first time since 2014, two Canadians were chosen in the top 10.

Ontarians Andrew Nembhard of Aurora and Caleb Houstan of Mississauga, the only other Canadians in the running, were drafted 31e and 32e rank, by the Indiana Pacers and Orlando Magic respectively.

Koloko, the choice of the Raptors

A teammate of Bennedict Mathurin with the University of Arizona Wildcats, center Christian Koloko was drafted by the Toronto Raptors in the second round, 33e in total.

Koloko, a native of Douala in Cameroon like Pascal Siakam, was named the most outstanding defensive player of the last season in the PAC-12 association. He also set a team mark in Arizona with 102 blocks.

He is very, very enthusiastic to be with us. Like, really, really excited! head coach Nick Nurse said at the Raptors’ training facility after Koloko was selected.

The Cameroonian certainly stands out for his size, he who is 216 cm (7 ft 1) tall and weighs 230 pounds (104 kg). He’s the type of player the Raptors haven’t had since the departures of Serge Ibaka and Marc Gasol in 2020.

The Raptors had no other choice, having traded their first-round pick to the Spurs from San Antonio at the trade deadline.