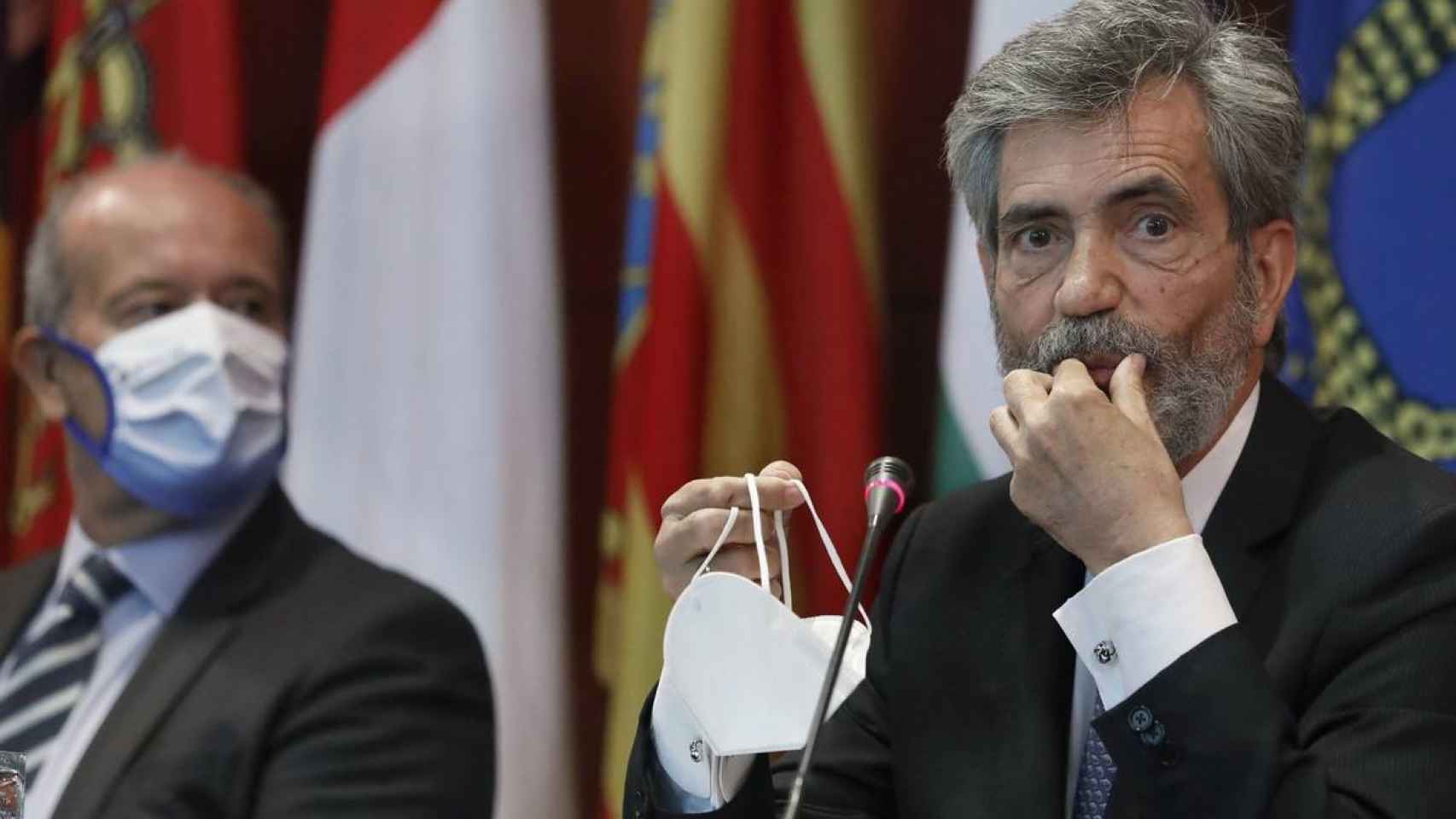 The lack of renewal of constitutional bodies, I wrote a year ago in this newspaper, is an example of what in American doctrine is called a tough constitutional game. A year later, we still do not have the Chambers renew those bodies. It is no longer a question of hard play: simply one of the essential players has withdrawn from the field until the rules of the game are changed in the election of the General Council of the Judiciary. And without giving further explanations, incidentally neither the Constitutional Court, nor the Ombudsman, nor the Court of Accounts are renewed. The system has simply been blocked like this.

I think that the leadership of the Popular Party is not very aware of the history that its own party has written on this issue. Perhaps reviewing in a few lines the path, not always straight, that has been followed in the construction of the Council will allow us all to better understand what is happening and, above all, allow the first opposition party to find solutions that are coherent with what is happening. their leaders have done so far, from Manuel Fraga even the presidents Jose Maria Aznar and Mariano Rajoy.

Let’s start at the beginning, which should always be the Constitution. In the constitutional debate on the Council, especially when discussing the current article 112.3, it was rejected that the 12 members of judicial extraction were “proposed and on behalf” of the judges themselves. This was what was contained in the draft of the Presentation. It was more difficult to agree on the number and proportion of the members that would make up the Council. Faced with the initial drafting of the constitutional draft that envisaged a Council of 15 members (8 of judicial extraction and 5 of parliamentary extraction), the PNV asked that 20 of them be elected by Congress and the other 10 by the judges and magistrates. The PSOE inverted the proportions and proposed that the Congress elect 12 and the judges and magistrates 8 members.

The agreement was closed in Committee approving the structure of the model that appears in the Constitution (20 members, 12 of judicial extraction and 8 of parliamentary extraction), with two significant changes with respect to the Report of the Report: the precept was eliminated, which to Sometimes it is forgotten that the 12 judicial members were elected “on the proposal and on behalf” of the judges and magistrates and the regulation of the electoral college was referred to what the corresponding organic law provided.

Organic Law 1/1980 of January 10, of the General Council of the Judiciary, regulated the procedure for the election of the first Council. In this law, voted among others by the two major parties of the parliamentary arch, the PSOE, seeking consensus, yielded in its proposals and accepted that it was the judges and magistrates who chose the 12 members of judicial extraction. This was, as you can well imagine, a not so easy assignment from the Socialist Group; and it was done with the hope that the outcome of the elections for the judges would reflect pluralism, if not of society, then at least that of the judiciary itself. It was not like that and in the first elections The Professional Association of the Magistracy, with a clear conservative profile, swept and took over the 12 positions summoned: the judges and magistrates did not judge it necessary for the new Council to reflect the existing plurality in the race.

The Council was constituted again on October 23, 1980 and, very soon, the UCD Government itself suffered the first clashes of a Council that became the corporate government of the judges. The arrival of the Socialist Party to the government, with its own legislative policies, increased tensions.

The left, from the moment it was constituted, had always defended the greatest democratic legitimation of the Council’s parliamentary election model. But the immediate trigger for the change on this point was the attitude of increasing confrontation of that Council dominated by the Professional Association with the legislative policies of the Socialist Government, as well as the proximity of the appointment by the Council of magistrates of the Supreme Court, of the Audiences and of the own Constitutional Court.

With that militant Council, it was not possible, it was thought, for the judicial body to open up in its new appointments to those minority judicial sectors in the race, but more committed to the fight for democracy. It was, as he said Gregorio Peces-Barba, “The clumsiness and the claim of absolute domination of sectors of the magistracy that did not want to recognize the right to representation of minorities” which led to the change of the model.

And so it was that the Organic Law of the Judicial Power 6/1985, of July 1, modified the form of election of the Council, attributing to the Congress and the Senate the election of the 12 judicial members. This law was appealed by the PP; but the Constitutional Court fully endorsed its constitutionality.

For thirty-six years (from 1985 to the 2013 reform) the model established in 1985 has been respected and applied both with socialist majorities and with majorities of the Popular Party. But it is quite true that an important judicial sector never accepted this formula and continued to dream of a return to the formula of the first Council. Partially echoing these aspirations in 2013, the Rajoy Government imposed its majority to carry out a reform that, if it did not modify the background of the model, did introduce important nuances that in the debate these days are usually overlooked.

The Organic Law 4/2013, of June 28, of the Judicial Power, is extremely revealing: an election system has been designed, says its Statement of Motives, that guarantee the maximum possibility of participation in the process of all members of the judicial career and at the same time that “it attributes to the Congress and the Senate, as representatives of popular sovereignty, the responsibility for the appointment of said members.” Seeking, therefore, these two objectives, the Law presented by the Government of Rajoy established that the judges themselves and the associations would present the candidacies and that the Supreme Court, through an Electoral Board, would select those judges and magistrates who meet the requirements of seniority, merit and ability to form part, where appropriate, of the Board. In the end, without saying so, that formula of the constitutional draft, eliminated in 1978 and which attributed to judges and magistrates the ability to make the proposal, was being recovered.

The panel thus formed by the Supreme Electoral Board is binding on the Chambers. The Congress and the Senate can only elect the 12 judicial members from those previously selected by the Supreme Court magistrates who make up the Electoral Board. It is this Board that guarantees that all its candidates, regardless of their legitimate ideologies, have the merits required to be part of the Council.

The Rajoy government bill was rejected by most of the parliamentary groups. However, it was approved with the votes of the Popular Group as revealed by the result of the vote: 179 votes in favor of the final text, 140 against and 1 abstention. The Socialist Group, despite rejecting its amendments and voting against the law, ended up accepting the change by way of fact by negotiating the election of this Council with this law.

The Constitution is not only defended by fighting sedition

With the expiration of the mandate of the current Council at five years, the reformed system has been blocked. The PP, alleging different reasons depending on the time and convenience, has refused to negotiate the renewal, retracts the legislative reform promoted by the Government of Mariano Rajoy, denies the model imposed by the majority of the Popular Group, and previously demands to change the law, its own law, as a condition to unblock the renewal of the Council. Curiously, one of the objectives of that Law was “the elimination of blocking situations”, as regulated in its article 570.2.

The current Council model, with the important modifications introduced unilaterally by the popular party in the X Legislature, has governed the election of the Council for 36 years with both socialist and popular majorities. The model is perfectly constitutional (STC 108/1986, of June 29) and constitutes a point of balance between the first corporate Council and the attempt to reduce, as proposed a year ago, the majority in the Chambers.

Compliance with the law does not allow for excuses or conditions. Nobody, least of all the legislators themselves, are above the law. They are the first to set an example by complying with them, on pain of losing credibility when in the future they demand respect for the law from the Government. The law can be changed and I think it would indeed be convenient to change it to break the model’s drift towards lotization, or distribution of posts according to the parliamentary force itself. It was the warning that the Constitutional Court issued already in 1986. A warning that is valid both for political parties and, incidentally, for judicial associations in view of what happened in 1980.

All the leaders who have ruled this country (since Adolfo Suarez to Mariano Rajoy, passing through Felipe Gonzalez, José María Aznar or Jose Luis Rodriguez Zapatero) have negotiated, with greater or lesser diligence, the renewal of the constitutional bodies. All of them have practiced self-containment, avoiding putting their powers veto.

Unfortunately there have been regrettable delays on more than one occasion. But none of them have blocked the normal functioning of the institutions, which is the first obligation of any leader who aspires to govern. Our democracy has known in these forty-two years moments of hard play, but we have never seen a party of the constitutional arc go out of play.

We must return to the negotiation because what we have to do now is to comply with the law and proceed to the immediate election of the members of the Council, the Constitutional Court, the Ombudsman and the Court of Accounts. It is required by the dignity of the law and is required by care and commitment to the Constitution, which is not only defended by fighting sedition but also daily by making the normal functioning of the institutions possible.

*** Virgilio Zapatero is emeritus professor, former rector of the University of Alcalá and former minister of Relations with the Courts.