VICTORIA Singer-songwriter Logan Staats was performing at the Wet’suwet’en blockade in northern British Columbia in November when a swarm of RCMP officers grabbed his hair, slammed his face on the ground, jumped on top of him and arrested him, he said .

The Juno-nominated Mohawk artist from Brantford, Ont., who is to perform May 7 in the Toronto Beyond Our Roots Festival, has been juggling his music with protesting the Coastal GasLink natural gas pipeline stretching across the Wet’suwet’en First Nation’s traditional lands.

Dark hair cascading down his back, the 33-year-old lowered his gaze as he described the trauma of his arrest. He felt dazed, unable to breathe and was bleeding uncontrollably from his ear, he said.

“I was simply there to protect the land… I was singing.”

After two nights in jail, Staats opened for Oscar-winning Canadian singer-songwriter Buffy Sainte-Marie in London, Ont. Sainte-Marie’s makeup artist struggled to conceal his bruises from her, Staats said. He hadn’t slept and it was painful to walk. But the furor at the Wet’suwet’en territory ignited a fire that infused his music from him, he said. “It was one of the best shows I’ve ever played in my life.” 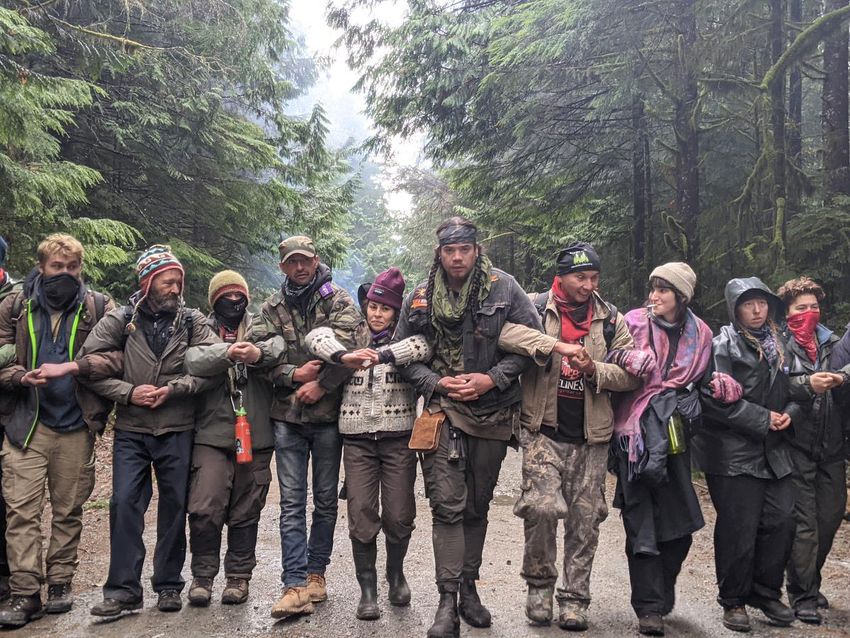 Staats feeds this fire on his upcoming album, “A Light in the Attic,” in which he connects his music, his activism and his personal healing.

Hit single “Deadman” expresses the trauma of his family being survivors of the notoriously brutal Mohawk Institute Residential School in Brantford, he said. The school’s mission to “kill the Indian in the child” devastated Staats’ kin. His grandfather told him not to tell people he was Indigenous and moved the family outside their Six Nations community. “Growing up, there was a huge disconnect for me and my culture.”

At a time when Indigenous and climate activism are taking a back seat to global security, Staats’ soulful voice is a reminder of the ongoing anguish of Canada’s Indigenous communities.

the video for “Deadman,” filmed at the site of the Mohawk residential school, bursts with “land back” protest images. The song is about the culture that was stolen from him, Staats said. “When I sing ‘Give me back my love,’ I am singing about learning to love my Indigenous culture and myself.”

The gentle urgency of “Deadman” also reflects Staats’ difficult journey back to the stage. He had a meteoric rise to fame after he won Bell Media’s musical competition show “The Launch” in 2018 and his single “The Lucky Ones” became an award-winning hit.

But being snapped up to work with music moguls at Big Machine Records — which also represented stars such as Taylor Swift — put a strain on the singer. “They wanted me to record the song over and over” to monetize it, he said. “I was in this love-hate relationship with music for a while.”

Pressure from the label, contract litigation with a former producer and deepening social anxiety pushed Staats down a dark path, he said. In 2019, I have spent six months in a recovery center to overcome cocaine and alcohol addictions.

“It dampened my confidence in my music,” he said. “It was a really, really tough chapter of my life.”

But sitting at a piano with a view of the Pacific Ocean, Staats looked confident and happy. Coming to British Columbia to help stop climate change has propelled him back to music. “A Light in the Attic” is named for the light that combining his artistic work and activism has brought him into his life, he said. “I found light in that struggle… through music and through land defence.”

Staats has been recording with six-time Juno Award winner Serena Ryder and now works with the Indigenous-owned label Red Music Rising. His next songs by him, to be released this spring, tell tales of the Indigenous and climate movements in British Columbia, he said. “I have written three songs that are some of my best… from my work on the front lines.”

Among fellow land defenders, Staats has also “found family” in British Columbia. Old-growth logging activist Grandma Losah said Staats is like a son to her. He plans to marry fellow Wet’suwet’en activist Hannah Hall on the Wet’suwet’en traditional territory, or Yintahthissummer.

Though he’s excited about touring Ontario this summer, Staats said climate change is all he can think about when he’s away from British Columbia. “How much closer are the machines to the river? How many more trees have they chopped down? It’s heartbreaking,” he said.

Staats feels a deep obligation to amplify climate change issues with his music and remain a force on the Wet’suwet’en front lines.

“It’s embodied in every note that I sing, every chord that I play.”

The Beyond Our Roots Festival takes place May 7 and 8 at Revival, 783 College St.

Katharine Lake Berz is a management consultant and writer on Vancouver Island and in Toronto.