The heinous vandalism of the Historically Orange Bridge over the Somass River in Port Alberni lasted only a few hours before it was removed by members and supporters of the Tseshaht First Nation on Saturday morning.

Photos of the vandalism showed that the Every Child Matters message that survivors of the Alberni Indian Residential School painted on the concrete barrier in front of the bridge earlier this week had been defaced, with the word “child” changed to a “derogatory name.” and racist.” Watts said.

The Tseshaht First Nation recently completed a ground-penetrating radar search of the former residential school, and on Friday, the second National Truth and Reconciliation Day, more than 1,000 people participated in a walk honoring the survivors who crossed the bridge.

“In the same night, this happens,” Watts said, describing the vandalism as “disgraceful.”

“It just shows me that we have a lot of work to do,” he added.

At the same time, Watts said the reaction to the defaced sign was immediate and “surprising.”

Some Tseshaht members noticed the vandalism while the paint was still wet and were able to remove it with soap and water, the senior counselor said.

On Saturday morning, he and others headed to the bridge to repaint the sign, a job they completed before noon.

Watts said the outpouring of support his nation has received since the vandalism has been encouraging.

“It shows that there are a lot of people who want to help our communities and support us,” he said. 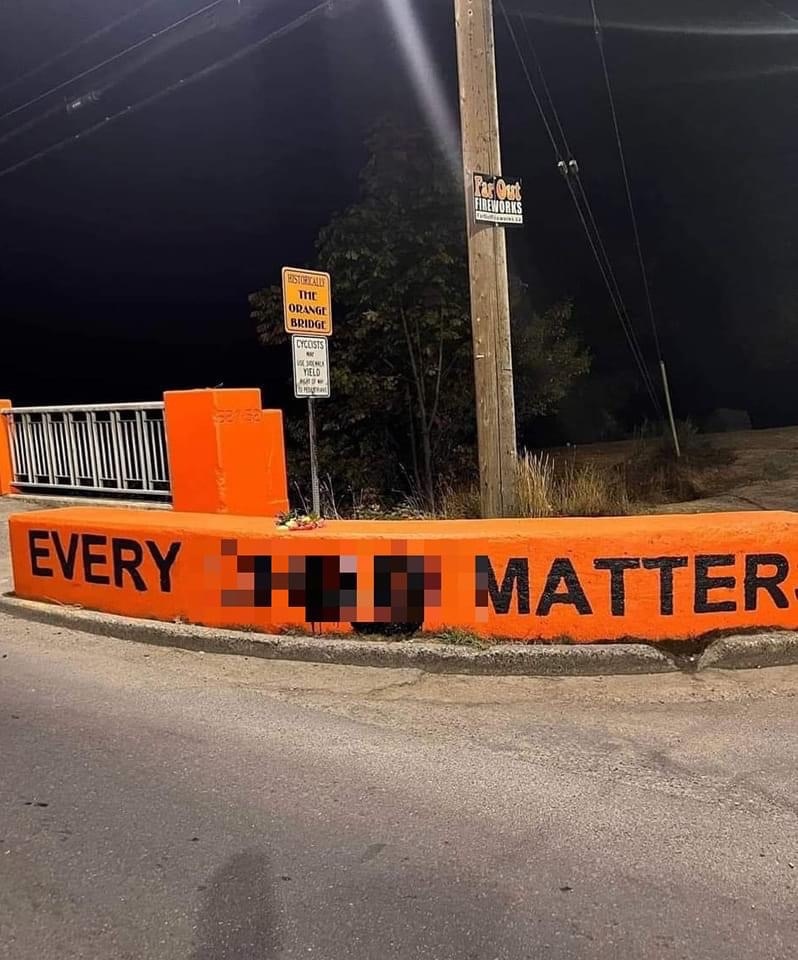 Photos of the vandalism showed that the Every Child Matters message that survivors of the Alberni Indian Residential School painted on the concrete barrier in front of the bridge earlier this week had been defaced, with the word “child” changed to a “derogatory name.” and racist.” Watts said. (Port Alberni RCMP)

The Port Alberni RCMP is investigating the vandalism and is asking anyone with dash cam video or information on who was responsible for defacing the signs to contact them.

“Senseless acts like this are unacceptable and concerning to our community, and reverse efforts toward truth and reconciliation,” Const said. Richard Johns, in a press release.

“Although this crime was not reported to our task force, officers are actively investigating any available leads.”

Watts said her first thought when she saw that the barrier had been defaced was how hurtful it could be to residential school survivors in her community.

Heading west along Highway 4, the Historically Orange Bridge crosses the Somass River and enters the Tseshaht First Nation, where the Alberni Indian Residential School once stood, just a few hundred meters away.

The bridge is a constant reminder to survivors of what happened there, to the point that some won’t cross it because it reminds them of school, according to Watts.

The recent paint job restored the color of the bridge that it was painted on in the 1980s, but also added the Every Child Matters message and the symbolic meaning that the color orange has come to represent.

In its current incarnation, the bridge is meant to honor all children who attended school, but Watts says the key to maintaining that meaning will be education.

He said reconciliation requires denouncing racist incidents like the one that occurred Friday night and educating others about what residential schools were and the damage they caused.