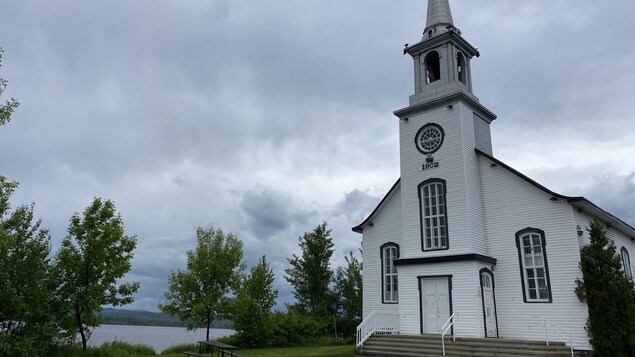 A first step in the project was taken last week when historians and an archaeologist recovered artefacts that bear witness to the village which was submerged along with its agricultural land in 1924, in order to prepare an exhibition.

Réal Bergeron had arranged to meet them in the barn that belongs to him. The building formerly housed the Marguerite-Belley Museum, which he founded and which closed its doors in 1992. The letters of the institution’s name, erased by time, still appear on the building which runs along the Chemin du Quai in the Lac-Kénogami sector, in Saguenay.

The barn contains a panoply of antiques and objects accumulated over the years by the man who is now 82 years old. In the roof of the old barn, a space is reserved for objects that tell the daily life of the inhabitants of the village of Saint-Cyriac, where his mother lived.

Display cases were set up on the upper floor of the barn, where the found objects were kept.

These objects, he found them while surveying the shores of Lake Kénogami, every spring, for more than 50 years, in search of the traces left by his ancestors.

” With the maps I had, and the information, I could find where there were small stone foundations, for example. Go dig, dig. Every spring, nature, the waters dig up things. »

Réal Bergeron found many objects from the former village of Saint-Cyriac while walking the shores of Lake Kénogami each spring.

The foundations of old buildings are even visible in the spring, when the lake level is at its lowest, he reports. Several objects were also given to him, adding up behind the display case where he carefully filed the small artifacts on displays over the years.

It is sure, for an ordinary person, that does not have a great value, the objects which are rusted, deteriorated. But it’s memories, it’s the heritage of our founders shares Réal Bergeron.

Réal Bergeron keeps a panoply of antiques in his barn that once housed the Marguerite-Belley Museum in Lac-Kénogami.

Objects used daily in the houses by the inhabitants for cooking, tools or pieces of bottles are found in the collection which was almost entirely recovered by archaeologist Érik Langevin and historian Alexandre Dubé, both professors at the University of Quebec at Chicoutimi (UQAC).

The inhabitants left these objects behind when they had to leave the village before it was flooded.

Archaeologist Érik Langevin and historian Alexandre Dubé, both professors at the University of Quebec at Chicoutimi, recovered the artifacts last week, along with Isabel Brochu, project manager for the ROLK.

That is to say, we find small objects that were accessible enough for us to get rid of them, so that we forget them on the spot, without too many moods. But at the same time, which offer a rather touching element, I must say, of this daily life he adds.

Toys, for example, were found where the village school stood, he shows, opening boxes where the recovered artifacts were placed. A miniature horse, a small revolver or parts of a doll are there.

Toys were found where the old village school was.

For Réal Bergeron, telling the story of the village where part of his family lived is a legacy he leaves to future generations.

It makes me very happy that the artifacts, especially, are saved. Because there is so much work in there. It’s our memory, our heritage he shares.

Several objects that bear witness to daily life in Saint-Cyriac have been recovered.

Make it a recognized archaeological site

The artifacts recovered will be processed by the Archeology Laboratory of theUQAC. The finds made by Réal Bergeron also prompted Érik Langevin to want to make the old village an archaeological site recognized by the Ministry of Culture and Communications.

It had never been inventoriedmentions the archaeologist, who intends to file a request with the ministry. It will be an opportunity, both to make it a recognized archaeological site, but also, we will take advantage of itUQAChe adds, explaining that artifacts can be used during educational activities or research projects.

Réal Bergeron had carefully classified the objects by category.

In the fall or next spring, his team will travel to the shores of Lake Kénogami and near the Saint-Cyriac chapel, to survey the land with specialized equipment and make an inventory of the objects that are still there. .

Archaeologists will also be interested in the Aboriginal occupation of this territory. The mother of the first family to settle in what would become the village of Saint-Cyriac was of Innu origin, married to Cyriac Buckle, to whom we then owe the name of the parish.

The Mashteuiatsh History and Archeology Society will also be involved in the commemoration project.

An exhibition in the Saint-Cyriac chapel

The recovered objects will be found at the heart of a permanent exhibition presented in the Saint-Cyriac chapel. The place of worship built at the beginning of the 20e century, clearly visible on the shores of Lake Kénogami, is one of the rare witnesses of this period. The small chapel had been moved in order to be saved from the flood.

The artifacts will tell the story of the raising of Lake Kénogami, an event that remains little known.

The village of Saint-Cyriac had been submerged when the level of Lake Kénogami was raised in 1924 to make it a large hydroelectric reservoir.

The raising of Lake Kénogami is undertaken by the Quebec Waterways Commission, to support the development and growing energy needs of Julien-Édouard-Alfred Dubuc’s Compagnie de pulpe de Chicoutimi and the Kénogami pulp and paper mill. , owned by Sir William Price.

The goal of the operation: to transform Lake Kénogami into a hydroelectric reservoir and stabilize the level of its two outlets, the Rivière aux Sables and the Rivière Chicoutimi.

You should know that on both rivers there are industrial installations and which use the driving forces, either the driving forces directly by the hydraulic force, or by the production of electricity. And in both cases, we need to have a level of the rivers that is stable all year round. explains the historian, who teaches at the Cégep de Jonquière.

This map made at the time shows in yellow the areas that were flooded when the lake level was raised in 1924.

The cost of the work, to which Dubuc and Price contributed, ultimately amounted to $4 million at the time. The construction of the Portage-des-Roches and Pibrac dam, as well as the construction of dikes, will make it possible to raise the level of Lake Kénogami from 92 feet to 115 feet, can we read in an article in the historical magazine Saguenayensia published in the spring of 2006.

The inhabitants of the village, who receive compensation for their expropriation, are divided on the project. The farmers, who lose their land, are numerous to oppose it.

” In fact, it’s as if we had two types of societies that clashed: a society centered around traditional values, agriculture, community life and the modernity that comes with its industry, with its need to harness rivers, to raise water bodies, to change the environment in the name of progress and the capitalist economy. »

The exhibition that will take place in the chapel is part of a much larger project to commemorate the event in 2024.

2024 is going to be a memorable year for the village of Saint-Cyriac, which will be lifted from the waters proudly announces Sylvie Brassard, President of the ROLK.

The organization is piloting the commemoration project estimated at between $100,000 and $150,000. Saguenay and Promotion Saguenay have already donated $25,000 each to support the project, which plans to involve several cultural partners.

This is the story of the first dams in the region, it is also linked to economic development, he adds. And also, we witnessed a certain drama, these people were expropriated.

The ROLK and the members of its board of directors, who are meeting here in the chapel, are piloting the commemoration project.

An augmented reality trail will allow visitors to explore the surroundings. Artifacts could also be exhibited in different places in the sector, indicates Isabel Brochu, project manager for the ROLK.

There will be a small part [de l’exposition] in the chapel, but the digital route will be used with augmented reality images, among other things, to see where the village was before, precisely, to leave the chapel with a circuit.

The project will also contribute to highlighting the chapel, which was renovated after a mobilization of citizens in 2017 who wanted to avoid its closure.

There are many organizations that are ready to make sure that the chapel remains, it’s a way to highlight this chapel and also to bring everyone together, all the citizens underlines Aline Beaudoin, treasurer of the ROLK.

The village of Saint-Cyriac had about 850 inhabitants before being flooded.

Citizens are also called upon to contribute to the commemoration project as part of a first mobilization event.

Testimonies will be collected tomorrow, Friday during the national holiday at the Saint-Cyriac chapel, between 11 a.m. and 4 p.m.

To read and listen: