PHILADELPHIA—It has been a constant Raptors trait—something they should be very proud of—that someone rises to the occasion when things look the most bleak.

More often than not, in the absence of a player or two or three, someone pops a big game for them, does something a bit out of the ordinary, makes the extraordinary contribution that somehow gets them over the hump.

And today more than any other day in this long, confusing but entirely entertaining season, the big wonder is: Who will be this time?

On Saturday, in a season-saving Game 4 win over the Philadelphia 76ers at Scotiabank Arena, it was Thad Young. Maybe here on Monday night, as they once again try to stave off elimination in the best-of-seven playoff series, it’ll be someone else.

The possibilities are many, but someone in the raucous Wells Fargo Center will have to do the unlikely for the Raptors to extend the series to Game 6 back in Toronto on Thursday.

With Fred VanVleet obviously hobbled — he’ll be listed as questionable for Monday’s game after limping off the court with a left hip flexor strain in Game 4, and would be less than 100 per cent even if he can go — the Raptors are going to have to find another magical performance to subdue the Sixers like they did in Toronto on Saturday.

“I think when you are going to win a game like this — not unlike when they beat us — you’ve got a whole bunch of guys that chip in,” coach Nick Nurse said after the 110-102 victory. “I said that after Games 1 and 2. Every guy that hit the floor for them contributed in some way, and I pretty much think that is the case for us.”

It’ll have to be again, and if this series has proved anything it’s that nothing can be taken from one game to the next.

The Raptors were bad in Games 1 and 2 and fully deserved the losses they took. They were better in Game 3 and extended it to the dying seconds of overtime, then far better when they won Game 4 by pulling away in the fourth quarter. 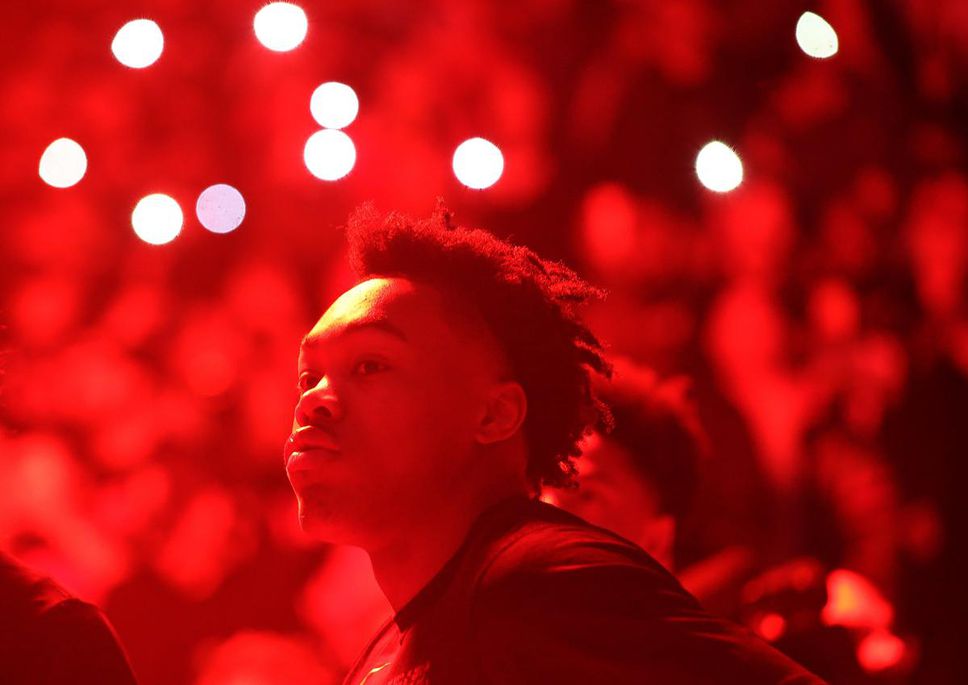 Look at the individual performances for further proof that what works one game might not work the next.

Can Anunoby get back to his Game 3 form? Can Young come up with another gem? No one knows, because Nurse’s contention that every single game takes on its own personality, requiring a different touch and different strategy, is obviously true.

“I mean, it’s not just me; it’s a whole team effort,” Young said Saturday. “We all came together and knew that it was win or go home, so (we) put our minds to get the job done. It’s all about going out there and executing and making sure that I’m always there for my teammates…. putting out that 100 per cent every single day. That’s the plan.”

The wild card is all of this could very well be Barnes, the newly minted NBA rookie of the year who returned Saturday after missing two games with a sprained ankle. He certainly wasn’t his usual explosive self in 25 minutes, but he gave the Raptors 11 rebounds, a stronger defensive presence and will likely see his ball-handling role expand regardless of VanVleet’s status.

“I think that’s a great run out for him on that (ankle) to give him some confidence going forward here,” Nurse said after Game 4.

So maybe it will be Barnes. Maybe it will be Young, again. Perhaps Anunoby. Possibly Boucher. It’s a given that the Raptors need big games out of Pascal Siakam and Gary Trent Jr., but they also need help from somewhere else. To suggest they won’t get it from someone a bit unexpected flies in the face of history.

And Barnes, the youngest player in the series at 20, seems ready.

“I feel like I was born a leader,” he said. “I was always set up to have a voice out there on the floor. I try to make my presence known (when) I step on the floor every single night, so I feel like it won’t be that hard for me to be a leader.”