Amanda Carroll was always drawn to animals more than people. A shy and quiet girl from Stratford, Ontario, discovered early on a special connection with the four-legged friends in her life. “I remember coming to the Toronto Zoo as a kid,” says Carroll. “I always thought (working there) would be the best job, but never in a million years did I think I’d get a job here.”

Much less than a million years later, after an internship at the Florida Great Ape Center, Carroll became a keeper at the Toronto Zoo.

As a generalist in the Indo-Malay pavilion of the zoo, he works with animals of different sizes and colors, including fish, birds and tigers. But the Sumatran orangutans are his specialty. “They are so smart and they keep you on your toes,” she says. “The days go by fast.”

A typical day for a zookeeper includes behavioral training. Apes, for example, need to learn to present a body part to veterinarians for medical treatment, which means turning around to show their back, offering their arm for an injection, or putting their nose in mesh to disinfect a cut. .

Zoo staff use positive reinforcement during these sessions to reward behaviors they want to encourage and steer clear of, such as aggression. Rewards often include food, but Carroll says orangutans respond to praise, too. “They react to a ‘good job’,” he says. “They are very good at understanding English. It’s amazing.”

As with human relationships, Carroll says that the bond between the caretaker and the animal requires trust. “Even just with the change, we want them to trust us that nothing bad is going to happen when (they move) to another area,” he says. “We have two teenage boys, so there are a lot of hormones in there. We need to know what dynamics are happening in our group and if one does not feel comfortable switching to the pen with another person. “

Also, as with humans, Carroll says that personalities can be “very different” from one primate to another. The Toronto Zoo is currently home to six orangutans, including Puppe, a 54-year-old female, the oldest in North America. Puppe cooperates with some caregivers more than others and makes them work hard for her trust, while another woman, Ramai, is known as a rule-follower. 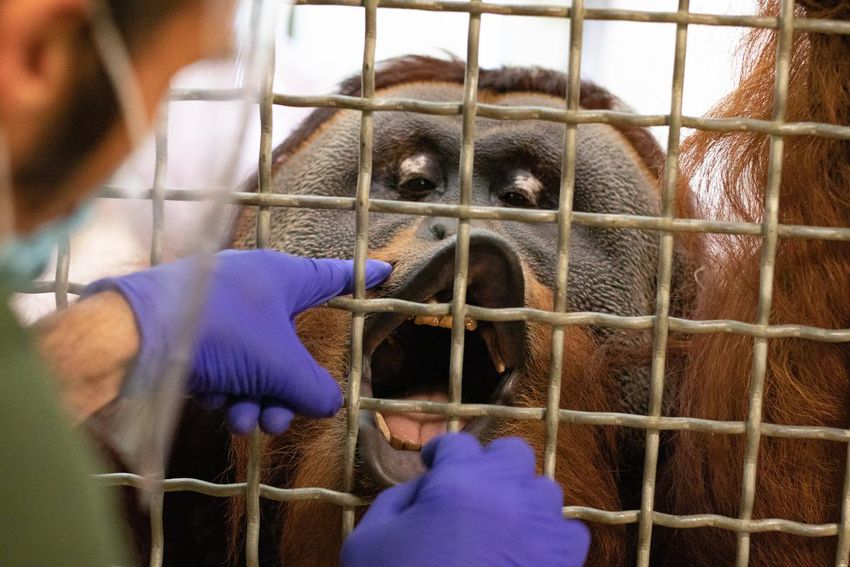 But behavioral training not only makes a keeper’s job easier, it also enables zoo orangutans to participate in studies that benefit their relatives in the wild.

Budi, Kembali and Jingga, the three teenagers from the zoo, are part of a study that tracks the growth of adult teeth in orangutans. These dental emergency data help researchers better understand the development of the animal in the wild and rehabilitation centers to better determine the age of an orphan orangutan. Behavioral training at the Toronto Zoo has prepared orangutans like Jingga for the simple task of opening their mouths so that keepers can record videos and count teeth arriving.

For his part, Kembali is learning to be especially creative. Instead of guardians requesting specific behavior, you are rewarded for creating something entirely new. “If we give him accessories, a hat or a scarf or some small toy, he will put it on his head or in his mouth or just do weird things with it,” says Carroll. “They are silly and ridiculous. It’s great to see them. “