For the first time since arriving in Edmonton, a group of Afghan refugee children left quarantine and had the opportunity to run, play and communicate with other children, after hiding for months.

A group of 170 refugees – dozens of whom are human rights workers – arrived from Calgary in Edmonton on Friday 14 January. They have been in COVID-19 quarantine ever since.

Tuesday was their first day out of quarantine and on Wednesday, many of the children were taken by bus to the soccer center in eastern Edmonton for a chance to participate in free sports.

“They were just very excited to be able to go somewhere,” said Sharon Yeo, director of immigration and settlement services at Catholic Social Services.

“They had a lot of pent-up energy and excitement that they wanted to express.”

CSS welcomed the government-backed refugees when they arrived in the city and is working with the families to support their transition to life in Canada. This includes introducing them to popular Canadian group sports. The children from five to 17 years old played soccer, basketball, soccer and hockey.

“They live under a lot of anxiety, a lot of stress, a lot of danger. “Once they arrive in Canada and they have that feeling of relief that they can start anew, the kids can have that freedom to play,” Yeo said. “Where, when they are in a refugee camp or where they are hiding in the country they are in, they do not have it.

“For these parents, it’s just something you can not attach value to having their children come here to a safe place to play for the first time in months, if not years.” 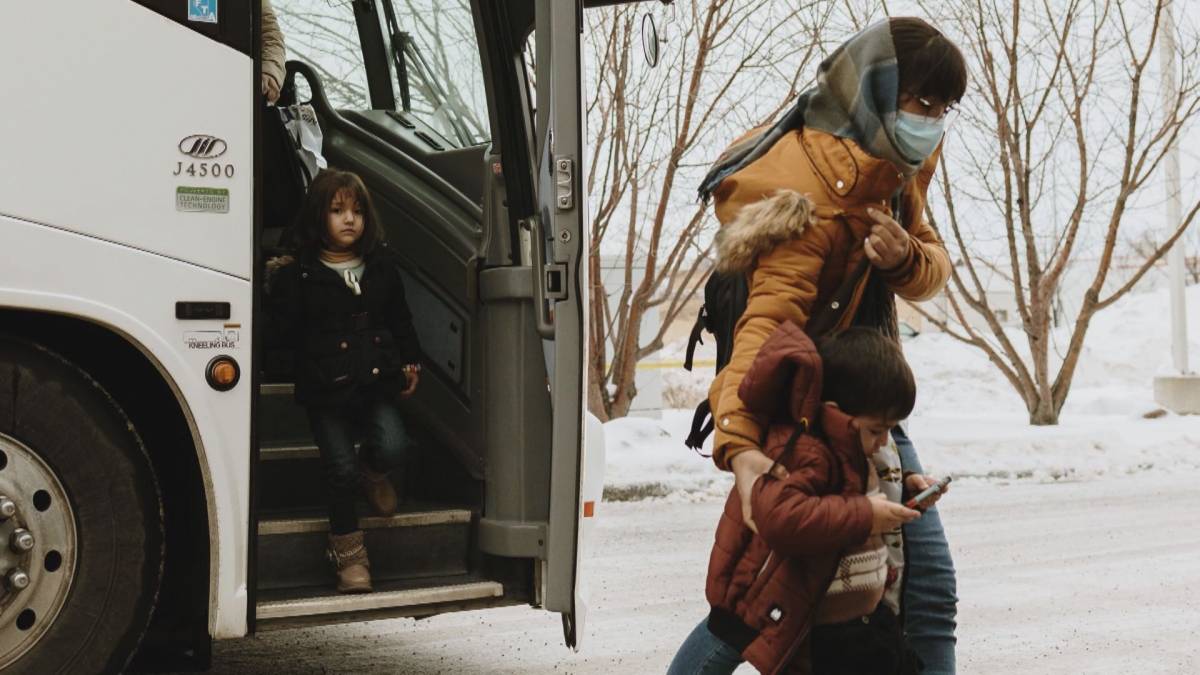 CSS has partnered with Free play for childrenwhich aims to break down barriers when it comes to access to sport.

“Between their quarantine period and transition to permanent housing, there’s a pretty big dead space where there’s not much for them to do,” says Brandon Brock, chief operating officer of Free Play For Kids.

“They are not in school yet, they do not have much structure in their lives. It is therefore a wonderful opportunity for the children to come here, play and get few benefits such as your daily physical activity. ”

Alberta man helps family escape from Afghanistan: ‘This is not for the faint of heart’

The refugees fled Afghanistan during the Taliban uprising in August 2021 and hid until earlier this month, when a flight could be booked, CSS said. About 40 percent of the group of 170 are children.

Adapting to their new lives can be challenging, but Brock said sport can be an easy icebreaker because it is a “universal language”.

“You do not have to speak each other’s languages ​​to play with each other and I think that’s why playing is such a great way to integrate children into the program,” he said. “The more people can create spaces that are safe, welcoming, supportive – where children can come to play, learn and grow – the better our future will be.”

Refugees from Afghanistan start arriving in Edmonton and Calgary

The time is also beneficial for the adults. While the children play, CSS settlement workers sit down with the parents to complete important settlement tasks, including setting up bank accounts, securing housing, and receiving career counseling.

“Our role is really to help them bridge to their new life in Canada,” Yeo said.

“The hotel facilities are great for a place to sleep and a place to eat, but they are not really equipped for a playground. And if you can imagine being a kid and you’ve just moved to a new country, you want to play. You want to explore the community, you want to see everything your new city has to offer and bring them to a site like this where they can just express themselves and have the space and the freedom to explore different things is really what we want those kids can give. ”

The Liberal government initially pledged to resettle 20,000 Afghan refugees, but increased that promise to 40,000 during the federal election campaign. Edmonton is expected to welcome more Afghan refugees in the coming months.