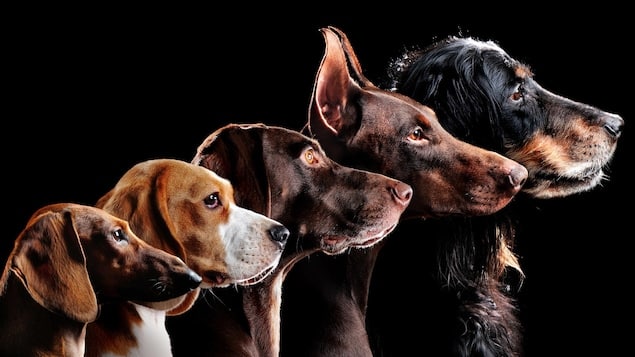 They then combined this information with the 18,385 responses listed in an open database (Darwin’s Ark) devoted to canine behaviors reported by their owners.

The results of these analyses, which included data from 78 breeds, identified 11 variations in DNA sequences strongly associated with behaviors, but none of them were breed-specific.

Our results invalidate the hypothesis that some breeds are more aggressive, more obedient or more affectionate than others.note in a press release the authors of this work, the details of which are published in the journal Science (New window) (in English). Link-study

This research confirms the conclusions of a meta-analysis published in 2015 (New window) bringing together four decades of studies devoted to the heritability of behavioral traits of dog breeds.

All the studies on the subject say the same thing. This is the most comprehensive and complex conducted on the issue to date.says Dr. David Silversides, professor at the Faculty of Veterinary Medicine at the University of Montreal.

The results of the study show that breed explains only 9% of the variation in behavior among individual dogs. For some behavioral traits and some survey questions, the dog’s age or sex are better predictors of behavior.

This work has also shown that the behavioral characteristics attributed to modern breeds are influenced by several genes, as well as by the environment, and are found, to varying degrees, in all breeds.

From wolf to dog

A study published in NatureCommunications (New window) (in English) in 2017 showed that the domestication of the dog would have taken place between 20,000 and 40,000 years before our era from the same population of domesticated wolves.

Initially, dogs were probably selected for very specific functions such as hunting game or herding cattle.

The majority of behaviors that we consider to be characteristics of certain modern dog breeds are most likely the result of thousands of years of evolution, from wolves to wild dogs, then to domesticated dogs, and finally to modern breeds.notes Elinor Karlsson.

The current pure breeds only appeared in the 1800s as a result of genetic manipulation whose objective was to meet a physical ideal and to keep the purity of the lineage.

Current breeds are assigned temperaments and behaviors based on the estimated function of their ancestral population. By extension, a dog’s breed ancestry is presumed to predict its temperament and behavior.argue the authors.

Dr Silversides believes these bans often miss the mark because they are not based on science. We are always looking for simple solutionshe says. We are not saying that genetics is not involved, but with current techniques [pour les phénotypes complexes comme les comportements]one cannot clearly identify a region in the genome responsible for a behaviorexplains Professor Silversides.

” A quick test [comme pour la COVID] would be the solution! But there are no quick tests to assess dog genetics. »

In contrast, the environmental and social factors that contribute to good (and bad) dog behavior are well known. For example, a lack of socialization of the dog can cause problems in the presence of other animals or strangers. He can become stressed, anxious, but also aggressive.

It is thus necessary to carry out an individual behavioral evaluation of a dog to know if it presents problematic behaviors. And you also have to educate the owners, because bad behavior is not race-related.says Dr. Silversides.

The Order of Veterinary Physicians of Quebec also offers training to its members to improve their knowledge in their assessment of canine dangerousness which is increasingly requested by municipalities and which must be carried out by a veterinarian.