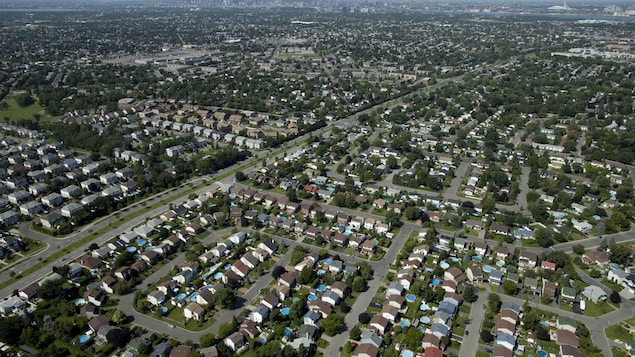 In an opinion to the Minister of the Environment, Benoit Charette, made public on Monday, the Advisory Committee on Climate Change supports that a moratorium on the loss of natural environments is necessary. It bases its recommendations on the latest alarming UN report on climate change.

The Committee is particularly concerned about the fact that the surface area of ​​natural environments in southern Quebec is decreasing at the rate of 0.6% per year.

We sometimes make piecemeal decisions and we see the impact of the combination of all of these strategies.lamented Alain Webster, chairman of the Advisory Committee on Climate Change and full professor of environmental economics at the University of Sherbrooke, in an interview with All one morning, Monday.

” When we look at the entire St. Lawrence Valley, in a dozen years, the Statistical Institute of Quebec tells us that we have artificialized a territory equivalent to the size of the island of Laval. »

You have to be careful, because it complicates life and it will make it difficult to achieve the climate componentargues Mr. Webster.

Beyond the protection of natural environments, the Committee considers that motorway capacity should no longer be increased in the six major urban regions, as long as a public evaluation mechanism has not been set up to take account of mobility, town planning and the supply of transport.

When we do highway projects, whether in Montreal, Gatineau, Sherbrooke, or Quebec City, each time, you have to be able to think about the long-term implications in terms of development. We don’t do it rightexplains Alain Webster.

The major transport electrification project is essential, but not sufficientadds the professor. You have to get out of the fossil part as quickly as possible. We have barely three short decades to get there if we want the rise in temperature to be limited to 1.5 degrees Celsius. You have to be carbon neutralhe explains.

A stone in the pond

The opinion published Monday by the Committee is not intended to take a position on the projects in progress, but it nevertheless constitutes a stone in the hole for the Legault government which advocates a new Quebec-Lévis tunnel, the third link, which would have consequences for urban sprawl.

Recall that at the end of April, the Order of Urban Planners had denounced the speech of the CAQ government on the third link. President Sylvain Gariépy criticizes Minister Benoit Charette for having maintained that the construction of a tunnel between Quebec and Lévis constitutes a brake on urban sprawl.

However, the consensus among experts is that increasing road capacity is a powerful incentive for sprawl and car use.had written Mr. Gariépy.

The opinion of the Advisory Committee on Climate Change goes exactly in this direction, warning against a way of planning the territory dated, which does not correspond to the environmental challenges that cities and governments must face today.

The classic example is obviously the road section. We are going to build a set of roads that will encourage people to take their car to travel further, increase urban sprawl, increase the distance they travel to go to school, to go to workexplains Mr. Webster.

It’s not because people absolutely want to take their car, […] but we induced a very strong demand because we designed our land management systems around the car to meet our needshe adds.

We realize that with the climate issue, this must change. We have to find ways to redevelop our cities so that, spontaneously, it becomes convenient to take public transit, to take active transportation.

For Alain Webster, it is clear that the Committee is addressed to the minister in his role of coordinating government action on climate change.

He therefore hopes that the message will also reach the other ministries, in particular that of Municipal Affairs, where Minister Andrée Laforest is currently piloting the long-awaited National Policy on Architecture and Land Use Planning.

It’s been a very long time since we last updated this policy. She is essentialsays Mr. Webster. A few months before the election, we expect the process of reflection to be stretched out a bit. But this first step is fundamentalhe said.

We say to ourselves that we must adequately integrate this climate issue into these decision-making processes and bring it back to the local level. Cities have an important role to play.

With information from Samuel Rancourt, Carla Oliveira and The Canadian Press