A disturbing tragedy shook a town in Texas this week. Authorities reported that a 15-year-old boy killed his mother, father, sister and two dogs and then made another fatal decision just as the police arrived.

The 15-year-old from South Texas was identified as William Quince Colburn III, who murdered three members of his family, two dogs and later posted photos of his massacre on social media, but committed suicide when police tried to arrest him, reported Friday the daily New York Post citing the authorities.

Police officers began investigating Colburn III after being alerted to disturbing images he posted to a group on social media on Wednesday, Sept. 15, the Aransas Pass Police Department reported in a statement. release.

After he killed his mother, father and brother, the fifteen-year-old published the photos on networks 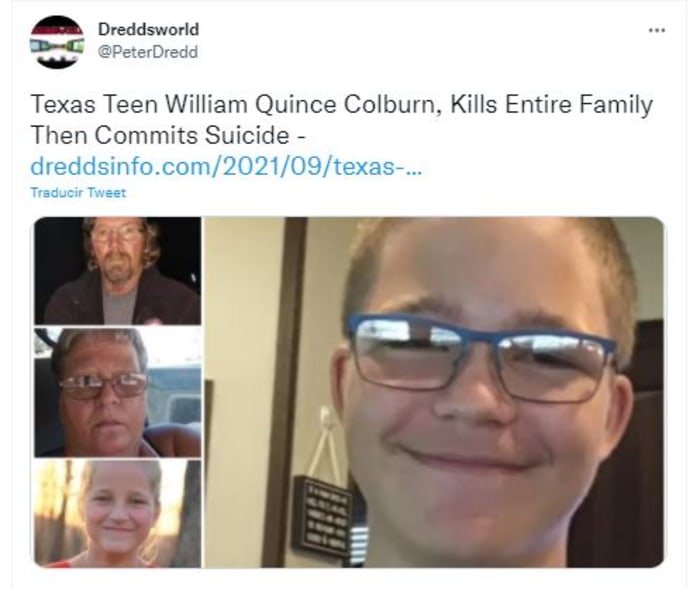 In the publication, Colburn III had threatened to continue the violence of his shooting at a school, authorities said. Then, police tracked the teenager Wednesday night to a trailer park located near Aransas Pass. And when the agents asked him to leave, he refused.

Later, authorities heard a single shot and the noise of someone falling to the ground, police described. When officers entered the motorhome, they found Colburn III dead from a gunshot wound, as well as the bodies of three other victims and two dogs.

They assure that the tragedy could be greater

On Thursday, San Patricio County Sheriff Oscar Rivera mentioned that Colburn III and the three victims were related, but stressed that at that time he did not yet know the details of their ties. However, the portals Konnie Moments e Infobae reported on Friday and Saturday, September 18, respectively, that the murdered were his mother, father, sister and two pets.

According to the New York Post report, police said Wednesday that had it not been for the “swift action” of the social networking site and the other teenage members of the group where the threat was posted, “we might as well have been working in an even more tragic event this morning. “

Threatened to continue violence in a school 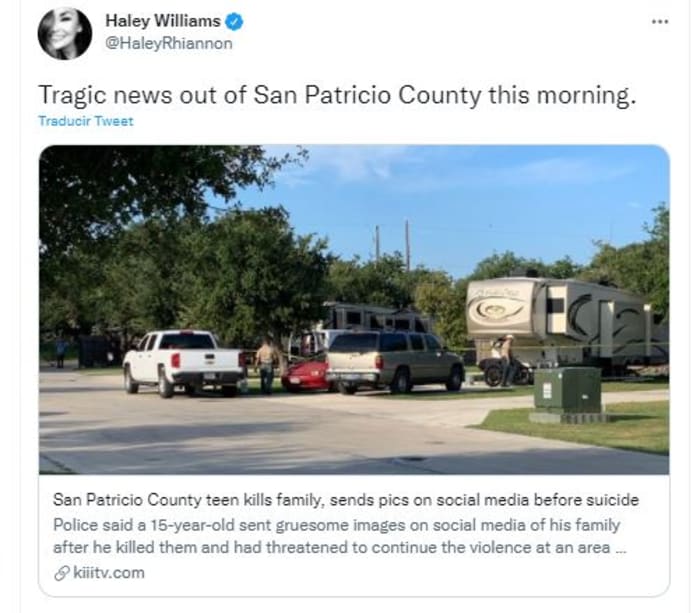 “I’m glad we were able to find him before something worse could have happened,” Rivera said. The NYP indicated that it was unclear which school the 15-year-old who killed his family was targeting, as he was not registered with any local school and appeared to have been receiving homeschooling.

“I’m not sure which school he planned to attack, but he certainly had the weapons and ammunition to do so,” added Sheriff Oscar Rivera, detailing that the young man possessed at least two pistols and a rifle, according to the review published by Konnie Moments.

They raise funds for the funeral

That portal also reported that the fifteen-year-old took to social networks to admit that he killed his parents and his sister before sharing images of the tragedy and threatening to carry out more violence in a school that he did not specify.

After the misfortune, the parents are survived by at least two grown children. On a page of GoFundMe created by Mahria Batts she explained that she is raising funds on behalf of her siblings, “so that we can put our mother, father, little sister and brother in their final resting places.”

Rest of the family was “devastated” by the event 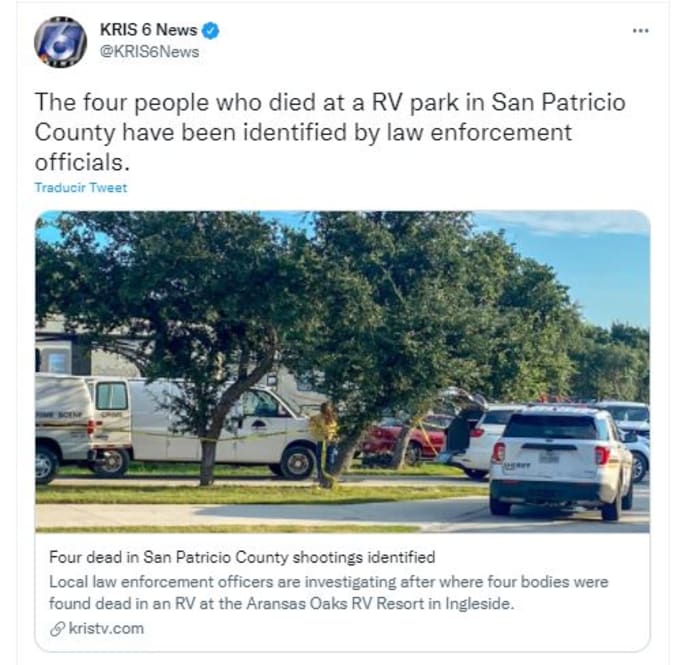 Mahria Batts recounted in the description that this tragedy that occurred on her mother’s birthday hurt them, angered them and left them with the need to understand the tragic events that took the lives of four family members.

“This morning, we all woke up excited to say a happy 53rd birthday to our mother. Instead, we are devastated with news that has shattered us to the core,” wrote Mahria Batts. The campaign has so far raised just over $ 13,000 out of a goal of $ 40,000. 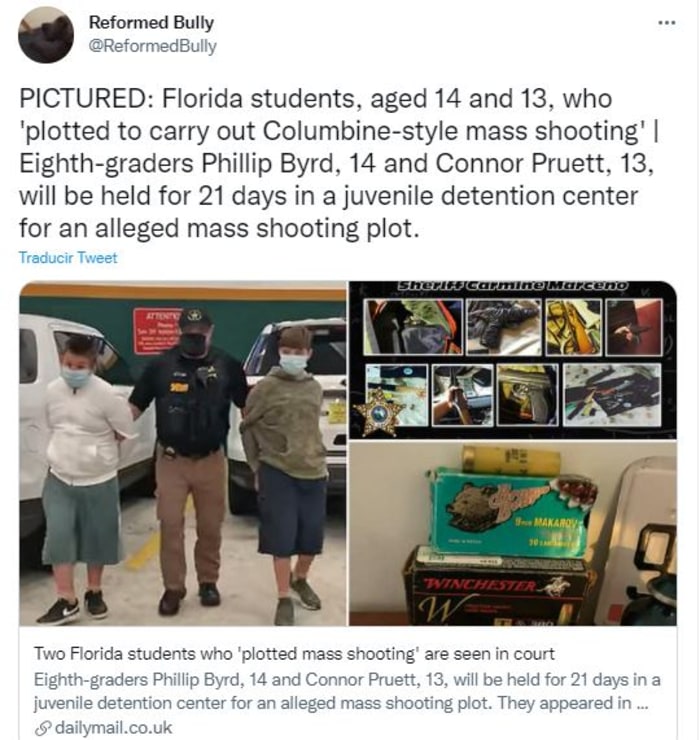 On the other hand, what could have been a tragedy was stopped in time. Two Florida students were arrested for allegedly planning a mass shooting for which they had already accumulated weapons, ammunition and knives, authorities said.

The newspaper Daily Mail reported Monday, Sept. 13, that two Florida middle school students were ordered to remain in a juvenile detention center after they allegedly planned to carry out a mass shooting similar to the tragic 1999 Columbine massacre. 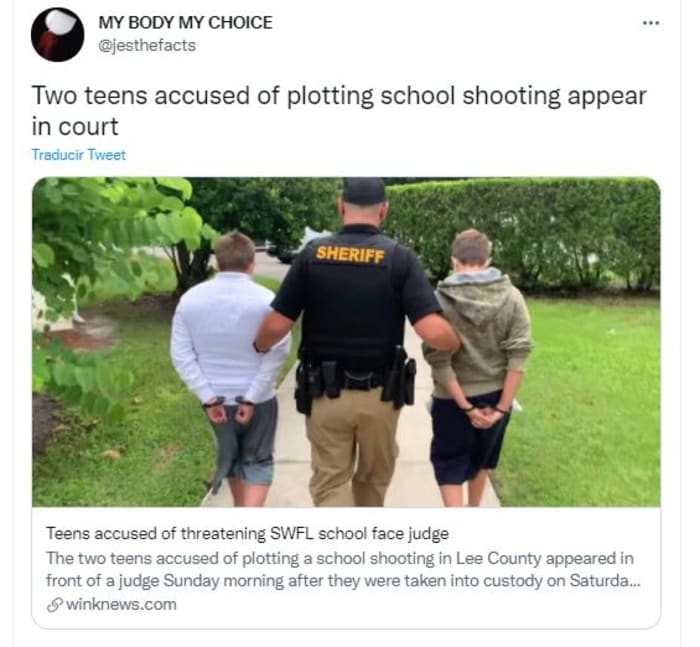 Phillip Byrd, 14, and Connor Pruett, 13, who are eighth graders at Harns Marsh Middle School, in Lehigh Acres, near Fort Myers, Florida, appeared in front of a judge Sunday morning. , indicated the referred medium.

The judge ordered that the two teenagers be held for at least 21 days in a juvenile detention center. The school administration took the event seriously when they found Byrd and Pruett with a map of the school on which each of the security cameras had been marked.

The two students were studying the Columbine massacre

After alerting Lee County police, detectives discovered that the boys were thoroughly studying the Columbine shooting, trying to learn how to build a pipe bomb, and investigating how to buy guns on the black market.

Police also searched the homes of the two Florida students and found guns, ammunition and several knives, the Daily Mail reported Monday when it published the report of what could have become a fatal event.

They charged the two Florida students

Despite the evidence, Byrd’s mother, Carrie Tuller, burst into tears as she defended her son during the court hearing on Sunday. “He’s just a little boy. He didn’t think this was really serious. I didn’t think they were serious, ”the parent expressed in consternation.

The Daily Mail said the two Florida students were detained Thursday for a mental health evaluation and taken into custody on Saturday. Both are charged with conspiracy to commit a mass shooting. To know more details visit this note.