The alarm is a very personal feeling and difficult to objectify. Is tremendously easy to fall short or go overboard, and there are probably reasons to justify an attitude or the opposite. The accumulated incidence rises in Spain by 16% in a week, going in just three days from 138.6 cases per 100,000 inhabitants to 149.3 this Monday.

Worse still is the short-term trend: even without data from Extremadura, the weekly rise is 28.1%, although here something has to do with the fact that Friday 19 was a holiday in half of Spain, which has made up somehow the figures until today. Two autonomous communities, Madrid and Navarra, again enter into a situation of extreme risk (above 250 in the incidence at fourteen days) and two others (Basque Country and Catalonia) may do so shortly.

Is this a reason for reassurance? Of course not. Is it cause for alarm? Again, I insist, it is a subjective question. There are several nuances that make the difference between this possible fourth wave and the previous ones: the main one is that this we expected and we prepared with time against her.

We also knew that there would be a third in January but we decided to open the country and encourage celebrations for the benefit of the Christmas drill. This time, it has not been like that and that makes us optimistic: the figures will get worse throughout the week, maybe the next one too … but there are reasons to think that it will not explode as on other occasions.

From the outset, the main thing is to be clear that, for practical purposes, scaremongering or its absence is irrelevant. You can be very alarmed or little alarmed, but you have to comply with the law anyway. The same will have to do the owners of businesses and those responsible for catering establishments.

If all that is not enough, it will be the responsibility of the authorities to tighten the belt more or less. What we are seeing, for the moment, seems to be going in that direction: as soon as a disturbing rebound is seen, the communities apply precautionary measures so that it does not become the disaster of the third wave. Thus, for example, the Basque Country.

In any case, I insist, the incidents will rise and rise a lot and it will be a disgrace. This is a pandemic of a tremendously harmful virus. However,Will we hit the national highs of 500-600 that we saw in October or the nearly 1,000 in mid-January? It is very unlikely. From the outset, it is being a slow rebound and that is meeting all the expected deadlines.

For weeks now, we have been repeating in these analyzes that the end of the slowdown was expected for the second week of March and that the fourth rebound – we refused to call it a “wave” until its magnitude was seen – would come from the third . So it has been: we have been practically two weeks with mild increases in incidence but with the change in trend already marked.

Now it’s a smooth change. A change that means that, two weeks after the first symptoms, the national positivity remains below 6% -although Madrid has already exceeded 8% and that worries, of course-. A change, above all, that still does not affect too much the dynamics of hospital admissions or the occupation of beds.

If we compare with last Monday, there is an increase in new income in the last 24 hours of 13%, although the prevalence in total beds hardly changes (8,076 by 8,010) and in ICU it even decreases (1,861 versus 1,935). We will have to be very attentive to this parameter because it is directly linked to the following reason for peace of mind: vaccination.

Getting coronavirus is serious at any age. We do not know exactly the sequels nor do we know how long we can drag them. However, In general terms, it is obvious that it is not the same to be infected with 30 years than with 80.

The fact that we are vaccinating at a similar rate to the rest of the European Union – there are the doses that exist – to the age groups that are most at risk in case of contracting the virus, should cause a possible increase in cases, even notable , do not suppose the same increase in hospitalizations and much less in deaths. This is what we saw in Israel, for example, or even in the United Kingdom, where we also infections have stopped decreasing … without this implying an increase in mortality, before on the contrary. 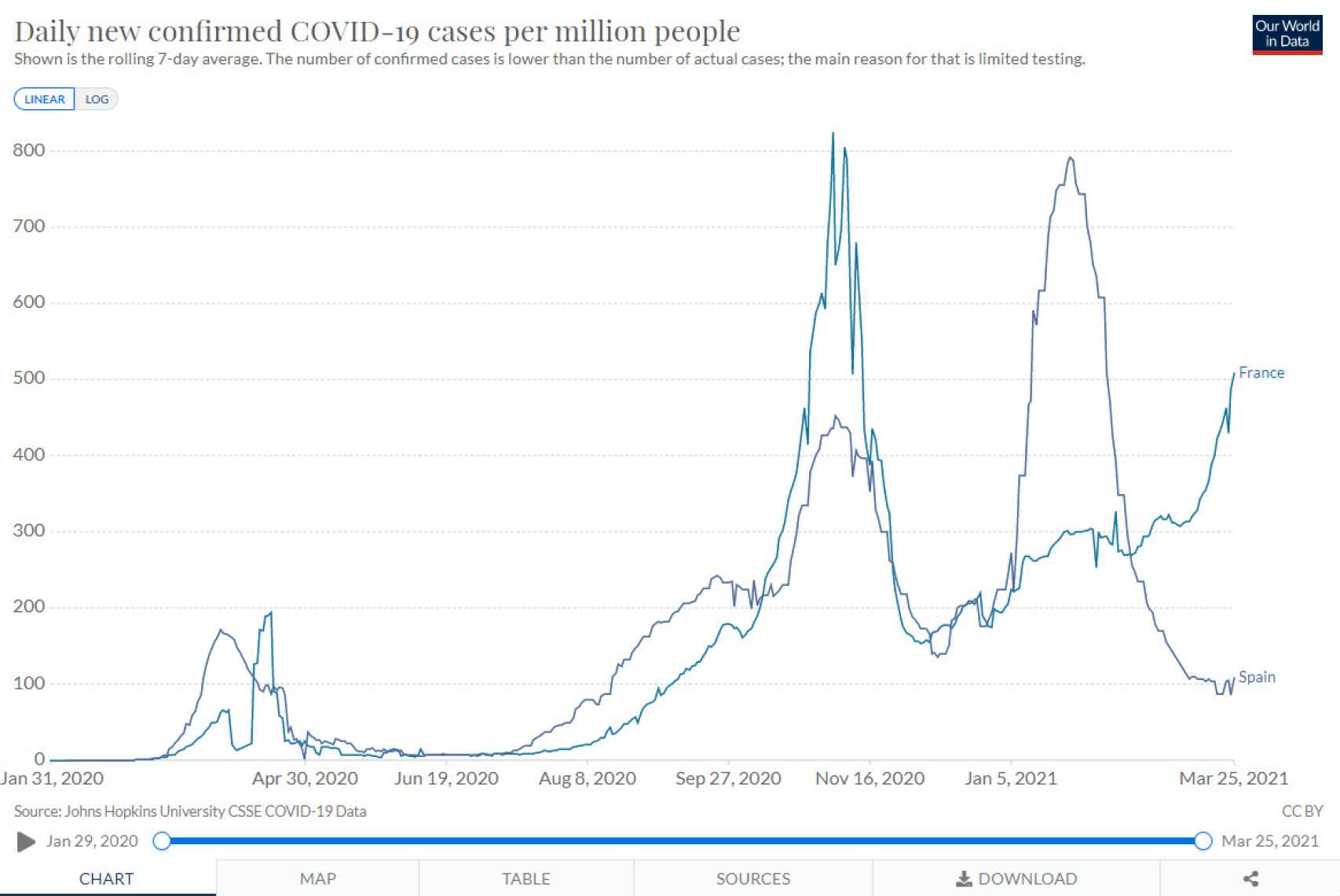 
Our World in Data

The last reason for optimism – and this must always be a responsible optimism, the optimism that occurs in a life or death situation, not a banal optimism of a party unleashed on Espoz y Mina street– is that, for the moment, the countries that suffered the most from the third wave of December-January together with us (Ireland, the United Kingdom and Portugal) do not present a situation that particularly calls our attention.

Of course, in Europe there is a fourth wave, that is undeniable. There is in Poland, there was in the Czech Republic, the hospitals in Italy are again at their highest levels and the French rebound is beginning to look too much like that of the second wave … Now, all these countries – except the Czechs, who are not getting rid of one – they tiptoed past the third wave, so I don’t know if they’re an example.

Somehow and for some unknown reason, it seems that the transmission rates have changed: our second wave was long but with low peaks; the third wave was devastating. ¿Is central Europe suffering what we suffered two months ago or are we the ones who sooner or later will see ourselves in the situation in which they are now? That is the difficult thing to know. Impossible, in fact.

Ideally, Spain experienced its fourth wave as a slight rebound with few serious cases, as we see in the graph above, what happened in France with the third post-Christmas wave. The measures are prepared and have been taken on time, the rise seems inevitable but for the moment it is slow. It won’t stay like this: it will climb faster and higher. Now, we are not here to choose: we knew this was going to happen and it still has. The objective is that, within what is possible, it remains in little.