Uncertainty and fear. They are the two sensations shared equally by international tourists and tourism companies in Spain. With the advance of the Delta variant and the recommendations not to travel from France and Germany or the change of color of the Balearic Islands and the Canary Islands at the traffic lights of the United Kingdom and the Netherlands, bookings have been completely slowed and cancellations have skyrocketed.

The concern of the tourism sector is such that there are those who think that this tourist season could be the same as last. I mean, a disaster.

“The season is not going to be saved. It could be worse or the same as last year ”, points to Invertia Carlos Garrido, president of the Spanish Confederation of Travel Agencies (CEAV).

In the summer of 2020, Spain lost 22.9 million tourists between July and September compared to 2019. Only 6 million arrived because the vetoes of many countries caused the rejection of our country. Situation that it seems that we are condemned to repeat.

From the employers’ association, he affirms that “these weeks are crucial and we are playing a lot.” Recognize that they are already experiencing cancellations and even slowing down the pace of reservations.

In this sense, José Luis Zoreda, vice president of the tourist alliance Exceltur has already warned of the “sudden stop” that have registered the reservations of foreign tourists before the “negative international repercussion of the outbreaks and the contagion rates”.

However, from Exceltur they reveal that “great euphoria is not perceived in the arrival of British tourists” despite the latest announcement from London, which will allow all its vaccinated to travel without quarantine as of July 19. In fact, “the bookings (of these tourists) have slowed down 15% or 20% in recent weeks.”

Here it should be noted that the United Kingdom has returned the Balearic Islands to the amber color in its Covid traffic light, so the English who return from the archipelago will have to quarantine (as is the case with the rest of Spain). A hard blow that has deepened Tui Holland by suspending its trips to the Balearic Islands and the Canary Islands from this Friday.

Although what worries the most are the decisions of the Government of Boris Johnson, since the United Kingdom is the main source of tourists to Spain with 18 million in 2019.

Its absence is noted by destinations such as Benidorm, whose season is on the air, according to the president of the Benidorm and Costa Blanca Hotel Business Association (Hosbec), Antonio Mayor. In fact, many hotels still do not open their doors and it does not seem that they will do so until next year.

Hence the pressure from the sector that asks to improve the diplomatic and communicative work of the Government with these countries. to avoid contradictions between the measures of the CCAA and the “alarming” messages.

Precisely the hope of the Government is in the vaccinated British that as of July 19 they are not obliged to quarantine when they return from their vacations; although they will have to face a series of tests. “The country will remain in amber, but the vaccinated British will be able to come without having to quarantine afterwards,” say sources from the Ministry of Tourism. Reyes Maroto, Minister of Industry, Commerce and Tourism, during her speech at the opening of the Spanish Economic Forum, Canary Islands after the Covid.

In fact, the figure of reaching 40 million tourists at the end of the year continues to stand, although it is becoming increasingly difficult. In so far this year, Spain has received 3.2 million tourists, almost 70% less than last year in the same period, according to data from the National Institute of Statistics (INE).

Although it is true, 1.3 million travelers arrived in May, coinciding with the lifting of the state of alarm. Green shoots that are diluted.

With the decision of the United Kingdom, from the Air Lines Association (ALA) they think the traffic could cheer up. At the moment they maintain the forecast of operating this summer 58% of the flights made in the period of 2019. However, they stain the situation of “uncertain” since everything will depend on the restrictive decisions that could be produced.

In this sense, Jorge Marichal, president of the Spanish Confederation of Hotels and Tourist Accommodation (Cehat). “After these first days of the fifth wave, we must continue to trust in continuing to receive reservations and consolidate the part of the summer that we have ahead of us,” he tells Invertia. He also has a lot of faith in vaccination and the Covid passport.

However, he is aware that “the bad data on infections are causing the fifth wave to slow down the international reserves that came to Spain. The French and German issuer slows down the reserves that have been increasing little by little ”.

The problem is that the forecasts – without these international announcements – were no longer very promising in themselves. Exceltur predicts that the third quarter may close with a 34.9% drop in tourism GDP compared to the same period in 2019.

These losses and uncertainties translate into anguish for many travel agencies that depend on reservations from other countries and on congress and business tourism that, for the moment, remains unfinished despite the test carried out with Fitur in May. “I am afraid that for the second part of the summer we will not reach even 50% of the turnover”, points from CEAV.

With the uncertainty generated by international tourism, many companies trust part of the season to national trips, knowing that they do not compensate for the drop in international ones. The question here is to see how they are behaving. 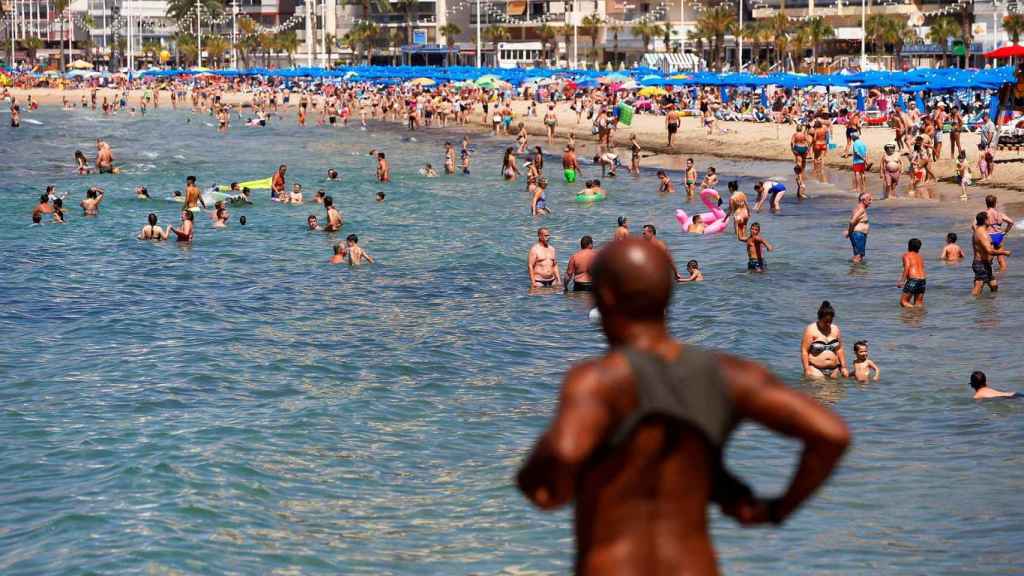 Benidorm beach at the end of June.

Well, according to travel agency online Destinia, 94% of what Spaniards are looking for for summer is a national destination. In fact, 89% of its reservations are Spanish, while 5% are French and the rest is divided between different nationalities.

At the level of reservations for July and August they are still 17% less than the 2019 reservations on these dates, with a difference in price per night of less 8%.

Regarding cancellations, in the last seven days they have increased by 7% compared to the previous days. The five destinations with the highest cancellations are Ibiza, Mallorca, Gran Canaria, Lanzarote and Tarragona.

This is a low figure despite the restrictions that some Autonomous Communities pose or the curfews, for example, of the Valencian Community. Because at the moment they are “Smart restrictions” that do not affect the holidays so much, as the Benidorm employers’ association affirms to this medium.

However, we must also be aware because although national tourism does not compensate for international tourism, it does add up in moments as delicate as this.