A US judge on Tuesday ordered Emma Coronel, the wife of Mexican drug lord Joaquín “El Chapo” Guzmán, to remain in custody awaiting trial after being charged with drug trafficking and helping her husband escape from prison in 2015.

The woman faces charges of conspiring to distribute cocaine, heroin, methamphetamine and marijuana in the United States.

Coronel, a US and Mexican citizen, was detained at Dulles International Airport, in the state of Virginia, on Monday, and transferred to the Alexandria Detention Center, in that same state. His arrest is the latest episode in a bloody saga involving Guzmán, a former leader of the Sinaloa Cartel. 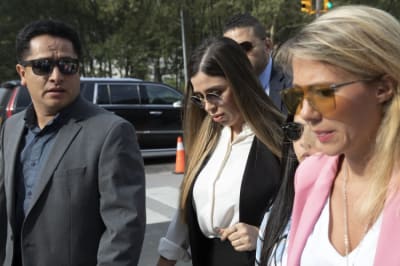 Guzmán became a legend due to two escapes from Mexican prisons that surprised the world and gave him an image of invincible before the authorities. In 2017, however, he was extradited to the United States.

According to Mariel Colón, Coronel’s other lawyer, although the wife of Joaquín “El Chapo” is being held without bail, they do not rule out that later on they may request it as part of their defense strategy.

“At the moment we do not ask for bail but the door was left open and we reserve the right to request it later when we think it is prudent,” said Colón during a telephone interview with CNN.

During the hearing on Tuesday, it was mentioned that the case would be sent to an investigative jury that would impose the formal charges.

Prosecutor Anthony Nardozzi asked the judge for the arrest warrant after assuring that Coronel colluded with others to traffic drugs to the United States.

He also said that it was necessary for Coronel to remain in jail because he worked closely with the leaders of the Sinaloa Cartel and because “he has the financial means to be a serious flight risk.”

The judge read the charges to the defendant, her rights and also told her that if she is found guilty she faces a minimum of 10 years in prison and a maximum punishment of life imprisonment.

Coronel is accused of having joined others in helping Guzmán escape from the Altiplano prison in Almoloya de Juárez, Mexico, in July 2015, US prosecutors say.

After Guzmán was re-arrested in Mexico in January 2016, Coronel allegedly again planned, along with others, another escape attempt for her husband. Guzmán, however, was extradited a year later.

Guzmán was accused of trafficking hundreds of tons of cocaine and other drugs to the United States for at least 25 years. He also led an army of hitmen who tortured and murdered rivals and anyone who represented risks to his drug trafficking, say the US authorities.

Trending on Canadian News  You too, Uncle Sam? In addition to inflation, the US falls in the first quarter

Coronel appeared every day at her husband’s trial – held in the Eastern District Court of New York – in late 2018 and the first two months of 2019 and was captured by television cameras every time she entered or left the building of the court in Brooklyn. Guzmán was sentenced to life in prison.

According to an affidavit issued by Eric McGuire, an FBI agent, and released by the Department of Justice, from 2012 to 2014 Coronel passed messages from Guzmán to other members of the cartel to continue drug trafficking activities while he evaded authorities. Mexican.

Following the arrest of “El Chapo” in February 2014, Coronel continued to pass on the messages her husband gave her when she visited him in prison, McGuire wrote. Mexican authorities did not monitor visits, the agent said.

“I believe that Coronel acted as a messenger between Guzmán and his soldiers, associates and sons,” McGuire wrote. “I also understand that Guzmán continued to direct the drug trafficking activities of the Sinaloa Cartel from the Altiplano prison through various individuals, including Coronel.”