After the news was released this Monday about the arrest of Chapo Guzmán’s wife, Emma Coronel, for alleged drug trafficking, a social network appears picture of her never seen before in a miniskirt and showing her leg.

It should be remembered that a federal judge ordered Emma Coronel Aispuro, who was arrested this Monday in the state of Virginia, on the outskirts of Washington, to be temporarily detained without bail, in addition to facing a minimum sentence of 10 years in prison and one maximum of life imprisonment.

Through an account of Instagram, created by fans of the model, where the photo of Coronel appeared, as is customary, very beautiful wearing elegant clothes.

The photograph shows Chapo Guzmán’s wife, wearing a beautiful one-sleeved blouse and a daring white miniskirt, sitting on a bench showing off her sensual leg.

Wearing pink sneakers and an ornament of roses, in the background, Emma Coronel poses for the camera very sensually, showing off her beauty.

This social network account named Emmacoronell_fans is dedicated to sharing images of the model that has rarely been seen, since on Coronel’s official Instagram, she has very few photos of herself, but the number of followers is impressive despite of the few publications.

In addition to being a participant in the “illegal importation into the United States” of these drugs, the authorities accuse her of “helping and encouraging” the activities of the Sinaloa cartel, led by “El Chapo,” said the judge.

Emma Coronel miniskirt. So far the image of Emma Coronel, has obtained a large number of reactions from the followers, who were concerned about the arrest of the model. 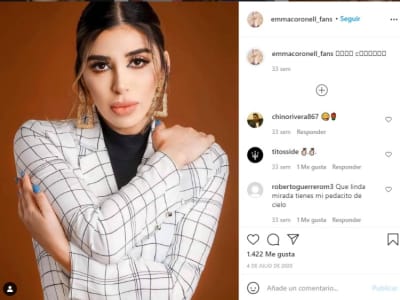 Another were captivated by the photo where she appears in a miniskirt, showing her long and sexy legs, “Rich legs, my life is good.”

Some say that she will soon be released from prison, “The lawyers with money danced the monkey and all of them.”

“This woman sins in elegance”, “Excuse the question, what time do you go out for the fruits queen sighs?”, “You are a beautiful woman without touching”, “hello beautiful you are a sweetheart”, “We are with the Queen of Sinaloa Everything will be fine “,” She is a beautiful woman, let’s see what happens to her “,” Fuck you … the US Government, so that your husband can bend. He wants his wool… and you are a queen ”, were some of the comments.

In another image shared by the Instagram account created by fans of the model, they send a message of support for Emma who is currently going through a situation that worries her followers. 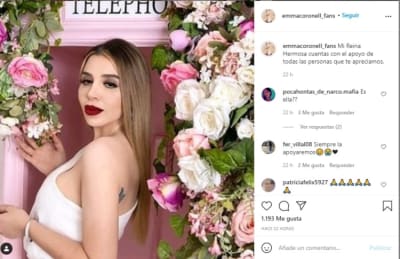 “My Beautiful Queen you have the support of all the people who appreciate you.” This was the message that was sent to Coronel where she looks all in white posing for the camera.

The publication has 34 comments from Internet users who are concerned about her and also send their messages of support so that she will soon be released from prison.