The boys in red are back, and so are the fans!

After about 498 days of waiting, Toronto FC hosted Orlando City SC in a 1-1 draw at BMO Field last night, against real humans.

And even though it wasn’t a red sea, only 7,000 people were allowed in the stands, it was a pleasure to watch anyway. It was the largest gathering for a Toronto sporting event in more than a year, with a mix of front-line healthcare workers and season ticket holders drawn in a lottery.

“It’s been a long year and a half,” TFC captain Michael Bradley told the club’s website before the game. “All that has really been done is for everyone to realize even more how lucky we are to play in this city, to call this stadium our home, to have the fans and support that we have.”

Indeed. In the stands, TFC super fan Tej Sahota, a Day Oner and founding member of the TFC BIPOC Fan Coalition, compared a return to BMO Field to a return home after years abroad.

“I had always said in my head that it would be normal when we go back to a Toronto FC game,” Sahota said. “Well, here we are.”

Sahota said he was a little nervous about attending due to the spike in COVID numbers in the US and was uneasy about the number of fans not wearing masks. Sahota said he spoke to managers at the stadium but saw no retaliation. He said he would not return with his 8-year-old son when capacity is expanded from 7,000 to 15,000 for Wednesday’s game against the New York Red Bulls.

“We are not out of the woods yet, and if TFC doesn’t enforce this, we run the risk of these games becoming wide-spread events.”

Others felt a sense of “surrealism” being again surrounded by crowds of people.

“I live alone and I work from home,” Natasha Burtenshaw-deVries said, “so it’s amazing to be soaking up the energy after spending so much time alone during the pandemic.” 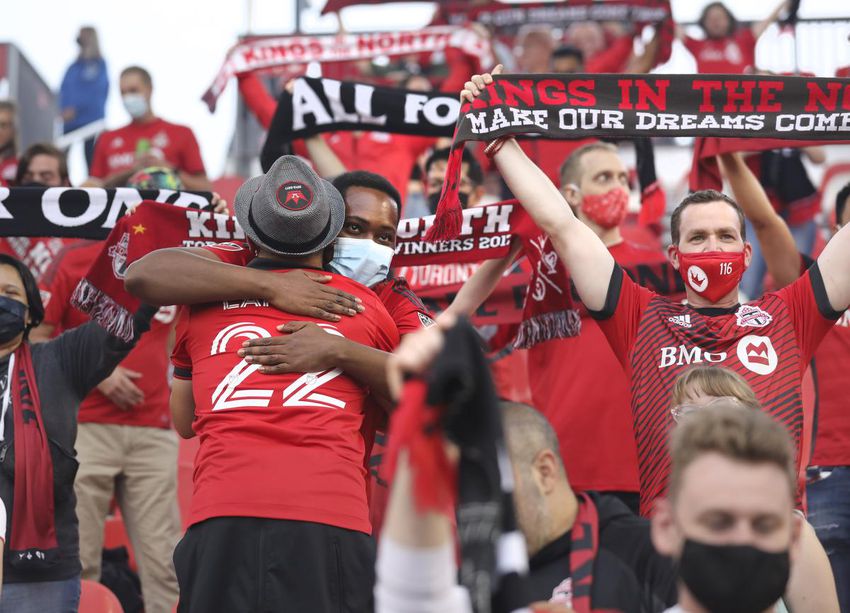 Looking ahead, Burtenshaw-deVries said he hopes to enjoy the energy of the crowd. “Even with limited capacity, TFC fans know how to make noise.”

And fans were also making noise on Twitter with selfies and videos and cheers of relief from Red.

“Fans in the stands, folks. It makes you cry, ”tweeted Alex Bloomfield.

“At a real life soccer / football game! Come on and thank you @TorontoFC and thank you @HBKidsHospital, ”Sean Peacocke tweeted with a selfie of himself in the stands wearing a mask. 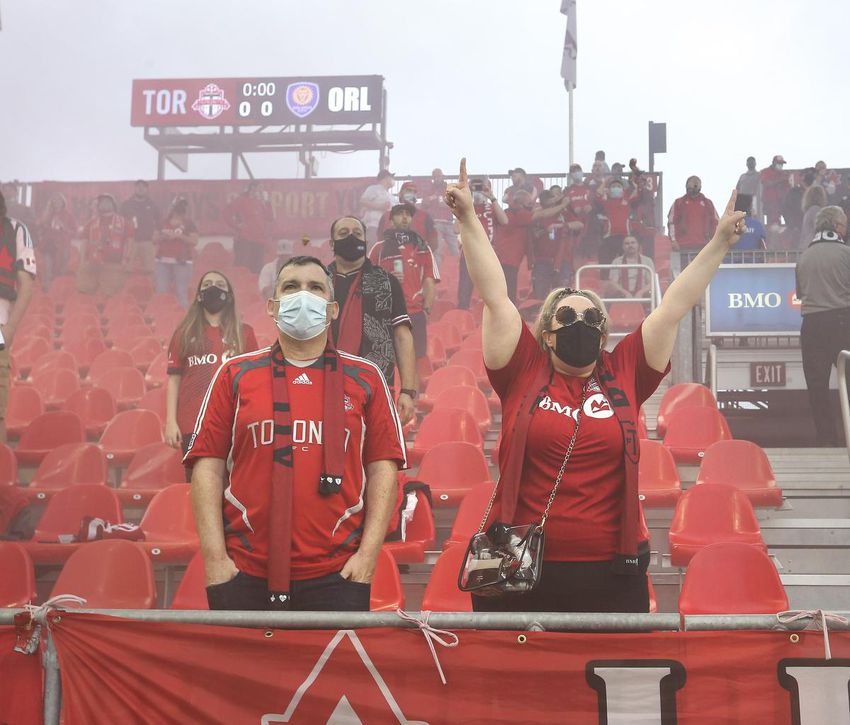 Long before the start, Liberty Village came to life for the first time in a long time when the streets were literally dressed in red, with TFC T-shirts, hats and scarves everywhere lighting up the streets and recently opened bars.

For 16 months, Toronto FC was separated from home due to COVID-19 restrictions on the Canada-United States border. And the community and customs that developed on the Reds’ game days were largely quiet.

The meeting started early, in Liberty Village, as always. There, fans reveled in encounters with acquaintances they only knew, only saw, on game days. There were a lot of nods from fans passing through the streets, people who perhaps didn’t know each other at all, but were instantly united by the colors they wore.

“Even walking around town these last few days, a lot of people have come up to me who have been part of Inebriatti, Red Patch Boys, different groups of fans or fans who have said, ‘I can’t wait to be there. Very excited to be back. We’re behind you, ‘”Reds goalkeeper Alex Bono said during a Zoom pregame call on Friday. “So the support has been really overwhelming. Especially for just 7,000 fans. Everyone is trying to get in, everyone is trying to get their share of the action. It’s very exciting for us. “ 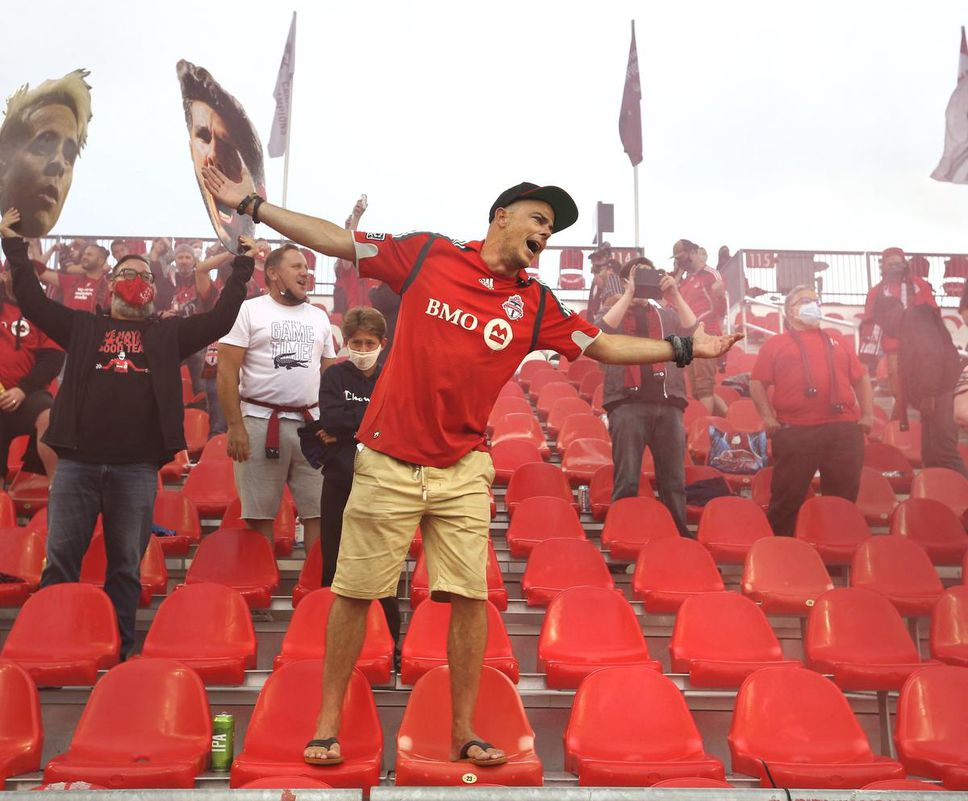 On that walk down Atlantic Ave. from Liberty Village to BMO Field, there was a family-owned makeshift merchandise stand, if it shrunk, with a masked vendor, selling equipment that couldn’t pass the “license” threshold. Across the train station, offers from ticket resellers mixed with the screams and screams of fans fresh off the GO, getting their first glimpse of a vibrant stadium in too long.

The familiar red haze of the flairs stood alone on the horizon of Lake Ontario, the smell of burning hitting your nose if your eyes didn’t catch it first. Flags flew in the traditionally lively Support Sections in the south of the country, uninterrupted between family chants throughout the night. Fans in attendance carried flags that read “Reunite” high above their heads when “O Canada” was finally played on Canadian soil once more.

Not everything returned to normal, of course. Fans lined up, at a safe distance, to enter a stadium that would be less than a third full at the start, this time by design and not because some had stayed at the bar. The crowds entering the building seemed silent as they oriented themselves.

Masks were required, and all attendees were reminded to keep a safe distance of six feet whenever possible. BMO Field has SC Johnson as an “Official Sanitization” partner these days, a reminder of the realities of the past 16 months.

The most important people at BMO Field on Saturday weren’t the players, but the healthcare and frontline workers from 16 organizations across the city. Captain Bradley, Jozy Altidore, and new designated player Yeferson Soteldo may have received a healthy welcome when their names were announced, but it was the Torontoites who stepped forward in our times of greatest need who received the biggest round of applause.

This is how Toronto FC and its players would have wanted it. As a tribute video to frontline and healthcare workers that was emphasized before the game, it is those workers who have best embodied the Toronto club’s motto: All for one.

“Actually, we are not here playing Toronto without their endless support, their endless efforts to combat this pandemic… They are the real heroes and they are the people we really should thank for being home. Toronto, ”Bono said.