As Friday night fell, on a soccer field in Regent Park, a coach gathered his team for an intense chat.

The boys, young teenagers of different ages, had been joking, joking with each other as they gathered around head coach T’ai Simm-Smith. But the mood soon turned bleak, as Simm-Smith asked the kids to raise their hands if they met Thane Murray, a neighborhood recreation and youth worker.

Several arms went up. For the unknowns, Simm-Smith filled in the gaps. “He worked at the community center… He was a good guy, a role model, a positive person. He played basketball. He grew up in this neighborhood, went to school, and did all the right things. But he was met with an unfortunate disappearance. “

There were questions in the group. Murray, 27, was killed in a shooting the previous Saturday and some of the children wanted to know why. Simm-Smith didn’t have the answers: “It was random,” he told them. A teenager chimed in that Murray was a very nice guy; Simm-Smith agreed. “Yeah, he was a cool, cool guy, and I really felt his loss. I’m sure some of you may feel the same, ”he said.

He reminded the group that their coaches were there if they wanted to speak. But by Friday night, what they would be doing was keeping a moment of silence before an exhibition game, which anyone in the neighborhood could join. When they paused, with each teenager kneeling, a stillness washed over the illuminated field.

If any children were grieving, Simm-Smith wanted them to know that they were not alone. He was still dealing with the news. He told the Star that Murray had come to see them play a week earlier. And in the wake of Saturday’s violence, with the death of someone so closely linked to the area’s younger residents, he is one of many left concerned about generational wounds from the persistent gunfire.

Regent Park isn’t the only Toronto neighborhood facing the murder of a loved one mentor, either. Earlier this month, well-known mentor Sam Boakye, 30, was shot and killed in Jane and Finch’s area. Investigators believe neither of them were attacked, but that the attacks may have been in their communities.

Inés García is watching the immediate waves in Regent Park. She works at a local school and, in the days after Murray’s death, she was approached by a boy of about 13, who said he had thought of Murray as an older brother. Not knowing what else to do, Garcia asked if he could give the boy a hug; they both cried.

“My heart really poured out,” he said. “In these times, we feel desperate, like we can’t even help.”

It was more than an isolated event, he said. It was the constant noise of gunfire in Regent Park that worries him that it is affecting children and teenagers in the area. The east end of Regent Park has long been a hot spot for gun violence, police records of reported shootings between 2004 and 2020 show, and those hot spots include the corner of Oak and River Streets, a block from where Murray was killed.

“You see your children, and the children of community members, going through this all the time, trauma after trauma. It never gets fixed. It never heals properly, ”Garcia said, noting that some young people just stopped talking about it. “It heals a bit, but then something happens and the wound opens up again.”

After Murray’s death, a teenager who met him through the community center, and saw the 27-year-old as a role model, suggested to the Star that such violence was expected in Regent Park. “In this neighborhood, things like this often happen,” said 14-year-old Adnaan. “I was thinking why.” 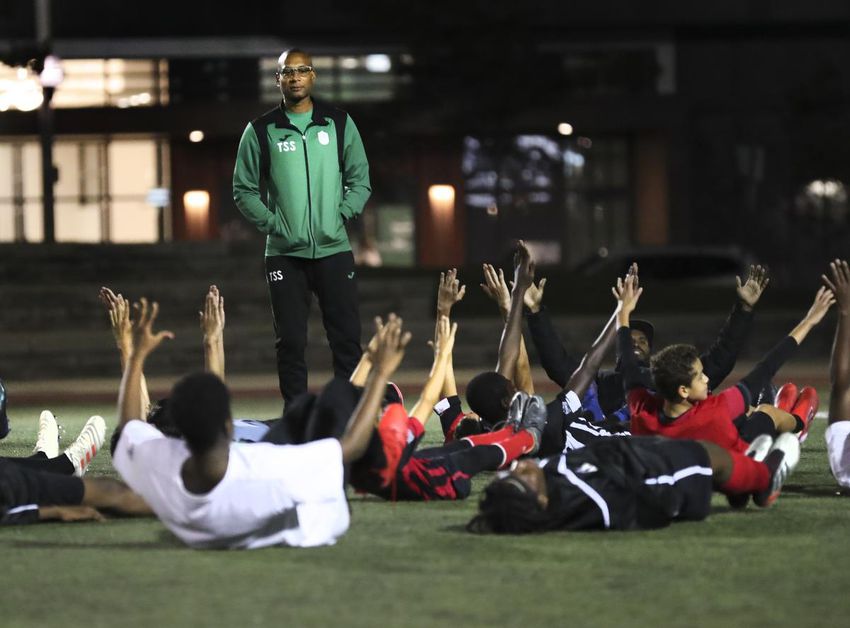 Many people who spoke to Star pointed out how many young people in the community had relationships with Murray and would likely be affected by his death. “One thing about Thane is that he knew everyone in the neighborhood: every kid, every teenager, old or young,” Simm-Smith said.

He worries that Saturday’s shooting will shake those children’s sense of security and make his home feel like a “lost cause.” “It has to affect you, just grow up and meet the people who are shot and killed.”

Metuge Mtongwe, whose 13-year-old son was on the field for Friday night’s game, said he had been trying to monitor the young teenager’s activities more than usual. “If he’s here, okay, he’s free to be here, but I don’t want him hanging around, because I don’t know what’s going to happen there,” Mtongwe said.

Rev. Sky Starr, a Jane and Finch therapist and founder of a peer support program aimed at supporting women in communities affected by the deaths of black youth, told Star that her research has found that at least 130 people are They are affected by the death of a young person, although anecdotally he thinks that the number may be much higher.

For young people, the pain is compounded by the fact that they are at such an important stage of development, socially and emotionally; Research has shown that young people affected by the murder of a friend are especially affected because the death is violent and unexpected. Starr said that what young people need in these situations is support.

“I think they need to know that people care about them. Because many young people, when people die continuously, they feel that nobody cares: the government does not care, the community does not care, ‘who cares?’ Because it is constantly happening, ”he said. “And we haven’t done enough to find ways to prevent it. And it can be prevented: violence can be prevented. “

The deaths of community members like Murray or Boakye also run the risk of sending a distorted message to young people that it is dangerous to be unarmed, said Zya Brown, founder and CEO of Toronto’s Think 2wice, a youth support group. imprisoned and victims of armed violence.

In the wake of Boakye’s death this month, Brown said he received “so many messages” from fearful young people, saying, “That’s why I don’t want to change my life.” His thinking was that if Boakye had been armed, he might have been able to protect himself, he said.

“Now, in the minds of young people, no one will want to put down their gun,” Brown said.

He also noted that the large number of shots (in Murray’s case, the police found more than 50 shells) is something he had never seen before. That level of violence targets an entire neighborhood and the impacts are widespread, he said. “With that, you are putting the entire community on guard.”

Simms-Smith grew up in Regent Park, decades ago. Remember that you faced a loss back then: some distant names, some closer to home. But he believes the shooting last Saturday was especially terrifying and thinks it would be helpful to have counselors available for any child who wanted to speak up.

“I don’t know how many would be receptive, but I know for sure that there are some children who would benefit,” he said. “There are a couple of kids who would really mind for a while. I guess one way to deal with that is to not think about it, to put it out of your head until the next shooting happens. “

Coun. Kristyn Wong-Tam, who represents the area, says crisis teams were working in the neighborhood in the days after the shooting and social workers were brought into schools. But he is also concerned about what happens in the long term when emergency supports recede.

For Mtongwe, what matters is the longevity of the support. “I think counseling is good, but if it’s going to be unique, we need to have role models around here,” he said. “What T’ai is doing… I mean, that makes a difference. They try to give hope to the children. They try to build a generation of people in the future. If you bring counselors, and they advise or advise them and then they leave, what’s next? “

The idea should end violence at its roots, he said, suggesting that more youth programs like the soccer team keep kids engaged. How do you stay out of trouble? Stop before it happens, ”he said.

For now, in Regent Park, many are simply dealing with Murray’s absence.

“When I envision him right now, I envision him interacting with children,” Simm-Smith said. “Play basketball, high-fives, fist bump … just talk to kids, be a mentor, be a leader.”

Wendy Gillis is a Toronto-based reporter covering crime and police for The Star. Contact her by email at [email protected] or follow her on Twitter: @wendygillis