But the 24-year-old said there needs to be more teams fighting at the front.

The Red Bull driver took the drivers’ title following a decision by race director Michael Masi not to follow procedures around restarting the race.

In an interview with BBC Sport, he also said Netflix’s Drive to Survive documentary was “faking rivalries”, and has chosen not to take part.

Verstappen won the final race of last season in Abu Dhabi after overtaking title rival Lewis Hamilton’s Mercedes on the final lap, following a decision by Masi to restart the race early after a safety car.

masi was removed from his role as race director last month as a result of failing to apply the rules correctly.

“The sport doesn’t need to heal, there are these dramatic moments which are part of the sport as well,” Verstappen said.

“F1 is a very tough world. I think Lewis can feel the pain a bit less if you already have seven [drivers’ titles].”

The Dutchman added that Formula 1 needs “more teams at the front, fighting for wins”.

The new season, which begins in Bahrain this weekend, sees new car and tire designs aimed at enabling drivers to follow each other more closely on the track and improve the racing spectacle.

“Slowly we are are getting to that – hopefully these new regulations will give us that boost and we have more drivers on every team fighting. Because at the end of the day this is what we like, right?”

F1 has enjoyed a profile boost from last year’s controversial final race, the new rules and the growing popularity of Netflix series Drive to Survive, which chronicles a number of stories in teams up and down the pitlane.

But Verstappen is one of a few of the sport’s key figures who have refused to take part.

“I watched two episodes, but I was not very impressed. It’s just not my thing, faking rivalries.”

Part of the new series, released last week, focuses on the struggles of McLaren’s Daniel Ricciardo as he watches British team-mate Lando Norris thrive in a car he cannot get up to speed.

“Lando and Daniel are two great people I know – they have really great characters and immediately at the second episode it looks like they are not very friendly to each other, and for me that’s not correct and that’s why I’m also not a part of it.”

Although the series has been widely credited with boosting the sport’s popularity, particularly in the United States, Verstappen believes its approach doesn’t accurately reflect what unfolds. 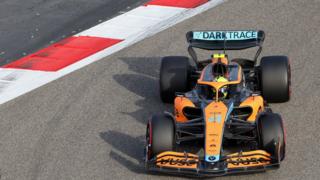 The cars’ front and rear wings have changed to smooth airflow

“At one point [it helps to bring in audience] but that effect also runs out. I think we’re beyond that stage now and it’s more like a reality show in my opinion.

“Plus it takes way too much time anyway. I need to focus on the racing and have private time and not spend another half an hour at the race weekend when they need to talk to you.”

Verstappen said he was very happy at Red Bull, following the signing of a long-term contract, saying he and the team “really click” and share the “same mentality”.

But the 20-time race winner said feels sympathy for the recently sacked Russian driver Nikita Mazepin, following the termination of his contract and his oligarch father’s title sponsorship with the American Haas team.

“You always have to feel sympathy for Nikita himself – everyone, regardless of background, they work very hard from a very young age to be a Formula 1 driver.

“Of course you can have backing but you still need talent to drive these cars in Formula 3 and Formula 2. You need to be competitive and he definitely was that.

“At the moment it’s very complicated for him, but yeah let’s see hopefully in general the world can be at peace again.”

Trending on Canadian News  That's what theater is also for: to make people uncomfortable | Article by Carles Francino
Published On March 16, 2022
By thecanadian
Categories