The pair are expected to meet Ukraine’s President Volodymyr Zelenskyy to discuss the country’s request for more weapons to repel the Russian invasion.

Mr. Zelenskiy announced the visit on Saturdaysaying: “I think we will be able to get agreements from the United States or part of that package to arm Ukraine that we agreed to earlier.

“In addition, we have strategic questions about security guarantees, which it is time to discuss in detail, because the United States will be one of those leading security countries for our state.

“As soon as we have (more weapons), as soon as there are enough of them, believe me, we will immediately retake this or that territory, which is temporarily occupied.”

The White House has not confirmed travel plans for Blinken and Austin, and the State Department and the Pentagon have declined to comment.

• Ukraine has said it destroyed a Russian command post in the occupied city of Kherson, killing two generals and seriously wounding a third. Russia has not commented on this.
• The Russian siege of the southern city of Mariupol continues, with some 2,000 Ukrainian soldiers and civilians taking refuge in a huge steel plant. An attempt to evacuate civilians failed on Saturday.
• Russia said it took control of several villages in the eastern Donbas region and destroyed 11 Ukrainian military targets overnight.
• In Donetsk and Luhansk, Ukrainian forces said they repulsed 12 Russian attacks on Saturday, destroying four tanks, 15 units of armored equipment and five artillery systems.
• Reported shelling in residential areas of Kharkiv, with regional governor Oleh Sinehubov saying three people were killed

It comes as the war in Ukraine enters its third month with no end in sight, many thousands dead, millions made refugees and cities reduced to rubble. 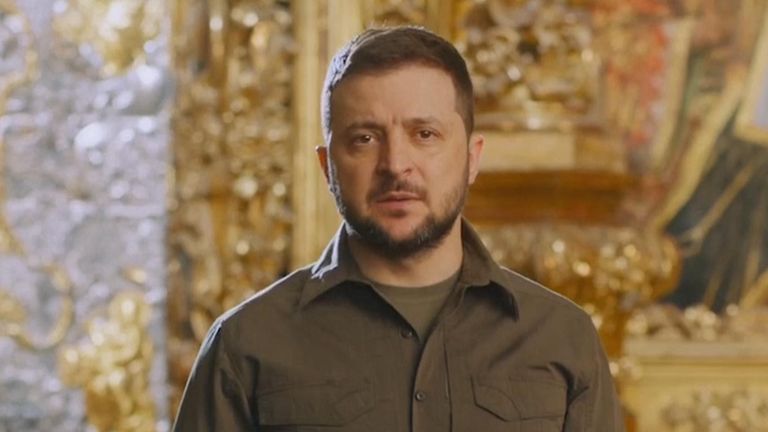 Meanwhile, a three-month-old girl was among eight people killed after Russia fired cruise missiles at the Black Sea port city of Odessa, according to Ukrainian officials.

Speaking about the casualties, Zelenskyy said: “The war started when this baby was a month old. Can you imagine what is happening?

The baby’s mother and grandmother were also killed and 18 people were injured, according to reports.

Read more:
How the Azovstal steelworks became the final outpost in the brutal battle for Mariupol
What are Russia’s plans for the ‘second phase’ of the war and why do they include Moldova?

A readout of the call published by No 10 read: “The PM confirmed that the UK is providing more defensive military aid, including protected mobility vehicles, drones and anti-tank weapons.”