The UK will provide a further £1.3bn in military support to Ukrainian forces as they fight against Russia’s invasion.

The escalation of British aid to by Volodymyr Zelenskyi forces is the highest rate of UK military spending in a conflict since the height of the campaigns in Iraq and Afghanistan.

Johnson, US President Joe Biden and leaders of other G7 nations will hold talks with Ukrainian President Zelenskyy on Sunday to discuss additional support on offer. 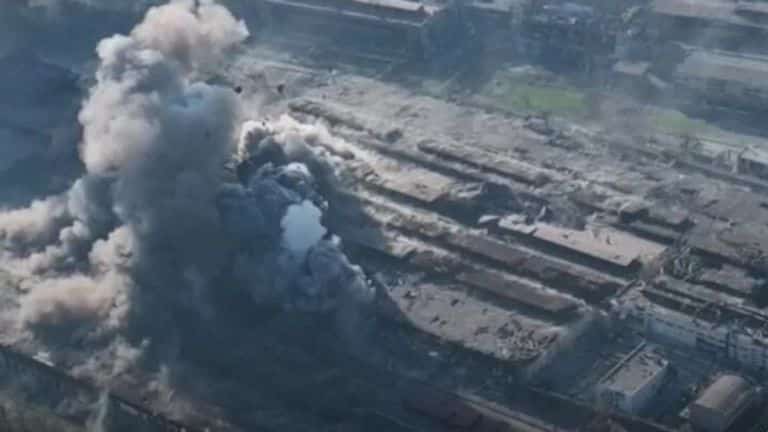 The news comes as Ukraine’s Deputy Prime Minister Iryna Vereshchuk said all remaining women, children and elderly people were allowed to leave the Azovstal steel plant in the besieged city of Mariupol.

She said: “The order of the president has been carried out: all women, children and elderly people have been evacuated from Azovstal. This part of the Mariupol humanitarian operation has been completed.”

Ukraine’s cities are bracing for an expected spike in attacks before Russia celebrates its traditional victory day on Monday.

Johnson to meet with arms companies to discuss production

Johnson will host a meeting of arms companies later this month to discuss ramping up production in response to demand created by the conflict in Ukraine.

Officials said the announcement would help support Britain’s arms industry, which could benefit from the global shift away from relying on equipment from Vladimir Putin’s sanction-battered Russia.

The prime minister said: “Putin’s brutal attack is not only causing untold devastation in Ukraine, but also threatens peace and security throughout Europe.”

The funding comes on top of previous commitments worth some £1.5bn, which included £400m in humanitarian aid and loan guarantees for £700m in additional World Bank loans.

President Biden has promised a package that includes artillery shells, radar and other military equipment.

The White House sees the meeting as a way to show Western unity on the eve of the May 9 Victory Day parade in Moscow.

There has been speculation that the Russian president hoped to use the symbolically important date to highlight his success in Ukraine, but fierce resistance from forces in kyiv has debunked any such claim.

The UK Defense Ministry said Russia’s ability to fight with modern equipment was being damaged by losses in Ukraine and the impact of sanctions.

The Defense Ministry said at least one of Russia’s most advanced T-90M tanks had been destroyed in combat, while sanctions restricted access to microelectronic components for sophisticated equipment.