Two young emergency room doctors, raised and trained in Montreal, are leaving their jobs after just two years to return to Toronto, saying Quebec’s health care model and Bill 96 are to blame.

They head back to Ontario, a move they’ve made before, but this time, they say they don’t expect to return home any time soon.

The married couple work at the Jewish General Hospital and say they see no way forward in Quebec for themselves and their two children, ages three and one.

So two different Toronto emergency rooms are preparing for their arrival, with jobs waiting for them.

“It was a really difficult decision,” said Dr. Daria Denissova, 34. Her husband, Dr. Philip Stasiak, 37, said they took it “with a heavy heart.”

“I love Montreal. It’s the city I grew up in, and leaving it a second time is disappointing,” Stasiak said.

They are leaving at a time when Quebec’s health system has been heavily criticized for being fragile.

Montreal alone is short 18,399 health workers, according to the 4th of july government health system panel.

But after all their agony, it became clear to the doctors that compared to the hospital system they remember in Toronto, Montreal’s working conditions, which they see as harsh and inflexible, are incompatible with raising a healthy family. They say those conditions are a natural consequence of government rules that limit hiring.

And if they still had doubts about the move, Quebec’s new language law, commonly known as Bill 96, sealed the deal for them.

Doctors have no problem communicating with patients in French or English. They are trilingual: Denissova also speaks Russian, Stasiak speaks Polish.

But they are somewhat concerned that the law meant to protect the French language could affect patient care and make an already loaded workplace even more onerous.

“It’s very confusing. What are the real implications of this going to be? Is it a political posturing? How are the laws going to be enforced?” Stasiak reflected. “No one really knows.”

He hopes that at the British-appointed hospital where he works he can continue to use his best judgment, but the unknowns still hurt.

“We are perfectly bilingual, but there are so many acronyms in medicine… and to describe it to another person who needs that information transmitted… wouldn’t it be better to continue like this?” Stasiak suggested.

“I don’t like as a principle that you should dictate who I talk to in English or in French,” Denissova said, when what matters most is communicating effectively with patients.

“It’s irritating that this is even a conversation to have,” he added. “Will people have to show their eligibility certificates when they go to the hospital for care?”

They are not alone in their concerns. Other medical groups, namely the Quebec College of Physicians, have been sounding the alarm about Bill 96 for months.

In an email to CTV News on Monday, the Quebec College of Physicians reiterated that the organization “will remain vigilant” regarding Bill 96 as “the reform could have an impact on the doctor-patient relationship.”

“I just didn’t want to live in a place where I no longer felt like I was representing my views and values,” Denissova said.

THREE PRIORITIES: FAMILY, FLUENCY OF FRENCH AND FREEDOM OF CHOICE

However, the much bigger issue looming over young parents is how Bill 96 could limit their children’s academic options when they reach CEGEP age and after they have attended French primary and secondary schools, such as they did when they were kids.

“We would like them to have the freedom to choose between ‘You know what? I want to go to an English CEGEP or a French CEGEP,’ which is the choice we had made,” said Stasiak.

But they fear changes in the language law will make it impossible.

Bill 96 caps enrollment levels at English-speaking CEGEPs, and is expected to make universities increasingly difficult for francophone and allophone students to get into as their growth stalls at 2019 levels .

Given the restrictions, the couple wants to ensure that their children do not spend all their younger years studying French in a province that could later close the door on their future success.

“They are freezing the CEGEP enrollment in English and they are giving priority to students who come from English schools, and this is now,” Denissova said. “What is it going to be in ten or 15 years?”

The only possible solution would be to send the children to private English schools in Montreal that offer the 12th grade option, so that they can bypass the CEGEP altogether and graduate with an Ontario high school diploma.

But then, their fluency in French could be affected, the couple noted. They’re in a catch-22 unless they get out of Quebec.

“We want them to be perfectly fluent in French … but not at the expense of their future freedom and future elections and career opportunities,” he said. 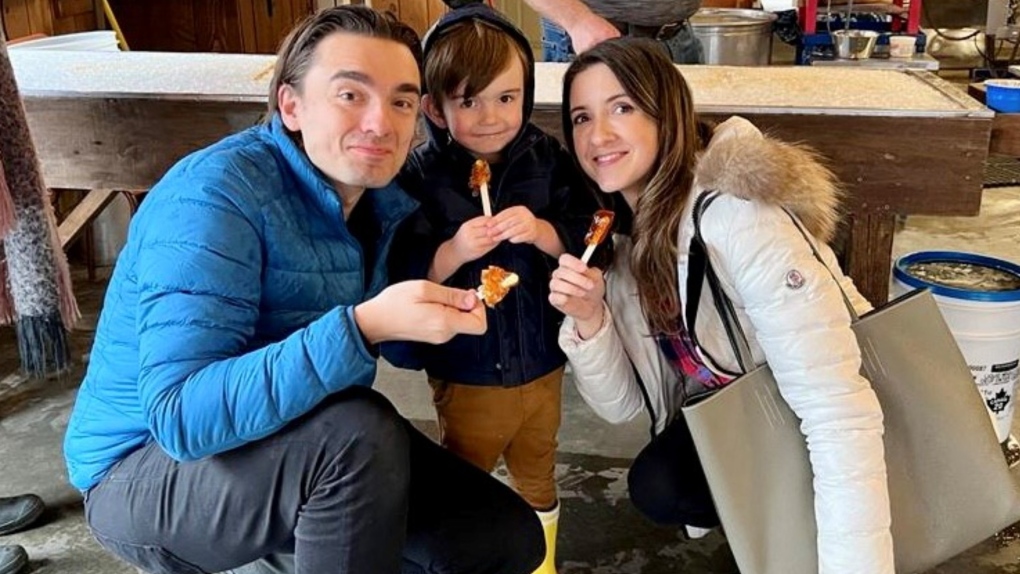 Dr. Philip Stasiak and Dr. Daria Denissova, seen with their eldest son, are leaving Quebec to ensure their children have more freedom in their education.

They went to Ontario the first time because they were unable to obtain permits to practice in Montreal after completing their residencies at McGill University teaching hospitals.

The government determines how many doctors a region or hospital can hire, through a permit distribution system known as PREMs/PEMs (Plan régional d’effectifs Médicaux), and none were available to them.

So for five years, they worked in emergency rooms in Toronto.

“Then once we had our first child, we decided, you know, it would be really nice to go back. I miss the French. I miss Montreal as a city. We’re going to be closer to our parents,” Stasiak. said.

Those elements of Montreal were great for them: the grandparents, the house, the neighborhood. However, after about a year, they said it came true.

“I realized, oh my gosh, this is such a tough work environment and there was also Bill 96 that was all over the news, so all these things started to sink in,” Denissova said.

He wondered if they could handle the workload — lots of shifts and 30 to 50 percent more shifts than in Toronto, he calculated — and stay healthy for the next 20 years if they continued on the same course.

The setting, they said, has nothing to do with how their particular hospital is run, something Denissova observed when she took a few emergency shifts at a different Montreal hospital to help her understand the issues she was facing.

Both young doctors believe the “onerous” workload has a lot to do with the province’s permit system.

“Because of the PREM system, working conditions are much more difficult, work is much less flexible in terms of hours, in terms of shifts,” Denissova said.

When it comes to that evaluation, he has an ally in a veteran Montreal GP who has just taken the Ministry of Health to court over the PREM system and the way it is used to distribute, or not distribute, GPs. in Montréal.

“It doesn’t make any sense that we have restrictions on recruiting,” said Dr. Mark Roper, “when we have such a lack of staff, a lack of emergency physicians, that doesn’t make sense, does it?”

He believes that having more family doctors in Montreal would relieve pressure on flooded emergency rooms because they would see more patients in their offices and make emergency rotations.

“We would certainly welcome and benefit from more doctors,” Denissova said, disheartened to see that doctors decades her senior are still overworking as much as they are.

Nor do they imagine that they will ever have a flexible work schedule that allows them to take better care of their children and take them to day care and school, unless various aspects of the system change drastically.

“This is true,” Roper said. “The PREM system and the PEM system, which is more labor controls for hospitals, force department heads to use only full-time doctors and part-time doctors have a really hard time.”

They are severely understaffed, Denissova said. He would put too much pressure on the rest of the team if he were allowed to cut his hours for a few years, something he will now be able to do in Toronto.

“Almost as soon as I talked to the department in Toronto where I worked before, they said ‘Yes, of course, we’ll happily take you on however many shifts you want to work.'”

“‘If you want to work less hard for some years of your life because you have younger children, we can accommodate whatever you want.’ So the contrast was striking,” Denissova said.

Telling colleagues at the Jewish General ER about her decision was “difficult,” Stasiak said. “These are people that we train with, that we know, that are our friends, I feel like in a way we’re even letting them down a little bit, and they’re disappointed as well.”

“But everyone is very understanding. They understand it because they see the conditions,” she said.

“We need to do what’s best for ourselves, for our family,” even if it means leaving others behind.