On Monday morning, Tropical Storm Fred was moving across the Gulf of Mexico towards the Florida Panhandle, where it is expected to cause heavy rain and a dangerous storm surge. Fox News.

A tropical storm warning is in effect for a portion of the Florida Panhandle from Navarre to the Wakulla / Jefferson County line, which means tropical storm conditions are expected somewhere within the warning area within the next 24 hours, according to the National Hurricane Center (NHC in English) cited by the aforementioned media.

A storm surge warning is also in effect for the Florida Panhandle coast, from Indian Pass to Yankeetown, Fox News said in its report published early Monday.

At 4 a.m. today, Fred was about 160 miles south of Panama City, Florida, with maximum sustained winds of 50 mph, according to the NHC. The storm was moving north at 9 mph.

“On the forecast track, Fred’s center should move across the northern Gulf of Mexico today and make landfall in the western Florida Panhandle this late or early evening,” the NHC detailed.

Through Tuesday, Storm Fred is expected to produce heavy rains, which could lead to flooding in the southeast and parts of southern Florida, as well as the Big Bend and Panhandle regions of the state. Flooding can also occur in southeastern Alabama, parts of Georgia and the western Carolinas, Fox News said.

Watch out for the arrival of Tropical Storm Fred 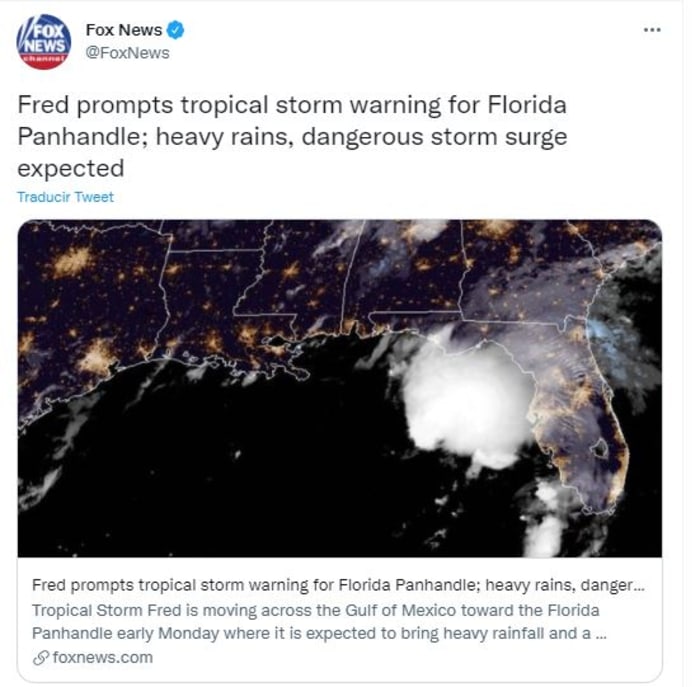 Anticipating the arrival of Storm Fred and its risks, Florida Governor Ron DeSantis declared a state of emergency for the Panhandle region of that entity a few days ago.

On Saturday, Alabama Gov. Kay Ivey issued a statement saying her administration was monitoring the weather and “will be ready to act from the state level if necessary.”

Ivey’s declaration was made on the same day that Fred was downgraded to a tropical wave, before it regained tropical storm status. Tropical waves can contain heavy winds and heavy rains, but they do not circulate around a central point or an “eye” like a tropical storm or hurricane.

Meanwhile, Grace was downgraded to a tropical depression after its sustained winds dropped to 35 mph, below the 39 mph threshold for it to be a tropical storm. As of 5 a.m. Monday, Grace was about 160 miles east-southeast of Port Au Prince, Haiti, and moving west at 15 mph, the NHC said.

The Caribbean under alert 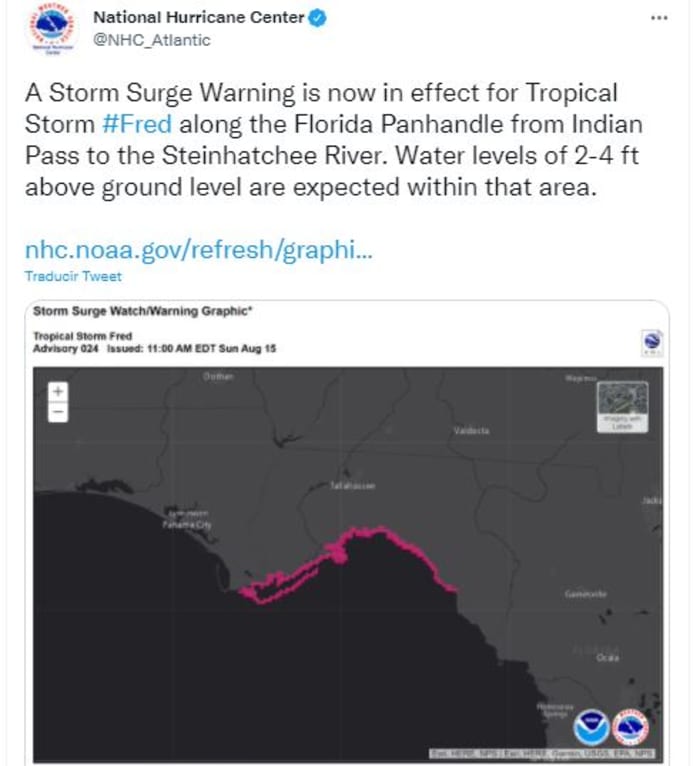 Grace generated tropical storm warnings for Puerto Rico and the Virgin Islands. Those warnings were suspended, but a tropical storm watch remains in effect for all coasts of the Dominican Republic and Haiti, where total rainfall of around 4 to 8 inches was forecast through Tuesday.

Weather experts predict that Fred will also cause roughly the same amount of rain in Florida’s Big Bend and the Panhandle area, Fox News said.

Fred left thousands without electricity in the Dominican Republic

As a tropical storm earlier in the week, Fred had weakened to a depression as it turned over Haiti and the Dominican Republic, knocking out about 400,000 customers and causing flooding that forced officials to shut down part of the country’s aqueduct system. disrupting the water supply for hundreds of thousands of people.

Local officials reported that hundreds of people were evacuated and some buildings were damaged. A deadly 7.2 magnitude earthquake also struck Haiti on Saturday, leaving more than 1,200 dead and 2,800 injured.

State of emergency for a third of Florida 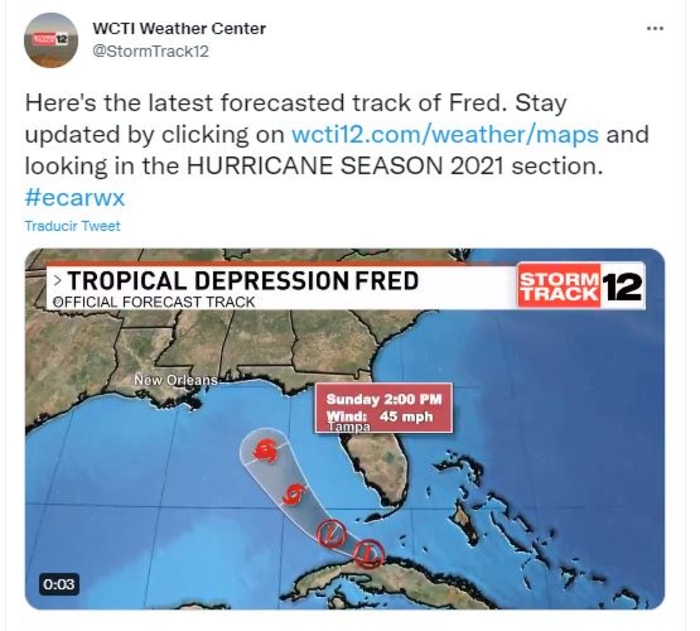 Authorities declared a state of emergency on Friday night for a third of Florida, due to the arrival of tropical depression Fred, which was forecast to arrive on Saturday, in addition to a second major storm, the newspaper reported. The Sun.

Trending on Canadian News  Demons in the garden: politicians and actors, by Manuel Gutiérrez Aragón

Governor Ron DeSantis issued the executive order after predicting that Fred will become a tropical storm again, as it finally did, when it made landfall in Florida, the newspaper published after 11 a.m. on Friday night.

Fred on the way to Florida 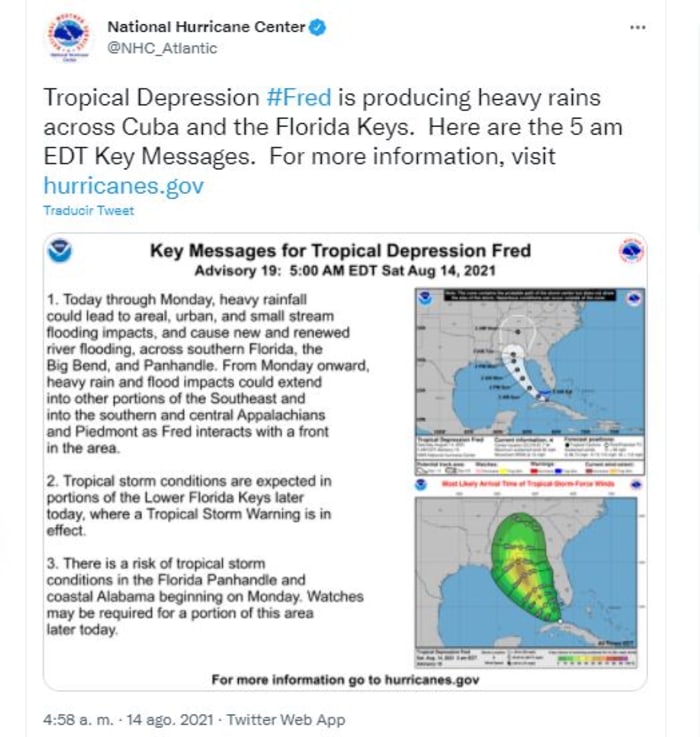 Tropical Depression Seven, another system in the Atlantic, was also forecast to become Tropical Storm Grace on Saturday as it approached the Caribbean, The Sun detailed.

The National Hurricane Center (NHC) predicted that Fred could revert to a tropical storm before hitting Florida. Fred moved along the northern coast of Cuba on Friday and was on track to reach the Florida Keys on Saturday and southwest Florida on Sunday, forecasters indicated over the weekend. 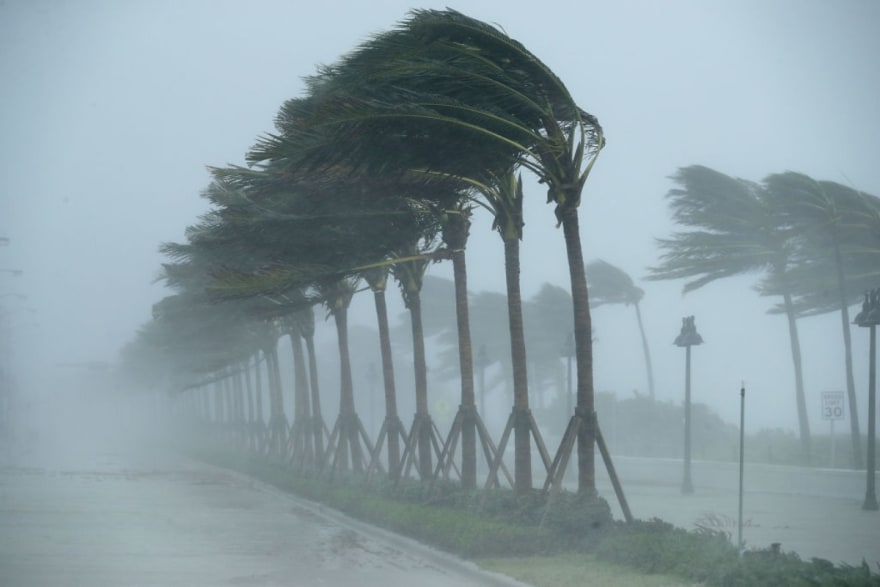 A press release quoted by the aforementioned outlet explained: “By declaring a state of emergency, Governor DeSantis ensures that state and local governments have enough time, resources and flexibility to prepare.” 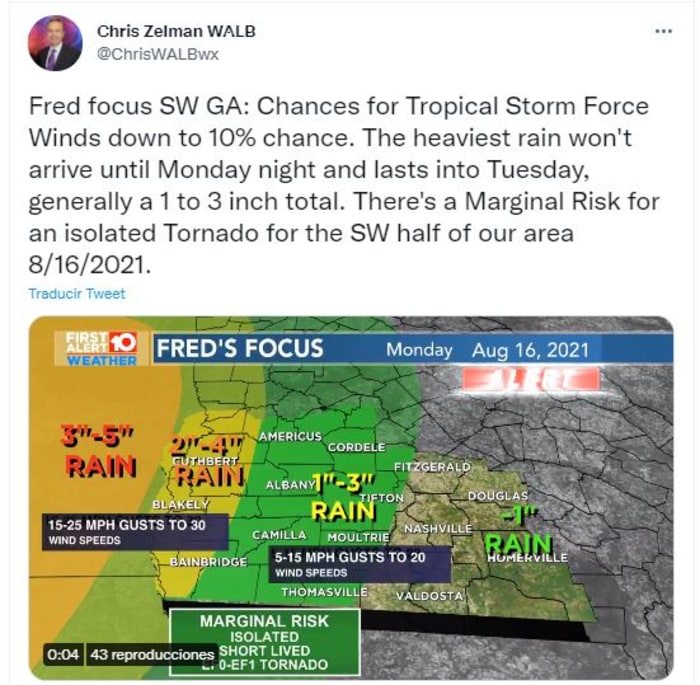 ABC News also reported Saturday that Fred was about 90 miles south of Key West in Florida that day and was moving northwest at 13 mph with sustained winds traveling at 35 mph with stronger gusts.

Tropical storm conditions were expected in parts of the warning area in the Florida Keys later on Saturday, with a possible tornado or two in central and southern Florida, the ABC News report warned.