Chris Doyle has an alter ego: Mysterion, a mentalist who reads minds and performs surreal tricks all over the world. He also has an alter-alter ego, as a collector of thousands of retro toys, including fighter figures, original Star Wars action figures, He-Man knockoffs, and Smurfs.

Doyle began collecting the wrestlers in the late 1980s, when he would go to see his favorites perform live at Maple Leaf Gardens. He bought them from Toys “R” Us, logged garage sales, and even bought them secondhand from school kids. “The older brothers always had the best,” he says. Growing up in a small Toronto apartment with a large family, she stored her finds in milk cartons that she kept in her closet. “Then when I got my own place, I got another shelf. Then it got a little bigger and bigger. “

Now nearly every square inch of Doyle’s West End apartment, which he shares with his girlfriend, online talk show host Lizz de Savoye, is filled with vintage toys, tchotchkes, and ghoulish oddities. Your dedicated The “toy room” alone has some 12,000 figures lining more than a dozen bookcases from floor to ceiling, each shelf designated for a particular line of toys.

“I collect everything that I didn’t have when I was a kid,” he says. “so everything from 1974 to 1990. I want everything from Happy Days to GI Joe, Dungeons and Dragons to dark lines of toys like the insect warrior Sectaurs that nobody bought. “

An entire shelf is dedicated to his wrestlers, ranging from classics like Hulk Hogan and Andre the Giant to more recent reproductions of icons like the Japanese wrestling character Tiger Mask. One shelf is filled with licensed He-Man toys, while another overflows with the Galaxy Warriors, which Doyle says were only available at dollar stores. His oldest piece is a 1939 wooden Superman, the first action figure ever made., which bought at a toy fair in Hamilton.

Despite his extensive collection, Doyle is not too fussy about keeping it in museum-like condition. “It is plastic. It breaks down, ”he says. “It shouldn’t be treated like a Faberge egg.”

In addition to toy shows and hobby shops, Doyle encounters some of his oddities while traveling as Mysterion. For more than 20 years, Doyle has acted as Mysterion and, alongside Steffi Kay as the duo of the Sentimentalists, played Las Vegas and Los Angeles, cheated on Penn & Teller and was featured on “America’s Got Talent” where they hit the quarter finals. And although many of his toys are valued in the thousands, he is not interested in selling them. 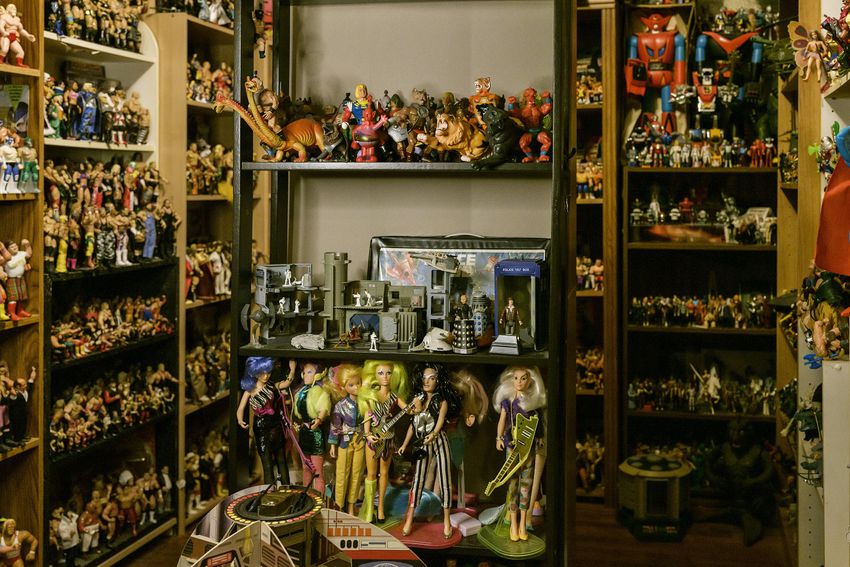 “For me, toys are a memory that can bring a moment into someone’s life,” says Doyle. “I remember going to Lawrence Plaza when I was a kid with my grandmother and getting Smurfs. When I see the Smurf Village that I have created, I remember my grandmother. “

Over the past 20 years, Doyle has also accumulated oddities such as a spotted stuffed calf with a shrunken face from hydrocephalus and an albino deer with scoliosis; a “cursed” doll, whose previous owners allegedly had several fires in the house; Victorian-era dentures made from cadaver teeth; a human skull from the London plague. “I still get excited when I see an unusual piece and learn the stories behind it. The stories are dark or interesting, or are based on myth, magic, or superstition. They are like a spooky fairy tale when you remove the layers, “says Doyle.” 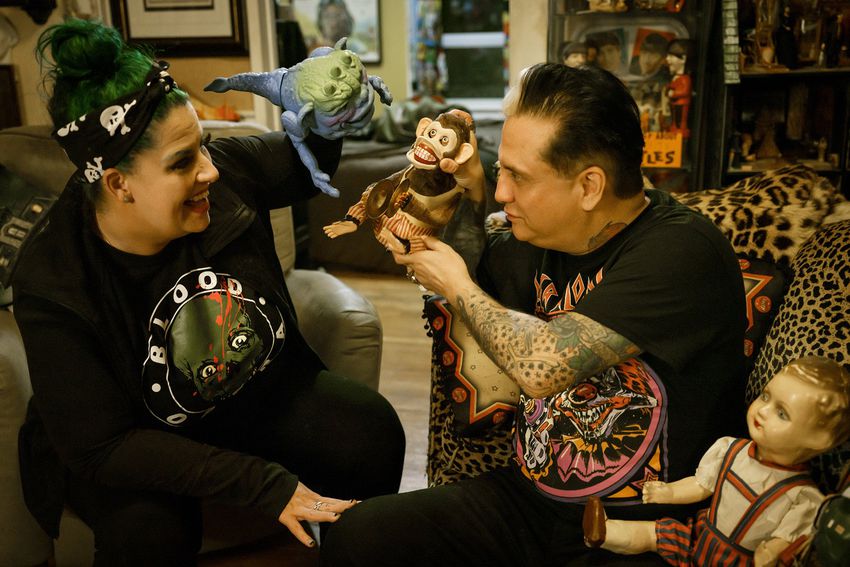 His fascination with creepy artifacts also dates back to his childhood, when he loved to make jokes (one involving plastic hands, fake blood, and a chorus of screaming peers) and was obsessed with Ripley’s Believe It or Not in Niagara Falls. .

Although Doyle’s house seems to be packed to the brim, he says he can always make room for more. He is currently on the hunt for the remaining three Remko figures from the American Wrestling Association that he needs to complete his collection (Shawn Michaels, Doug Somers, and Sheik Adnan Al-Kaissie) and the 1970s Weebles Haunted House.

He is also collecting old Halloween masks, and the dream is to one day make a Mysterion mask. “I’m an artist and I love pop culture,” he says, “and I love the idea that all these things that we idolize are immortalized as these little toys.”