Brian Evinou sat in his seat at Scotiabank Arena and watched his characters come to life.

Known among the online Maple Leafs community for his post-game comics, the Scarborough cartoonist was wearing his John Tavares jersey and drinking a beer while taking in Game 5 against the Tampa Bay Lightning. He was also trying to identify the theme for his forthcoming midnight art project by him.

“I’m always thinking of what the comic will focus on. Right now we’re thinking slow start for sure, the Leafs aren’t starting on time,” he said after a rough first period that saw the Leafs outshot 14-5 and outscored 2-0 by the Lightning. Then he pointed to the ‘C’ on his jersey. “I want to see the captain come through tonight.”

A sombre Evinou returned to his seat along with the rest of the anxious crowd, reaching for silver linings from the aforementioned slow start. Less than four minutes into the period, one of Evinou’s favorite characters followed the artist’s prompts and inserted himself into the Game 5 story. Tavares scored his first of the playoffs, a goal that sparked a dramatic come-from-behind win to give the Leafs a 3-2 series lead and his comic from him a happy ending.

“It is probably going to be an incredibly late night,” Evinou said. “But we’ll make it work. We always make it work.”

Evinou, who works at a small animation studio in Toronto and also teaches animation at Durham College, has been drawing comics after every Leafs game for the last two seasons. There are a lot of late nights for the 41-year-old, who has a son to get ready for school and his day job in the mornings. The best-case scenario is a game ends at around 9:30 pm. It takes about three hours to draw each comic and, if he can come up with the idea in a reasonable time, he aims to be in bed by 1 am at the latest.

“The story of the game or narrative of the game usually becomes very clear from watching it, and then you’re kind of looking for a twist or something that strikes you as important or funny,” he said. “It can be anything.”

Evinou’s comics began as notebook doodles in high school and evolved into long-form books that he would sell at the Fan Expo. He started Leafs comics when Auston Matthews was drafted in 2016 and picked up a bit more during Mitch Marner’s contract negotiations in 2019. Evinou was fully immersed in sports talk, whether it was on the radio, podcasts or social media, and always felt the desire to be apart of it. He had found his own way of getting involved with the hockey discussion, and Leafs fans started following along with him. He ramped things up beginning with the Leafs’ playoff bubble series against the Columbus Blue Jackets in 2020 and did the same for the NBA bubble Raptors-Celtics series. That was when the post-game comics really started to resonate with fans online.

“I had some really tough family things happen at the beginning of last season, and I was kind of looking for a distraction,” Evinou said. “And the comic was just, I did the first game of the season and people were like, ‘Oh my god, I hope you do this every game.’ I was like, ‘Ah, I don’t know if I can do this every game.’ ”

Next thing he knew, he was 25 games into the season. 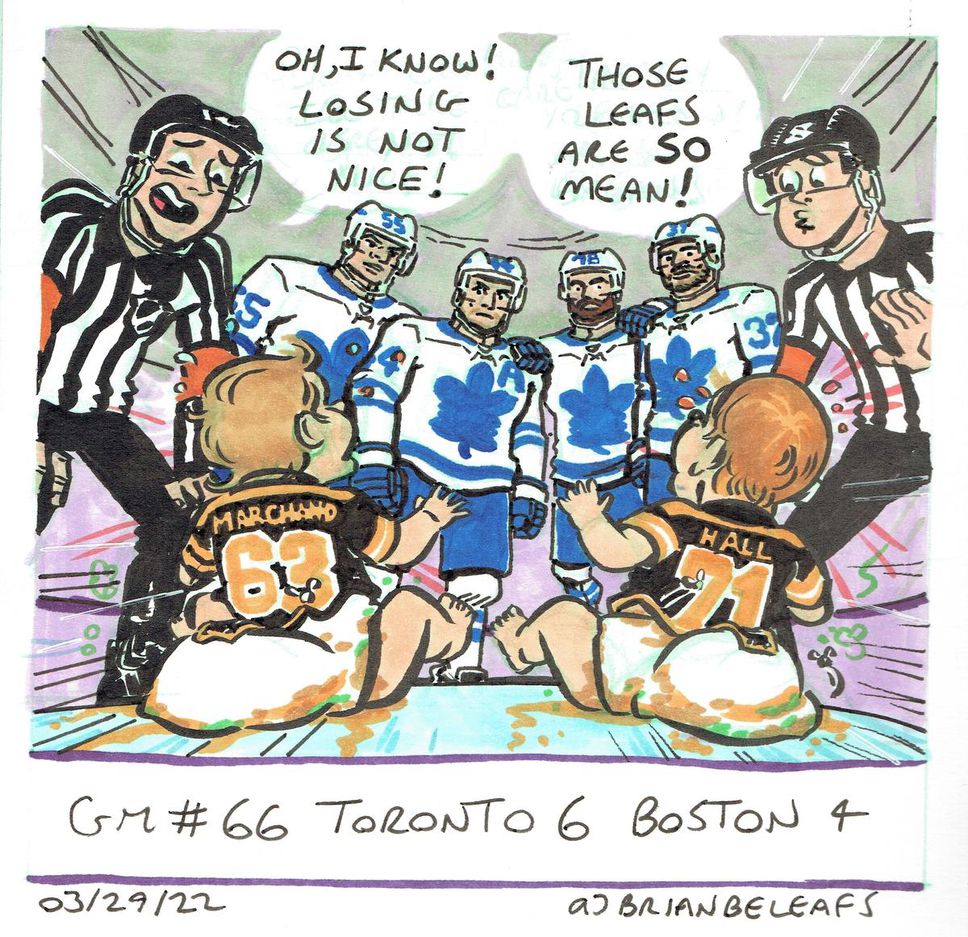 Drawing the Leafs players so regularly has given Evinou a sense of connection to his favorite hockey team. He loves to showcase the personality of Jack Campbell, or William Nylander’s style, or the poise of the Leafs captain who used to play for his hometown Oshawa Generals. His animation background of him really comes out when he can emphasize physical traits like Matthews’ mustache or Pierre Engvall’s neck.

“I find the reason you get good at drawing is because you enjoy spending the time at the table,” Evinou said. “I love being involved in the conversation of the Leafs, and there is so much anxiety being a Leaf fan, so it’s just being able to direct it somewhere.”

Eighty-eight games and counting, Evinou’s playoff comics will carry on as far as the Leafs will take them.