There were a few hours until the demonstration on Wednesday, called to condemn a terrible homophobic aggression in the heart of Madrid. It was not yet known that this attack never took place. The young complainant, aged 20, returned to the Central District police station (Leganitos street) to explain again what happened. About thirty agents had been working for three days and there was no sign of the eight hooded men.

None of the 11 cameras near his home saw anything. Neither do the hundreds of balconies that the “event” street has. No neighbor, not even the family that lives in the first, heard a single scream. The agents, the press and even the public opinion were already beginning to suspect the veracity of that story.

At the Leganitos police station, on Wednesday afternoon, the cake was finally discovered. Several agents questioned the young complainant again, the “victim” who had been telling a lie for three days. Finally, the commissioner himself took the reins of the interrogation. This man, trained by the FBI as negotiator, settled the matter and elicited from the young man the truth that we all already know.

The commissioner appealed to his common sense. “We are going to stop this,” he told him, as revealed this Thursday. the newspaper Nius. He told him that the demonstration would start in a few hours and that with spirits so heated, there could be incidents and charges. Finally, the young complainant broke down and confessed.

She made everything up so her boyfriend wouldn’t know she had been unfaithful. During this Wednesday and Thursday it has been speculated that the young man could be a sex worker, but no official source has confirmed this detail. The police were able to verify that the attacks were consensual, that the “marking” of “fag” on the buttocks allowed him to do so. It was the result of a sexual and sadomasochistic encounter with two other people.

This confession was possible thanks to the intervention of this policeman, the highest authority of one of the most important police stations in Madrid. This man has dealt with kidnappers, extortionists and all kinds of criminals who are assumed to be more hardness than the young complainant.

Hours later, the demonstration was also held, due to the rise in real homophobic aggressions that is being experienced in Spain. “That a lie does not shut up your truth “, pointed to a banner of the demonstration. “That the tree does not prevent us from seeing the forest,” Equality Minister Irene Montero tweeted.

A protester holds a poster during this Wednesday’s demonstration in Madrid.

Shortly before the demonstration began, the false attacked man left his Malasaña portal under the gaze of this journalist and a team from Cuatro al Día. “I just want the earth to swallow me; you have misrepresented everything”he told reporters. Surely, he never thought this lie would get so out of hand. He confessed that he just wanted to be with his family and went straight and head down to the Tribunal subway.

This Thursday the content of the complaint that the young man presented days before to the Police was also known. Has made it known the program Public mirror and the story is as follows: “It would be 5:15 pm in the afternoon and when I arrived at the door of my house, I observed eight individuals running towards me from the front. They were wearing black, with black sweatshirts and a white hood. I open the door and they go inside. Then I go in too. They’re standing there, they stare at me and they say ‘fag, you’re a fag, fag.’ And I answer them: ‘So what?’

“Then they pounce on me, put me against the wall, they put a razor to my neck and mouth and say ‘if you talk I’ll stab you in the mouth’. Then they throw me to the ground. One sits on my back and others grab my arms and legs to immobilize me. They rip off my shirt and cap. Then they pull down my pants and underwear while they yell at me: ‘Fagot, shit-eater, disgusting’ and say something about the antichrist. Then they start to crack me on both cheeks of my ass ”. 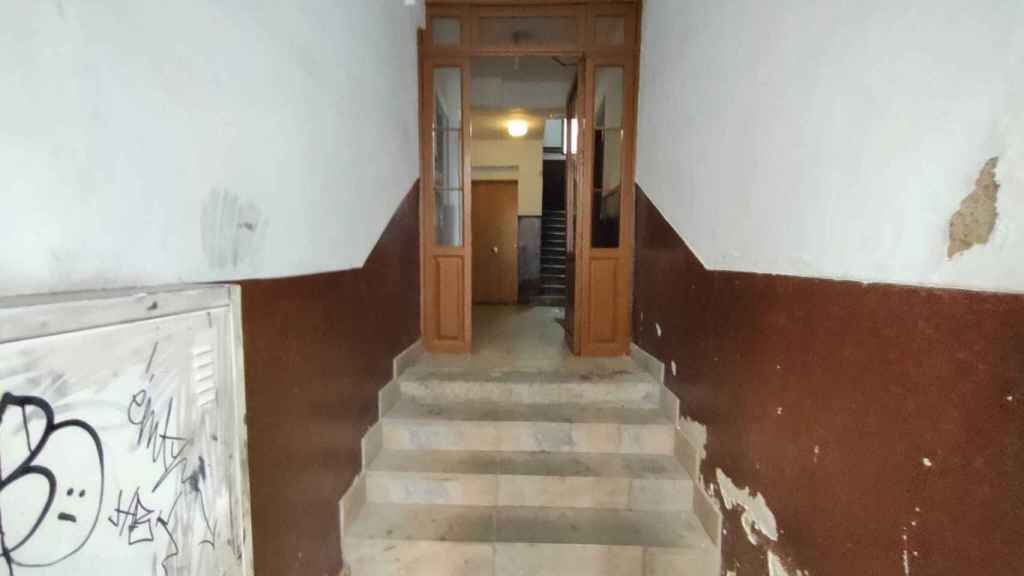 The portal of the false attacked, where there was no aggression.

At that moment, a person comes into play that no one has managed to locate because, like the hooded men, he never existed: “An old lady from the street sees what is happening in the doorway, knocks on the glass and shouts: ‘What are you doing? Leave it! ‘ Then they let go of me and run away. That woman saved me. When I got free I went home and when I arrived I called my boyfriend, told him to take things to sew the wounds on my ass and I told him what happened. When he was coming home, he met a couple of policemen and told them what had happened. They recommended that we go to a medical center and then report it to the police. So we went to the Jiménez Díaz Foundation. “

This homophobic aggression had aroused the indignation of thousands of Madrilenians and members of the LGTBI community, who saw helplessly how a safe and secure space was being taken away from them. gayfriendly like Malasaña. The Police mobilized members of the Provincial Information Brigade of the National Police, in charge of investigating terrorism and other crimes of radical organizations.

Likewise, Sánchez called for this Friday an urgent meeting of the Commission to monitor the plan to combat hate crimes and will also request Congress and parliamentary groups to speed up the processing of the law for equal treatment and non-discrimination, known as zerolo law. That meeting is going to be held, according to the president after learning the falsehood of the complaint.

Yesterday we learned that the attack in Malasaña, Madrid, was a false complaint. This cannot prevent us from seeing reality. Hate crimes against LGTBI people have increased. I want to convey my affection to the collective and the commitment of the Government in the defense of their rights pic.twitter.com/s8R9oxbjwa

The mayor of Madrid, José Luis Martínez-Almeida, denounced this Wednesday the “signaling” that the city of Madrid has suffered these days by left-wing groups. PSOE, Más Madrid and Unidas Podemos used this to charge against Vox and its “hate speech”, as well as against the “complicity” of Isabel Díaz Ayuso and Almeida’s “equidistance”.

Both the PP and Vox condemned the aggression, although it is true that the secretary general of the far-right party, Javier Ortega Smith, he directly linked it to illegal immigration. “What we ask is that the information be clearly stated: the violence has a direct cause with the massive entry of illegal immigration,” he said in an interview on Spanish Television.Finally, there were no immigrants, no hooded men, no aggression, or anything. And that has been known thanks to a commissioner with left hand —In bullfighting jargon, not ideological— who drew the truth using his head.