The national convention of the PP started this Thursday in Santiago de Compostela with three heavyweights -the former president Mariano Rajoy, the president of the Xunta Alberto Núñez Feijóo and the vice-president of the European Commission, Margaritis Schinas– and with a very clear message not to govern with “anti-European and right-wing populism”, that saying: with Vox.

The day was inaugurated Pablo Casado (The leader of the PP will be present every day of the traveling convention, which will also call in Valladolid, Madrid, Seville, Cartagena and the weekend in Valencia) with Rajoy, whose “reformist” government action he claimed.

But the most profound message was left by the host, Feijóo, in a conversation with Schinas, one of the main international figures who attends the ideological meeting of the first opposition party. His words were reminiscent in some way, due to the emphaticness against Vox, of Casado’s speech in Congress on the day of the motion of censure of Santiago Abascal a Pedro Sanchez.

“We have never ruled, vice president, with those who don’t believe in Europe“Feijóo asserted in a clear bet on what the future strategy of the PP should be, which he also stated with another formulation:” We have never governed with just anyone. “

The leader of the popular Galicians pronounced that warning, in addition, a few meters from Casado, in which it is the great bet of Genoa to project its alternative to the Government of Pedro Sanchez for the next general elections.

The head of the Galician Government, the only popular baron who continues to enjoy an absolute majority, launched a whole volley in his speech against a “populist and reactionary front“which is located, to be exact,” to the right and to the left. “ 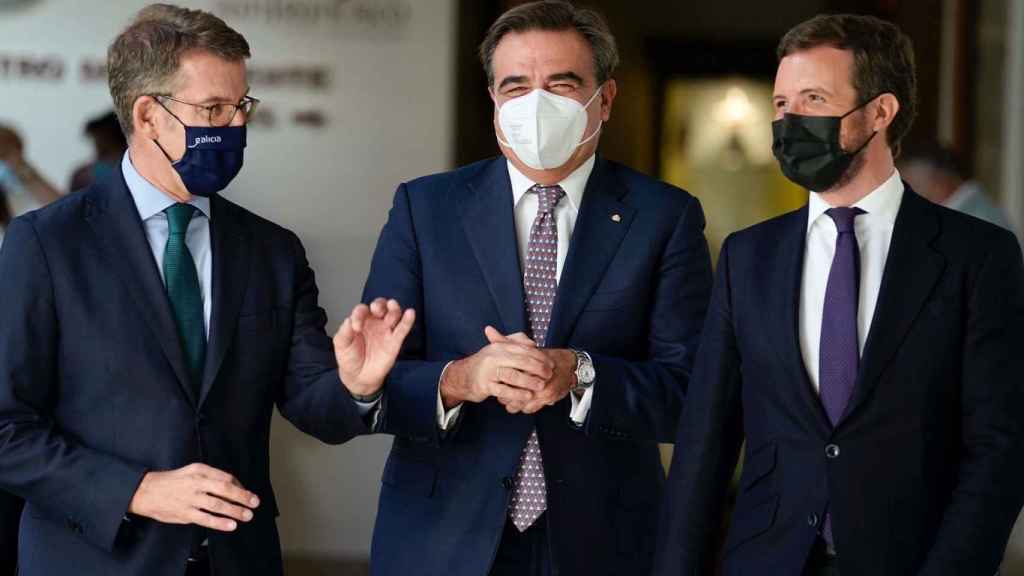 Feijóo, Schinas and Casado, this Monday in Santiago.

Feijóo, who governs in a community where Vox does not have institutional representation and neither, for a year, Podemos, congratulated itself on the latter after the electoral strength shown years ago by the tides of the purple formation, and attacked “the infantile regression of politics “which, in his opinion, is the populist phenomenon.

It also affirmed that these populisms of both ideologies have “identical objectives”, the “same rhetoric” and denounced that both “question the consensus that build Europe day by day.”

To finish his message, Feijóo asked “not to fall into the traps, for example of nostalgic postulates, something that we have never been. We have not been xenophobic, unsupportive, reactionary … We leave that to other parties,” he reiterated in a new veiled dart to those of Santiago Abascal.

For Feijóo, the essential difference between a populist party and another that is not is given, in favor of the second, in its ability to “manage”. Something that links to his political vocation because if not, “he would be a commentator.”

In a more superficial way, given that his intervention focused more specifically on economic matters, Rajoy also alluded to populism and its causes. In the opinion of the former chief executive, the “economic efficiency” accredited by the PP is the best guarantee against “all kinds of populist temptations that, as is known, have been and continue to be very much in vogue in Europe in recent times, and also in our country”.

Because the rise of this type of formation is found or can be found, Rajoy pointed out, in “threatened identities, government corruption or immigration” but, above all these factors, he asserted, in economic crises. “There is no doubt that the difficulty in finding work, low salaries, public services not working, poverty … all of this undoubtedly creates the temptation for some to give their support to parties that believe they are going to do so. fix everything in a quarter of an hour and that the others had neither knowledge nor experience, nor efficiency “he argued.

Along the same lines, Feijóo claimed “reformism” as the best defining feature of what the PP should be. An attitude that, among other things, would go through not denying any virtue to governments of other political colors.

To exemplify it, he said that about the management of the socialist president Jose Luis Rodriguez Zapatero he would not change neither the driver’s license for points nor the anti-smoking law. Previously, Rajoy had no qualms about recognizing two things that, he said, “have been done well” after the pandemic, such as aid from the Official Credit Institute (ICO) or ERTE, although he lashed out at the Sánchez government for not having given enough “direct aid to companies.”

Likewise, and in a more sarcastic tone, he affirmed before Casado that “it is our fate” to receive bad economic inheritances from the socialist governments and then straighten them out.

Margaritis Schinas, for his part, he said he was glad that “in this convention they talk about the fight against populism, because it is a fight that we have to take on.” The Greek leader even alluded to the Nazi party in his country, Golden Dawn, which had 10% of the vote in the 2014 European elections but is now in a clear decline, at a time when in Athens there is a center-right government chaired by Kyriakos Mitsotakis, which will also attend the popular convention this week.