During high school, Nancy Haddad was never able to get the exact haircut she wanted. So, he turned to the world for inspiration, checking out the things of his fellow travelers and people on the street.

Her obsession with hair led her to pick up the scissors herself after high school and head to work at a barbershop in 2015. There she met stylist Daniela Pérez Martínez, with whom she became linked due to their respective recent breakups. Their camaraderie turned to friendship, then love.

The loving couple soon rushed to New York to practice their craft, and there, they had a revelation. “New York was very inspiring in every way,” says Haddad. “It was the first time we were introduced to the term gender neutral. The types of people we would connect with in our chairs were very different from what we were used to at home, from the way they all dress to their personalities and their hair. “

It was the kind of clientele they missed in Toronto. “The queer community in New York is huge,” says Haddad, “and queers are very innovative when it comes to how they want to be presented.” After two years in New York, the two decided to return to Toronto and start their own salon with gender-neutral cuts and prices, where everyone would be welcome. They named it LES Studio, after New York City’s trendy Lower East Side neighborhood, and priced their services based on hair length and complexity of the cut, rather than arbitrary gender lines.

It was a match made in hair heaven, according to Haddad. “We both have our strengths,” she says. “I deal with short to medium hair. I am also a visual learner and teacher. Daniela is more business oriented. She likes to make sure everything runs smoothly. She specializes in creative medium-to-long styles such as plush toys and asymmetrical looks. “ 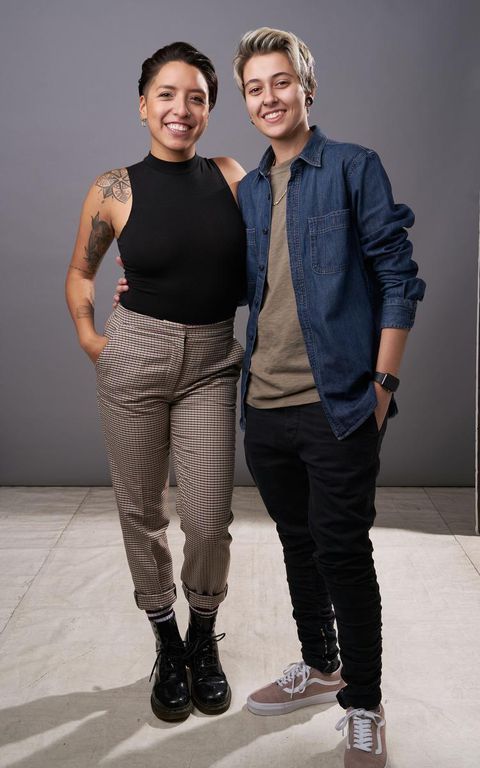 However, the moment of its grand opening? Not so heavenly. They obtained the keys to the store last February, but were unable to open until July due to COVID-19 restrictions. His saving grace? The support of friends and family, and even future clients. “We were able to create an Instagram account and continue before we opened,” says Martinez, “(so) people were already booking with us.”

Toronto has been suffering from gender-neutral options, Martinez says. “For some queers, it’s still hard to get into some hair gaps and feel like no one is judging you.”

To give back to the community, they offer pay haircuts what they can on the last Sunday of each month for those who can’t afford a salon experience. Everything LES Studio does that day, including tips, goes to a different organization. “We do what we can where we can to help those in need,” says Martínez.

After all, Haddad and Martinez know how crucial hair can be to self-expression. “Seeing our young clients get more gender-affirming haircuts gives us hope for the future,” says Haddad. “His parents, being so supportive and loving our space? It means a lot to us, because it makes us feel like we’re doing something right. “