This Tuesday, August 31, the evacuations at the Hamid Karzai airport in Kabul (Afghanistan) end and a new stage opens that will unfold in two different scenarios and that is absolutely crucial: the humanitarian crisis.

On one side, the European Union (EU) faces the challenge of distributing to the hundreds of thousands of evacuees on international flights that have reached its borders on different flights and through the hub created in record time between Kabul and Madrid.

And on the other, a real ordeal begins for the 39 million inhabitants who will remain in Afghanistan and who will need help from the international community.

The EU’s goal is to develop a series of measures to “avoid a repeat of the 2015 scenario, when Member States faced enormous migratory pressure” due to the war in Syria.

On the 24th, after participating in a meeting of leaders of the G7 – richest countries -, the president of the European Council, Charles Michel, urged to avoid the creation of a “new market” for human traffickers from Afghanistan, by time that assured that the EU will protect its borders.

The european commission already said that will quadruple its humanitarian aid to Afghans this year, up to about 200 million euros to be earmarked for urgent needs in Afghanistan and neighboring countries.

Meanwhile, the Twenty-seven are called to show solidarity in welcoming evacuated Afghans, something they can only do on a voluntary basis.

A woman with her child in her arms at the Red Cross camp in Avezzano (Italy).

The Commissioner for Human Rights of the Council of Europe, Dunja Mijatovic, on Monday asked the 47 member states of the organization not to reject Afghans fleeing from the Taliban and seeking protection in the Old Continent at their borders.

In a statement posted on his website, Mijatovic states that the Council countries “face a moral and legal imperative to treat Afghans seeking protection in accordance with their human rights obligations.”

For this reason, it encourages them to “unequivocally commit and manage the arrival of people fleeing the terrible situation in Afghanistan.”

The commissioner applauds the States that set a “positive example” with their commitment to host, and criticizes that many countries have announced the closure of borders, the construction of walls, the creation of obstacles to asylum and returns.

To the countries that invoke a new “migration crisis” or learn from the “lessons of 2015” – the wave of Syrians with the war – to reject the reception, Mijatovic reminds them that the “real crisis” is being experienced by the people of Afghanistan, “especially women and girls”.

Trending on Canadian News  The Metropolitan Area of ​​Barcelona will rehabilitate 13,650 apartments by 2026 with a planned investment of 172 million

That is why he asks them “not to remain isolated from the consequences of the events in Afghanistan” and “not to take advantage of it as an opportunity to further erode the protection system in Europe.” This, he adds, “would only aggravate the real crisis”, that of the human rights of refugees, asylum seekers and immigrants.

The second measure is to ensure that the goal of “preventing irregular immigration” does not lead to “the de facto denial of human rights.”

Lastly, Mijatovic calls for human rights-based solutions for Afghans that have been in the Member States for years and for newcomers.

The camp of Italy

In Italy, some 2,000 Afghans evacuated from Kabul after the arrival of the Taliban will be transferred to a large camp in Avezzano, in the Abruzzo region (center), where they will temporarily stay to pass the quarantine period and be able to be vaccinated against the coronavirus waiting for them to find accommodations across the country.

The center is managed by the Red Cross and Civil Protection and it has a hundred tents, an outpatient clinic, and hygienic services to house Afghan families and it is one of the most important reception operations carried out to date in the country.

“The opening of our Avezzano facility to the fleeing Afghan population – represents one of the largest and most complex reception operations of the Red Cross to date. Hundreds of volunteers have come from all over Italy to provide hospitality, psychological support and of health to these vulnerable people, demonstrating once again our solidarity in the middle of the Covid-19 emergency, “explained the president of the Italian Red Cross, Francesco Rocca in a note. 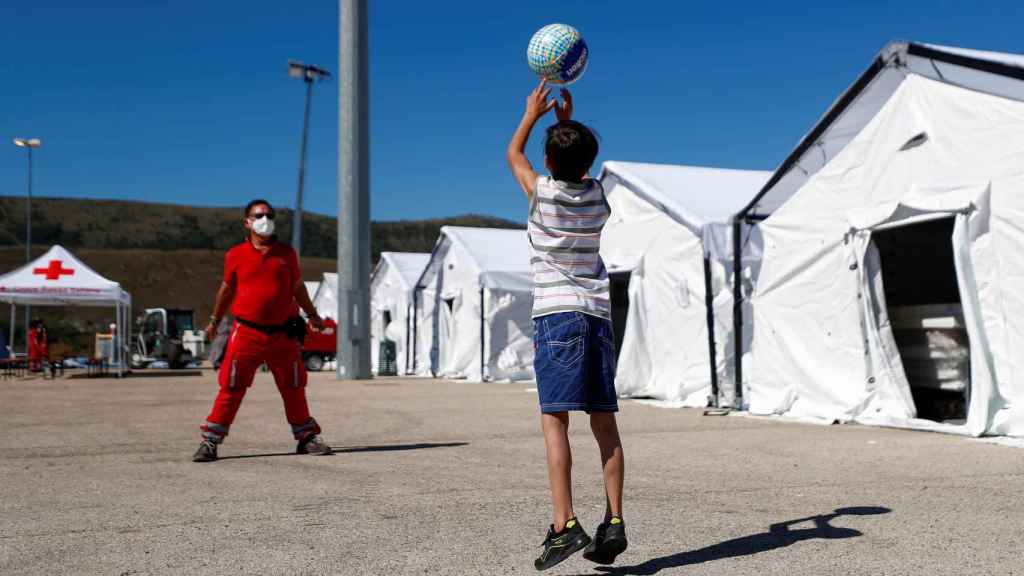 The head of Civil Protection in Abruzzo, Mauro Casinghini, explained that it is temporary accommodation So what little by little other facilities are being located, such as hotels, in the region to give a better reception to these people.

Currently there are 80 volunteers and 15 representatives of the regional civil protection capable of receiving the 1,300 refugees that are expected to arrive in the next few hours, as well as 15 among doctors and nurses to distribute the vaccines.

Italy, which ended its airlift from Kabul on Monday, has managed to evacuate 5,100 Afghans, some of which have been transferred to Army barracks to pass the quarantine period.

Turkey will not welcome Afghans

The Turkish government already warned on Sunday that it can not take care of more Afghan refugees and denied that Europe has made a request in this regard.

“It is out of the question that we deal with an additional refugee burden any longer.”Turkish Foreign Minister Mevlüt Çavusoglu declared this Sunday during a press conference with his German counterpart, Heiko Maas.

“We have fulfilled our moral and humanitarian responsibilities regarding migration,” the Turkish minister added after a meeting with Maas in the Turkish city of Antalya.

The UN recalls that in Afghanistan 3.5 million people live as displaced by violence

Turkey argues that it already hosts some 5 million refugees, including 3.7 million Syrians and some 300,000 Afghans.

The head of Turkish diplomacy denied that Germany has asked Turkey to host Afghan refugees who are fleeing their country after the Taliban takeover of Kabul. “This offer has not reached us. Neither from Germany nor from other countries”, he clarified.

For his part, Maas, who will visit Qatar, Uzbekistan and Pakistan next week, warned that it is necessary to “prevent another humanitarian catastrophe” to avoid a wave of refugees like the one that occurred in Europe in 2015 due to the civil war in Syria.

The UN recalls that in the Central Asian country 3.5 million people live as internally displaced persons because of the violence. And of them, half a million have been forced to leave their homes in the last eight months.

In addition, 2.3 million Afghan refugees live in Pakistan and Iran, the two neighboring countries that have opened doors to this population during the 40 years of conflict.

Published On August 31, 2021
By thecanadian
Categories