It is not possible to distinguish whether the wood on the floor creaks, twists, is old or under the weight of history. They sound so loud that they almost muffle the voice of Encarna, the receptionist at the Hotel Madrid, located in the center of Las Palmas de Gran Canaria. “Yes, yes, Franco slept in this bed”, He says. And he did not do it just any day: the future dictator spent there the night of July 17 to 18, 1936, the key hours in which the uprising that he had been plotting with the rest of the coup generals precipitated and which led Spain to three years of bloody civil war.

Room number 3 of the Hotel Madrid, a building from the early twentieth century with a beautiful yellow modernist facade, that looks like paper, and that shares a small square in the Alameda de Colón with the Literary Cabinet, maintains a face that is practically identical to that of 85 years ago . The door, which continues to be opened with a metal key and not with a card, the bed, the dresser, the built-in wardrobe and the mirror are the same ones that welcomed Franco. But the furniture does not speakThey do not describe the content of the conversations that the general had in there; nor did the chill — if he felt it — when he learned during the early morning that the fuse had been lit in Melilla, that the future loomed more uncertain than ever.

At that time, Francisco Franco was the general commander of the Canarian archipelago, based in Santa Cruz de Tenerife. On July 17, 1936, he arrived in Las Palmas de Gran Canaria, authorized by the Government, to preside over the mass of the General Amado Balmes, a military commander of the local garrison, who died the previous day in an “accident” during target practice. The death of the military man – a recent investigation by Ángel Viñas, Miguel Ull and Cecilio Yusta has shown that it was a “murder”, the first pistol shot of the military rebellion – freed the future caudillo, who escaped on the plane Rapid Dragon to Morocco, where he would take command of the insurrection.

Facade of the Hotel Madrid, which overlooks the Alameda de Colón.

Franco, during those dizzying moments, decided to stay at the Hotel Madrid. Room number three, his, on the first floor — he also reserved room 11 for his wife Carmen Polo and his daughter, with whom he traveled—, has generated a special curiosity in recent decades among guests and tourists. The workers of the site assure that there are people who expressly demand the stay and that many historians have asked to sleep in the same tile bed, resistant to the passage of years and dreams, that the dictator used.

But the attraction for Franco’s bed reaches deep into Hollywood. Producers of Allies (2016), by Robert Zemeckis, they rented the entire hotel during the filming of the film. Brad Pitt, one of the protagonists of the film together with Marion Cotillard, informed of the history of the place, did not hesitate to rest for a while on the aforementioned cot and immortalize it with a photograph. There they have also been seen Gregory Peck, who recorded Moby Dick in Las Palmas in the 1950s; or Uma Thurman. The socialist Jose Bono, former president of Congress, is used to taking his friends to visit the room, which he has asked to be kept as it is as a historical document. The ex-president Pascual Maragall has been fell victim to curiosity. 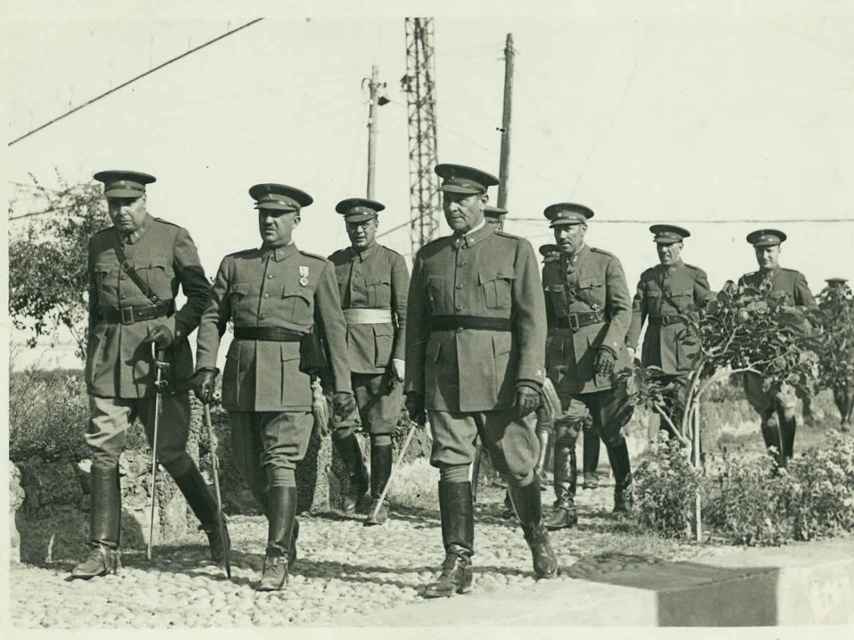 Franco in the center, next to Balmes (right) in a photo from May 1936.

The burial of General Balmes took place at noon on July 17. Franco’s escort had to be reinforced due to some rumors of a possible attack against him. In the afternoon he would have met at the Hotel Madrid and in the adjacent cafe with some officers from Las Palmas. According to some accounts, dined with his cousin Francisco Salgado-Araujo, alias Pacón, and with the military legal commander Martínez Fuset and he went to bed early.

The later leader would also have had a talk at his place of lodging with the Italian consul Ruggero Martin. In his latest book, The great mistake of the Republic (Criticism), Ángel Viñas narrates that that same day Franco sent General Orgaz to visit the consular agent to request three Italian passports from you —For the two of them and for Pacón, presumably. “Franco ordered Orgaz to say that the next day he would send the necessary documents (including photographs),” says the historian. “Now, around three in the afternoon of the same day, Orgaz indicated to the fascist official that passports were no longer necessary.”

During the night, the general received a telegram announcing the uprising in Melilla. At 5:15 in the morning, he sent the following message to the rebels, which he had sent from Santa Cruz de Tenerife, perhaps to make believe that he was at his post: “Glory to the heroic Army of Africa. Spain above all. Receive the enthusiastic greetings from these garrisons, who join you and other peninsula colleagues in these historic moments. Blind faith in triumph. Long live Spain with honor. General Franco. “An hour later he was sent to the chiefs of the Organic Divisions, the general commander of the Balearic Islands (Goded) and, among others, to the chiefs of the Naval Bases, but was intercepted by the central telegraphic communications of the Republic José Giral, then Minister of the Navy, began to send counter-orders. 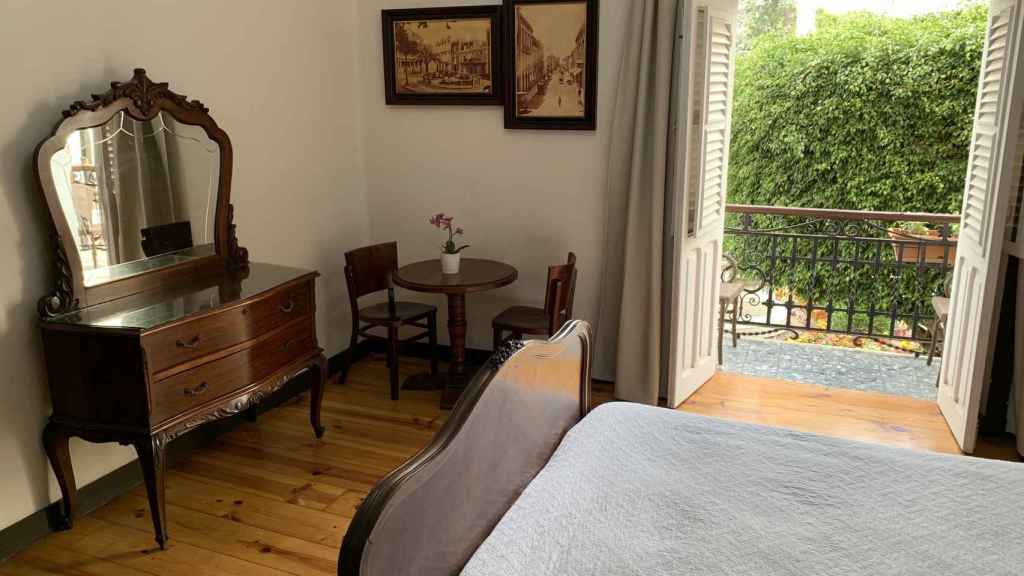 Another image of room number three at the Hotel Madrid.

Franco’s departure from Las Palmas was a very careful operation. On the morning of July 18, he traveled to the San Telmo dock with his cousin and José García de la Peña and Jiménez-Camacho, at that time infantry captain, pilot, retired in 1931 after availing himself of the Azaña decrees. The three were dressed in civilian clothes, without a military uniform, according to the sailor Francisco Monzón Ortega, one of the members of the felucca that led the trio to the tugboat Spain II. His destination was the bay of Gando, where he waited with the engines running. Rapid Dragon, who had arrived in Las Palmas on the 14th. 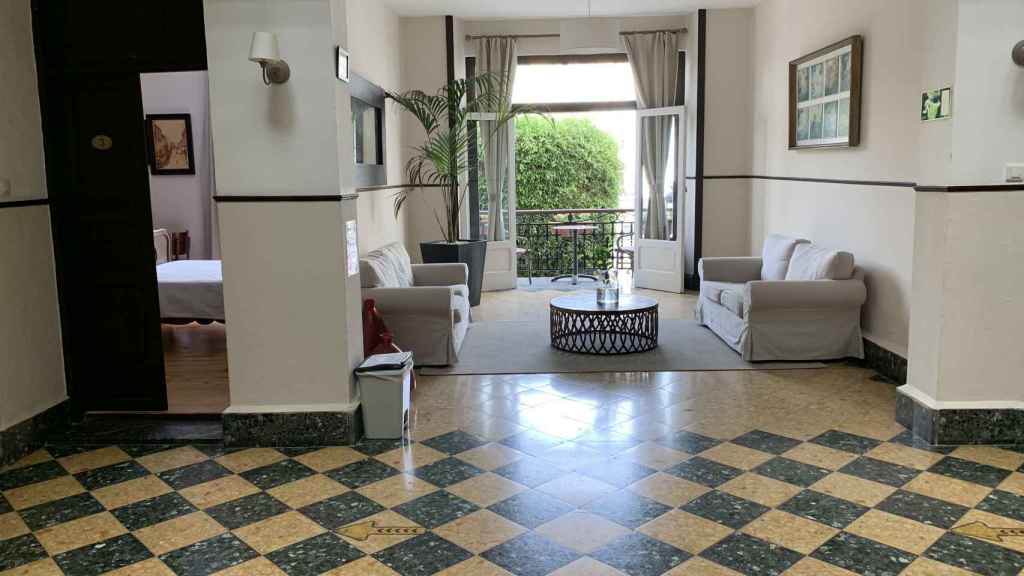 The first floor of the Hotel Madrid, in Las Palmas. On the left, the door of the room where Franco slept on the night of July 17-18, 1936.