With the end of bipartisanship, the governability of Spain remains in the hands of the understanding between the political forces and the state of health of the possible coalitions. Still pending that the polls reveal the majorities with numbers to occupy Moncloa in 2023, the GESOP survey for the newspapers of the Prensa Ibérica group shows that, given a choice, the Spanish are betting on a great coalition between the PP and the PSOE.

33.8% of those surveyed consider that Alberto Nunez Feijoo -with between 140 and 144 seats, according to the same survey- and Pedro Sanchez -with between 93 and 96- must roll up their sleeves to understand each other and govern together, while 30% prefer that the socialists reissue the leftist pact with United We Can, which would be left with between 29 and 32 parliamentarians.

Only 17.1% of Spaniards choose an alliance between the popular and Vox, in a right-wing equation in which Ciudadanos is no longer considered, as it is left out of the Congress of Deputies, according to forecasts. 13% admit that they do not recognize themselves in any of these possible coalitions and another 6.2% do not know or do not answer. 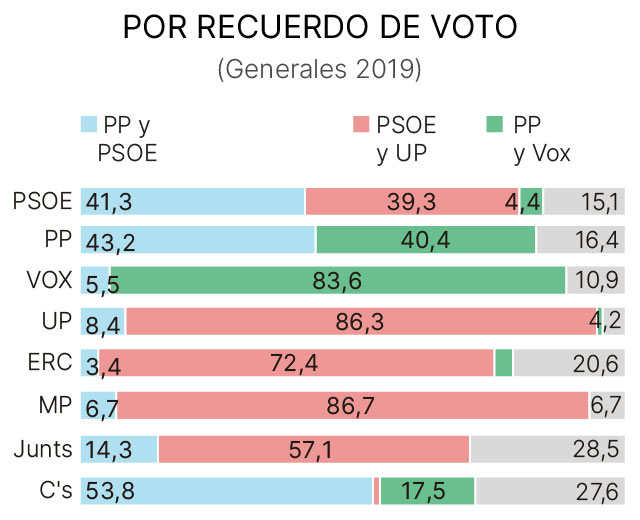 Regardless of the force with which the groups gain access to the lower house, the socialist voters they face the dilemma of electing government partners for a new legislature divided, although the balance tilts -by very little- towards the PP. 41.3% of PSOE voters in 2019 believe that Sánchez should agree with Feijóo, while 39.3% prefer to continue in Moncloa hand in hand with the purples, with Yolanda Díaz at the helm. 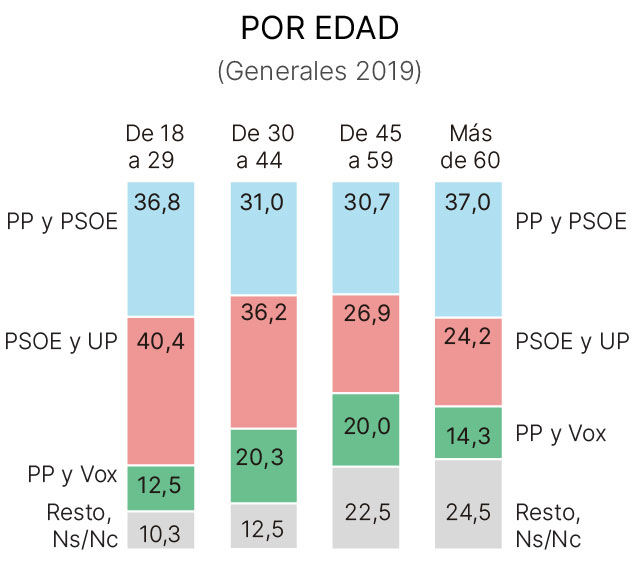 The popular supporters They are not entirely clear either: 43.2% prioritize a grand coalition with the PSOE, but 40.4% are committed to opening the doors of the Government to Vox. Currently, the ultras hold the vice presidency of the autonomous executive of Castile and Leon after agreeing with the PP. Arriving at Moncloa would be a milestone for the extreme right and a celebration for its voters because 83.6% of them want the party in which they placed their trust in 2019 to govern the country alongside the PP. 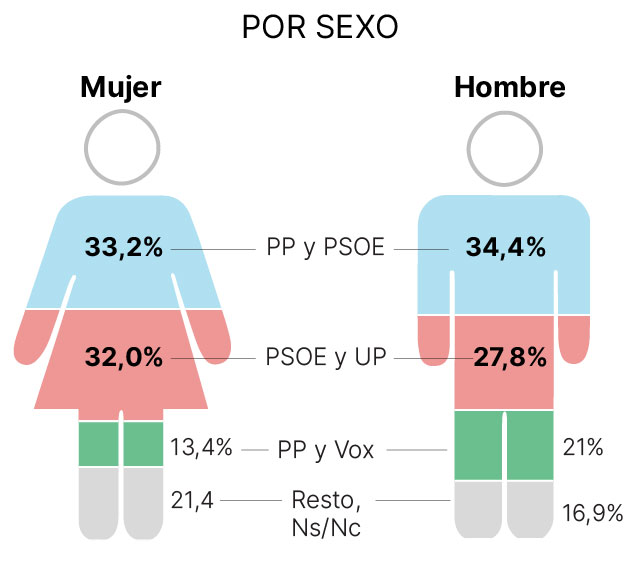 Between the loyal to United We Can there are also no doubts about which would be the best possible government: 86.3% show the will for training to continue in the Government together with the PSOE. Those who bet three years ago on More Country think the same way.

Those who chose the orange ballot In 2019, the majority (53.8%) favor a PP-PSOE pact and only 17.5% prefer that the central Executive remain in the hands of the popular and the extreme right.

The Catalan separatists (the ERC and Junts voters) are much clearer in their preferences and prioritize that the PSOE ally itself with United We Can for four more years. Within the pool of Republican supporters in the last general elections, 72.4% prefer that the current left-wing government pact be reissued, while among post-convergent voters this percentage drops to 57.1%, since 14.3 % see it more convenient for the PP to agree on a coalition with the PSOE.

-Population: Adults with the right to vote.

-Type of sampling: Proportional by autonomous communities and municipality size. -Selection of the person to be interviewed according to crossed quotas of sex and age.