A photo taken by NASA of the Moon’s surface has been shared thousands of times on social media posts along with the claim that the photo proves that the planetary mass was previously split in two. But the claim is false: the photo shows Rima Ariadaeus, which experts say is a fault system similar to those on Earth. NASA has also refuted the claim, saying there is no scientific evidence that the Moon has split into two or more parts.

A collage of four photos has been shared more than 260 times since it was uploaded to an Islamic Facebook page. here on August 5, 2019.

The photo is titled: “The miracle of the prophet Muhammad (peace be upon him) ‘Splitting of the moon'”.

An image in the collage shows the surface of the Moon, with an arrow pointing to a supposed rift seen on the Moon.

Text overlaid on the image reads: “This is the location of the rift that runs the length of the moon.”

The post’s caption reads: “The Koran says… The hour has drawn near and the moon has parted.” [in two]….

“This miracle was also proven by NASA. {Quran and science}.” 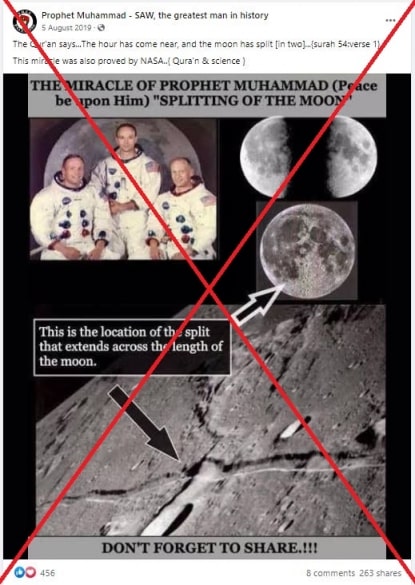 The second photo in the collage shows the American astronauts. Neil Armstrong, Michael Collins, and Edwin “Buzz” Aldrin Jr. from Apollo 11the first lunar mission landed humans on the Moon in July 1969.

The claim, which has been circulating online among Muslim internet users in various countries such as Indonesia and Pakistan for years, refers to the story of a miracle performed by the Prophet Muhammad, which stems from Chapter 54 Verse 1 of the Koran.

The posts, still republished as of April 2022, claim that the “moon crack line” photo was taken from Apollo 10 and Apollo 11.

That image also circulated along with a similar claim in Indonesian, as in East Facebook post and on East YouTube video, which has garnered over 5.4 million views.

But the statement is false.

Reverse image searches trace the source of the photo back to the US National Aeronautics and Space Administration (NASA) website, which published the picture in 2002. 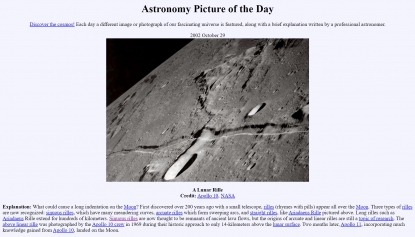 A screenshot of the original photo on the NASA website, taken on April 28, 2022

NASA said the photo, taken by the apollo 10 crew in May 1969, shows ariadeo rhyme — a long rille or lunar trench.

As explained by NASA here“Rivulets, such as Rima Ariadaeus, are thought to be faults that formed as a result of tectonic activity. Some scientists believe linear rilles could have formed after large impact events, while others believe the rilles formed as a surface manifestation of deep dike systems when the moon was still volcanically active.

“Experts agree that Rima Ariadaeus, about 300 km (186.4 miles) long, is a fault system similar to those on Earth.”

Below is a screenshot of a photo of Rima Ariadaeus taken by NASA from a different angle: 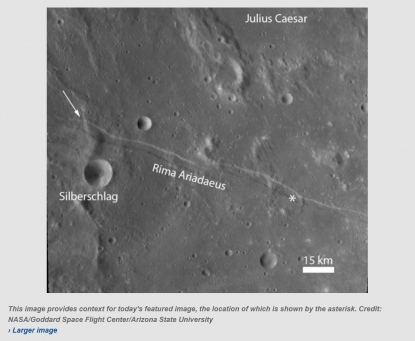 NASA responded to the claim. here when a social media user flagged it in 2010.

“No current scientific evidence reports that the Moon was split into two (or more) parts and then reassembled at some point in the past,” said Brad Bailey, staff scientist at NASA’s Lunar Science Institute.

Professor Paul Grootan astronomer at Radboud University in the Netherlands said: “The ‘division’ indicated in the lower image [in the misleading image] it’s present on the Moon, but it definitely doesn’t extend around the Moon.”

“It is a feature that is likely related to the impact that created the Tycho crater, which is in the bottom right of the feature in image orientation,” he told AFP by email.

Other images of the Moon

The image showing two half moons is a composite made from two different photos of the Moon, available on the website of the Getty Images photo agency.

The first photoThe left part of the image is titled: “Last Quarter Moon” and shows the moon approaching its last quarter phase.

Below is a comparison of screenshots of the image in the deceptive post (middle) and the genuine photos (left and right):

The last photo in the misleading post, showing a full moon, can be found on the website of tufts universityin Massachusetts.

The photo is credited to the University of California. Lick Observatory.

Below is a screenshot comparison of the image in the deceptive post (left) and the genuine photo (right): 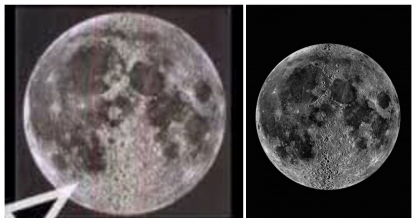