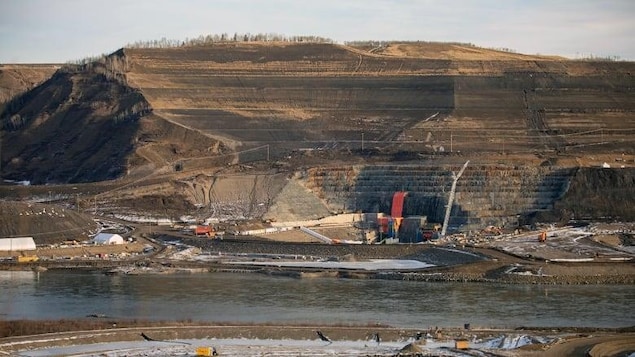 A joint statement from the Government of British Columbia and the Government of Canada, released Monday afternoon, says the settlement includes an agreement on the impacts and benefits of the construction of the dam between BC Hydro and the First Nation, in addition to two agreements to obtain contracts.

Five thousand acres of provincial Crown land will be transferred to the First Nation, for its part, the latter will have to stop its claims against the Site C project.

In its civil suit, West Moberly First Nation also claimed that the existing dams on the Peace River and the cumulative impact of resource development on its traditional territory violate its treaty rights. The parties have agreed to stay this portion of the civil action. In addition, the provincial government and West Moberly First Nation have agreed to enter into confidential nation-to-nation negotiations to resolve outstanding issues.

Chief Roland Willson sighs as he explains what this partial settlement means for his people. We, as a community, have realized that they will not stop. [Nous sommes] painfully aware that we have lost the valley.

The Site C project, the third in a series of four dams in the Peace River region, was first proposed in the 1950s, abandoned twice in the 1980s, and brought back to life by former Liberal Prime Minister Gordon Campbell in 2010.

West Moberly First Nation has filed a civil lawsuit against British Columbia, BC Hydro and the Attorney General of Canada in 2018 and lost a bid for an injunction order the same year.

BC New Democratic Party leader John Horgan opposed the Site C dam before being elected premier, but went ahead once in office.

Last year, John Horgan said the province would lose more than $10 billion in sunk costs if it decided to back down. The estimated cost of building the dam has soared to around $16 billion.

Roland Willson explains that he was reluctant to settle this matter amicably, but that his community felt that it no longer had a choice.

” It’s difficult to discuss it because the project should never have seen the light of day. All Treaty 8 Nations have approached [l’ancien] liberal government [de la province] with the idea of ​​working together on an energy development project for the province, but they had their fixed idea of ​​site C. »

They kicked the BC Public Utilities Commission out of the process so they couldn’t deny it a third time.he adds.

In a statement, the president of BC HydroChris O’Riley, acknowledges that this agreement was a difficult decision for the First Nation.

Building respectful and meaningful relationships with West Moberly First Nation and all Treaty 8 First Nations impacted by Site C is a priority for BC Hydrosaid Chris O’Riley. These agreements provide us with a foundation to move forward together in a way that fosters a mutually beneficial relationship.

Energy Minister Bruce Ralston also acknowledged the First Nation’s concerns in a statement, but said he believes the agreements recognize and mitigate the impacts of the Site C project on First Nations while ensuring that they benefit from the project.

The ministry says the First Nation will receive an initial lump sum payment and ongoing payments over the first 70 years of Site C’s operation, as well as 5,000 acres of Crown land yet to be identified.

Roland Willson maintains that Site C is a flagrant violation of the treaty and a clear violation of our rights. But now is the time for healing, he says.

Based on information from The Canadian Press, Meera Bains and Josh Grant

Published On June 28, 2022
By thecanadian
Categories