A mentally ill man who stabbed and killed five young men at a Calgary home party seven years ago may be in a group home for Christmas, but is a long way from being released back into the community, a review board heard on Monday. Wednesday.

Matthew de Grood, 30, was not found criminally responsible for the 2014 murders of Zackariah Rathwell, Jordan Segura, Kaitlin Perras, Josh Hunter and Lawrence Hong because he was suffering from schizophrenia at the time.

He appeared at his annual Alberta Board of Review hearing to assess his treatment and whether he should be allowed greater privileges or freedoms over the next year.

The review board is expected to publish its decision in a few weeks.

The board heard that De Grood’s psychosis is in full remission and that there have been no problems with taking his medications.

A psychiatrist treating him at Edmonton’s Alberta Hospital said transitioning to a group home is the next logical step, but recommended that de Grood remain on a full mental health order rather than receive a conditional discharge.

“There are some important uncertainties,” said Dr. Santoch Rai. “The treatment team has decided to resolve those uncertainties in favor of what we believe is a necessary consideration of the safety of the public.” 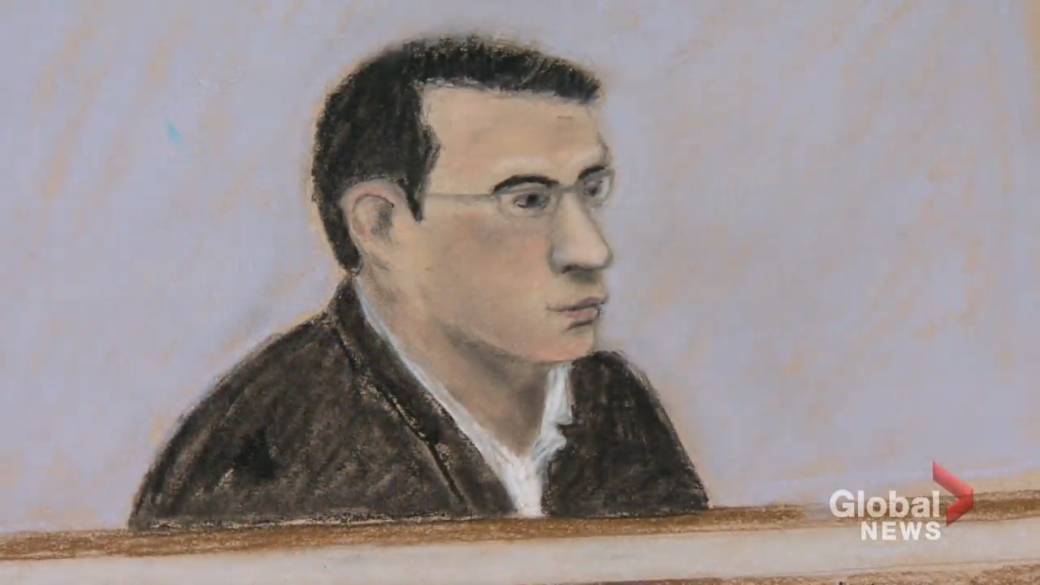 Rai said the mental health order allows De Grood to be returned to the hospital immediately if he deteriorates and stops taking his medications.

“It can seem really cool to the point where you can actually function in a work environment in the morning and then at night to do something very serious,” he said.

He has the “ability when sick to inflict very serious harm on several people and to do so very quickly.”

De Grood’s trial revealed that he was a college student who attended the party that was being held to mark the end of the school year. He attacked others there believing that the devil was speaking to him and that a war was about to start that marked the end of the world.

A judge ruled that he was delusional at the time and did not understand that his actions were wrong.

Rai said De Grood could eventually be allowed more freedoms, but “I think we’re a long way from that.”

He also said it could be beneficial for De Grood to return to Calgary to be closer to his family. But De Grood’s attorney, Allan Fay, said at the hearing that his client is not requesting the move and wants to stay in Edmonton for the foreseeable future.

De Grood, wearing a mask, addressed the review board and said he’s not asking for sympathy.

“I accept what I have done and I am very sorry. I just hope that one day I will be seen as a person capable of earning my way back to society. The weight of this tragedy is on my shoulders and it has not been alleviated over time, ”he said.

“I carry the shame and guilt with me 24/7 and I will do it forever. I want to make amends in any way that I can. I am committed to managing my illness ”.

Doug and Susan de Grood also filed a statement with the board saying that their son is a human being and not a monster.

“Nothing prepared us for the growing crusade to seek life-long punishment for Matthew. We feel the need to remind those who seem to have forgotten that Matthew has already gone through trial and was found not to be criminally responsible, ”they wrote.

“However, some people feel that the review board hearings each year should be treated as a search for justice.”

The board heard statements from the victims’ families. Many were frustrated and angry.

“This is the sixth victim impact statement that I will present since Matthew de Grood took the life of my son Joshua. Every year I struggle with writing to honor Josh, ”said Kelly Hunter.

“I get so sad sometimes that I can’t seem to think of Josh without feeling sad because he’s not here anymore. I miss him so much “.

Shannon Miller said nothing will take away the pain of losing her daughter Kaiti.

“The truth is that Kaiti did not die. She was murdered and there is a big difference between the two, ”he said.

“How do you articulate that Kaiti is ripped from my life? She was my girl. She was a part of who I am and now that is gone forever. It tears me apart. “