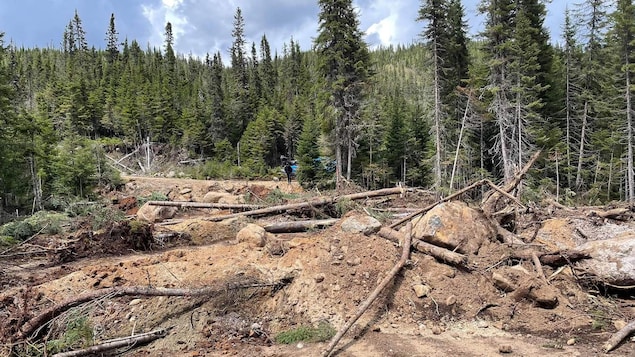 On June 4, two members of the Innu community of Mashteuiatsh filed a complaint indicating that their land, located near Petit lac Jacques-Cartier, had been vandalized. Trees have been felled, ongoing developments have been destroyed and access to said land has been blocked with trenchesit has been reported.

In response, the Pekuakamiulnuatsh First Nation, which also considers itself at home in the Laurentides wildlife reserve, sent a formal notice.

Appalled, the Innus of Mashteuiatsh notably summoned the Huron-Wendat to restore the land to its original condition within ten days. Chief Gilbert Dominique denounced in passing illegal and highly reprehensible acts, both civil and criminal.

The Laurentides Wildlife Reserve is coveted by the Huron-Wendat Nation and by the Innus of Mashteuiatsh. The two peoples claim ancestral rights there, but do not agree on its division.

The Grand Chief of the Huron-Wendat Nation, Rémy Vincent, sent his reply to Chief Dominique on Monday, on the last day of the prescribed deadline. At no time does he make direct mention of the restoration of the land requested by the Innu or of the actions that could have been taken by the Huron-Wendat.

As he did in a public outing following the event earlier this month, he instead invites his counterpart to meet with him to engage in dialogue on their respective land claims.

In response to your letter of June 7, 2022, the Huron-Wendat Nation proposes the path of diplomacy. We would like talks to be initiated without delay to identify our disagreements and explore possible solutions.Grand Chief Vincent wrote on June 17.

” This, in my opinion, is the path that must be favored in the best interest and for the benefit of our respective peoples. »

Earlier this month, Rémy Vincent said he was open to negotiating and open the books.

I would like the Innu party to be responsible, to come and sit down with us and for us to finally get all this straightened out. If there really is historical, archaeological evidence that is satisfactory, well, we’ll sign a treaty and we’ll draw a linehe said.

Until then, Wendake will take the actions necessary, he warned, to ensure his territorial self-determination. The Council of the Huron-Wendat Nation argues that the Huron-British treaty of 1670 gives it exclusive rights over the Laurentides wildlife reserve.

The Innu in reflection

In a letter sent this Thursday to Grand Chief Rémy Vincent, Chief Gilbert Dominique immediately notes the lack of commitment from the Huron-Wendat to restore the land.

We first note and take note of the fact that the Huron-Wendat Nation, following our formal notice of June 7, has not disengaged from the acts committed, nor has it proceeded with the repairs claimed and requiredcan we read in the missive.

Chief Dominique says his community will initiate rehabilitation work itself. Given your failure to restore the premises, we will proceed with the necessary work for this purpose. Pekuakamiulnuatsh.

The Chief of the Mashteuiatsh Band Council, Gilbert Dominique

As for Rémy Vincent’s proposal to initiate a dialogue under the sign of diplomacy, Gilbert Dominique pleaded for patience, underlining the gravity of the situation. In our collective memory, no act of aggression bearing on the legitimate exercise of our ancestral rights had occurred, which is of particular concern to us.he wrote regarding the grounds.

” Recent events require us to give adequate and informed thought, with the necessary perspective, before sending you a more complete and consistent response. It should therefore be able to be sent to you in the next few days. »

Recent conflict, according to Wendake

According to the Huron-Wendat, their territory was not contested by the Innu, until recently.

In the collective Wendat memory, no territorial issue worthy of mention arose between our Allied Nations, except at the turn of the millennium.writes Rémy Vincent in his letter of June 17. The recent conclusion of the General Agreement in Principle, on March 31, 2004, gave rise to a disagreement between our Nations that still persists today.

The agreement in question, reached between the federal and provincial governments as well as four Innu communities, added what is called the southwestern portion of Nitassinan. This ancestral territory on which the Innu claim rights straddles the Nionwentsïo over a very large area.

The 2004 Comprehensive Agreement in Principle delimits the territories of four Innu First Nations, including Mashteuiatsh, in green. The blue portion is the southwestern part claimed by the Innu and is located in the heart of Nionwentsïo, ancestral territory of the Huron-Wendat Nation delimited in red.

Photo: Council of the Huron-Wendat Nation

Wendake regrets that no serious discussion has been undertaken on these claims for all these years, despite a judgment by the Federal Court in 2014, encouraging talks to clarify the situation.

Grand Chief Rémy Vincent accuses Quebec and Ottawa of having themselves created the conflict. He summons the two levels of government to assume their responsibilities and also initiate work to clarify the territorial boundaries of the two nations.