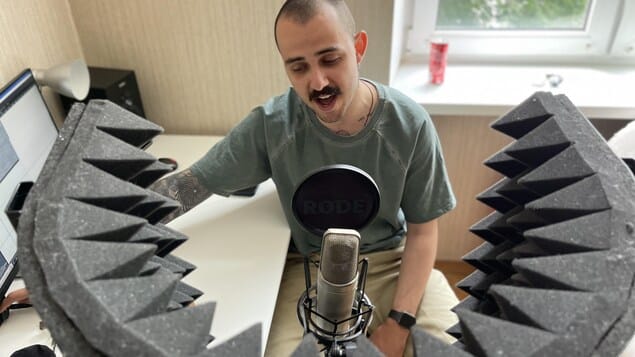 There’s a lot of mumbling in rap today, but it shouldn’t be. Rap allows us to talk about society and its problems, it must talk about the fight against systems.

Slava, in his kyiv neighborhood where murals and graffiti abound.

In the music videos that illustrate his protest songs, you will not find clichés of culture bling bling with luscious girls who are sometimes objectified or even have a passion for firearms. Well, almost not…

Yes, Slava has an AR-15 type semi-automatic assault weapon, but for a very different reason: he recently became a sniper in the Ukrainian army.

” We have killed soldiers in shootings. It was the first time I had seen the enemy’s body. I was disgusted for a whole day, but after that it’s pretty easy to accept the realities of war. »

At the outbreak of the Russian invasion, he enlisted in the Azov regiment, famous for its fierce defense of the Azovstal metallurgical plant in Mariupol. Regularly, he returns to the front. Now we are bringing the bodies of our soldiers from Mariupol, but also from Zaporiyja and other combat zones.

He made a song out of it, Find My Countrywhich he dedicated to his brother always on the line of fire. It’s the first song I wrote after the war started. She talks about the feelings soldiers and civilians have in Ukraine.

In addition to his personal commitment to the front, he organizes fundraising campaigns to raise money for the Azov regiment.

The involvement of rappers like Slava in the conflict is not unique, says Maksym Komliev, deputy editor of the magazine slukh.media. Some of these rappers have become warriors in the field and sometimes when they come back from the front they write songs to express themselves about the war. It’s quite surprising.

Emil Lam, known as the rapper Cloudy Joint, denounces the invasion of his country by the Russians through his songs.

Emil Lam did not go to the front. This young rapper in his twenties, who is also a sound engineer to make ends meet, uses his art to denounce the Russian invasion, even if it does not bring him much for the moment. In Ukraine, if you want to make money with your music, you have to do business. The artists undergroundthe rappers who make hip hop or oldschoolit’s not that they want money, it’s a matter of mind.

Under the name Cloudy Joint, he wrote Kossak, the story of a Russian soldier he wants to challenge to a duel. The rapper describes himself as a member of the Cossacks, these 16th century warriors, who want to put an end to Putin’s invasion. Failing to be at the front, he is like a soldier of words. The conflict changed him, but did not alter his style, he admits. My life may have changed, my conscience too, but not my rap; my rap is my life.

Rapper Slava is an active member of the Ukrainian army.

Slava, the soldier rapper, affirms like many Ukrainians that his country will emerge victorious, but that the war will be very long. I don’t know when my new album will be released because I’m still serving my country for now. Maybe late summer or next fall.

Probably between two military operations that he will soon lead with the Azov regiment. In the meantime, he hopes that the international community will continue to be at his country’s side.