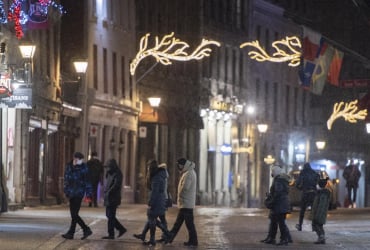 With the relentless rise of the Omicron variant now pushing the number of COVID-19 cases to new highs almost daily, Canada’s governments are fighting back with tighter pandemic restrictions.

Quebec Prime Minister François Legault has announced the re-imposition of a 10 pm-5am curfew that begins tonight, New Year’s Eve, and will remain in effect indefinitely. In addition, restaurants in the province are required to close their dining rooms starting today and only serve take-out food, while private indoor gatherings are prohibited.

Get the best news delivered to your inbox.

The rapid increase in COVID cases has prompted some provinces to modify their back-to-school plans by extending the holidays. In Ontario, the resumption of face-to-face classes will be delayed until Wednesday, in Alberta until January 10 and in Quebec until at least January 17.

Nova Scotia has announced that starting Monday, people 30 and older will be eligible for booster shots, while in Ontario, publicly funded PCR testing is restricted only to high-risk individuals who are symptomatic or with risk of serious illness.

Meanwhile, a new study from Public Health Ontario suggests that those infected with the highly transmissible Omicron variant are significantly less likely to be hospitalized or die compared to those with Delta. Still, the Public Health Agency of Canada noted Thursday that an average of 1,892 people with COVID-19 were being treated in Canadian hospitals each day this week, which is 23 percent more than last week.

This Canadian Press report was first published on December 31, 2021.