San Francisco police are searching for a gunman who opened fire on a busy passenger train last week, killing one person and wounding another.

Police received reports of a shooting on a San Francisco Muni train just before 10 a.m. Thursday as the light rail was moving between stations.

Officers rushed to the city’s Forest Hill Muni Station, only to discover that the train had just left.

They were then able to catch up with the commuter train at the busy Castro Street station, where passengers and the gunman ran from the train as soon as it stopped and the doors opened.

The shooter appears to have gotten away with the crowd.

Authorities have now released a photo of a ‘person of interest’ in the case.

San Francisco police on Wednesday released a still from surveillance footage of a ‘person of interest’ in a shooting aboard a commuter train just before 10 a.m.

The footage shows a black man wearing a black hoodie and jeans, white sneakers and a black baseball cap with blue headphones around his neck and a red backpack. Police have not gone so far as to call the man a suspect, instead saying they would like to speak to him.

“Most of the people on the train got out quickly,” Officer Kathryn Winters said at a follow-up news conference, adding that police were not sure how full the train or the station was at the time of the shooting.

Two victims were discovered at the scene and a 27-year-old man was pronounced dead despite firefighters attempting CPR. San Francisco Chronicle reports.

The other victim, a 70-year-old woman, was taken to Zuckerberg San Francisco General Hospital and Trauma Center after being shot in the knee. She is expected to survive.

An investigation into the shooting is underway, and on Wednesday night, San Francisco police released surveillance camera stills of a “person of interest” in the case.

It shows a black man in a black hoodie and jeans, white sneakers, and a black baseball cap with blue headphones around his neck and a red backpack.

Police are now asking ‘this person to come forward and speak to investigators’. The suspect was previously described as a male of an unknown race wearing dark clothing and a hooded jacket.

Anyone with information should also call the San Francisco Police Department tip line at (415) 575-4444 or text TIP411 and start the text with ‘SFPD.’ All callers can remain anonymous. 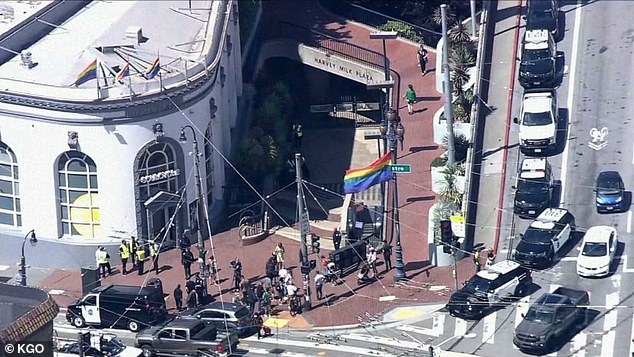 Police cars are seen lining up outside the busy Castro Street station Wednesday morning following reports of a shooting aboard a commuter train. 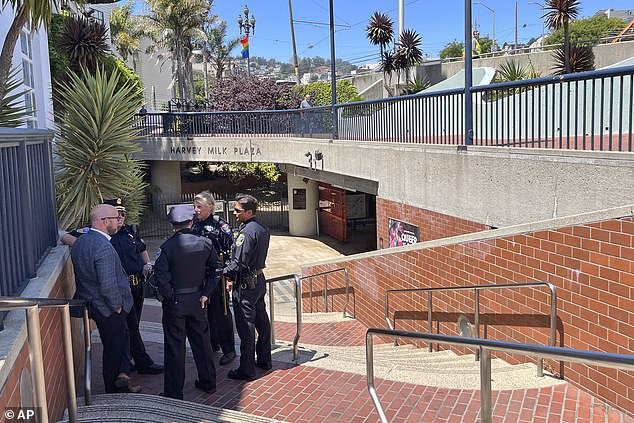 Authorities say they believe the shooting began after the gunman and a deceased 27-year-old victim got into an argument. A 70-year-old woman was also shot in the knee, but she is expected to survive.

The shooting reportedly occurred after the gunman and the deceased victim got into a verbal argument, according to Supervisor Myrna Melgar.

“The shooter pulled out a gun and shot the guy he was arguing with,” Melgar told the Chronicle. “The second victim was not involved in the verbal altercation, but it turned out that she was right next to the other victim.”

Supervisor Rafael Mandelman, who represents the Castro district, also said the victim and suspect appeared to have known each other.

“It’s cold comfort, but it doesn’t feel like this was random,” he said. ABC 7. ‘It wasn’t someone who, you know, got on the train and just started shooting, which would have been even more horrible.

This was horrible enough.

Witnesses reportedly heard three to four gunshots just as the train pulled out of the Forest Hill station, according to Melgar, who urged passengers who were on the train and witnessed the shooting to contact police immediately.

Meanwhile, authorities tried to assure the public that the shooting does not appear to be related to an upcoming Pride Parade in the area.

Police said in a statement that they “would like to assure community members and visitors that this incident appears to be an isolated one, and that we do not believe it is related to the Pride festivities or is targeting any group or community.” 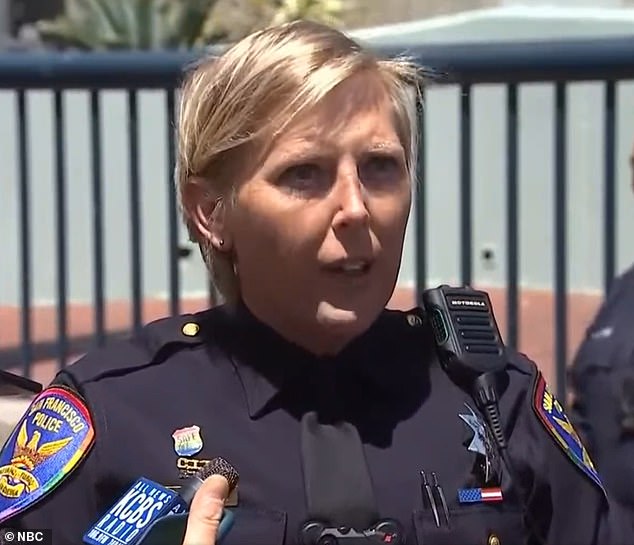 At a news conference, Officer Kathryn Winters tried to assure the public that the shooting does not appear to be related to an upcoming Pride Parade in the area.

Residents had accused the district attorney of not doing enough to keep citizens safe and of introducing policies that allowed repeat offenders to commit crimes without fear of re-incarceration.

According to the most recent statistics from the San Francisco Police Department, total crimes increased 7.4% from last year, with a 19% increase in burglaries and a 12.2% increase in aggressions compared to the same period in 2021.

The crime wave has seen a rise in a particular type of robbery called “smash and grab,” where thieves brazenly raid store shelves often in broad daylight, often avoiding charges thanks to lax security policies. Boudin.

It has forced stores across the city to close to avoid falling victim to premeditated and often coordinated strikes.

Still, Boudin, 41, remained defiant, blaming Republican billionaires and even the city’s police for the loss, in a post-defeat speech.

“Right-wing billionaires outspent us three to one,” he said, going on to state that citizens had been ‘exploited’ by these groups, saying that ‘he took advantage of an environment where people are appropriately upset.’

“They created an electoral dynamic where we were literally casting a shadow,” said Boudin, who narrowly won the job in November 2019 as part of a wave of awake prosecutors who vowed to seek alternatives to incarceration.

He asserted that the Republican and Conservative “playbook” involves delegitimizing, instilling fear and remembering.

“It’s a tactic used by people who are increasingly unable to prevail in elections when presenting their views on public safety and justice.” 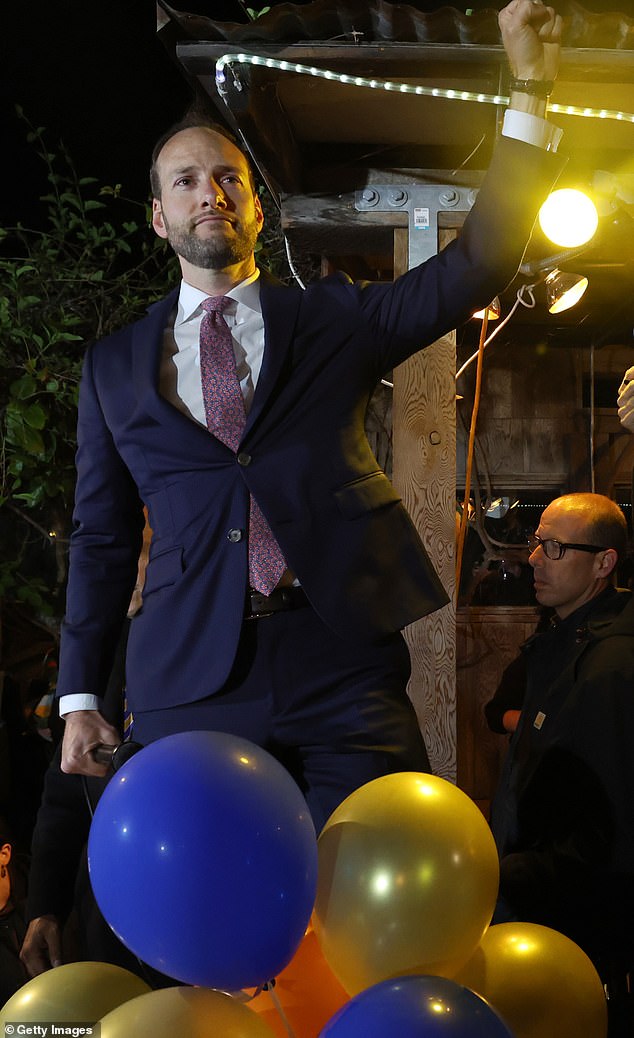 The shooting comes just weeks after voters in the Bay Area ousted District Attorney Chesa Boudin, who stood defiant in a speech following his ouster.

Boudin admitted voters were understandably frustrated by the pandemic, but blamed city officials who he said failed to deliver on safety, housing and fairness as murders and assaults continue to rise from last year. , one of the worst years. crime-wise the city had seen in decades.

He said on Tuesday: ‘We have two cities. We have two justice systems. ‘

“We have one for the wealthy and well-connected and a different one for everyone else.”

“And that’s exactly what we’re fighting to change.”

He added: ‘This was never about a recount of votes. It was never an election night party. This is a movement, not a moment in history.